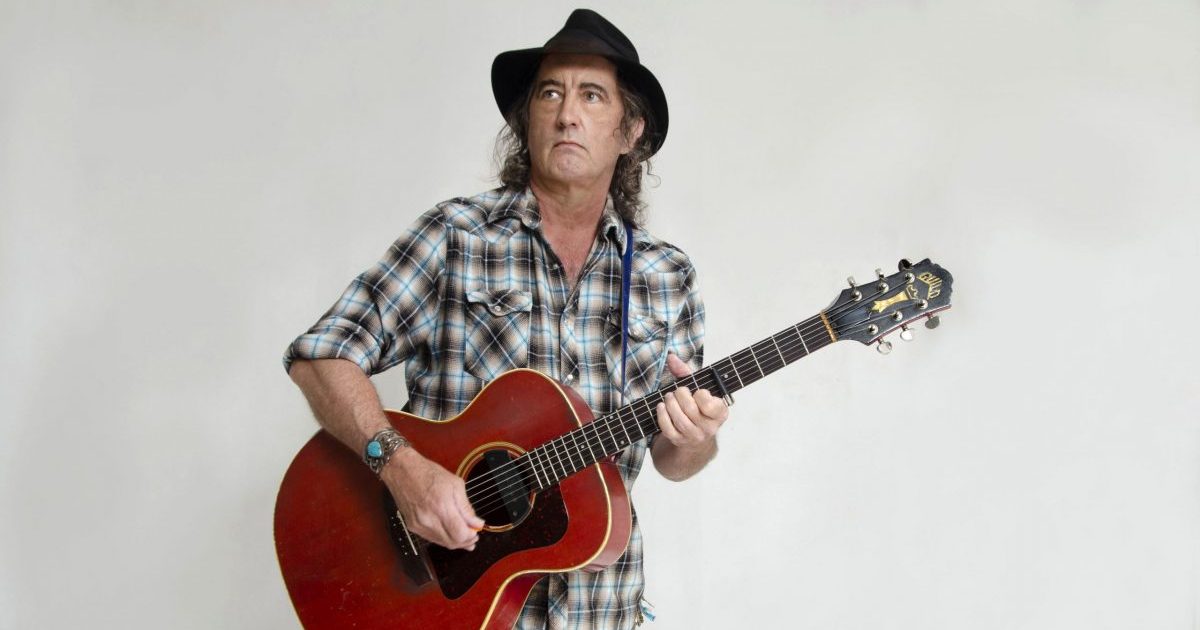 Holding a conversation with James McMurtry is similar to experiencing his music. He is frank, eloquent, and gets to the heart of the matter with few words. On The Horses and the Hounds, his first album of new material in nearly seven years, he tells sometimes complicated emotional stories through his fictional characters, crafted within the limits of rhyme and meter. His deft chronicling of human nature woven with descriptions of place and scene give the listener context beyond the experience, almost like each song is the essence of a short story or novel. In “Fort Walton”, he describes a knotty internal conflict in three lines as his grumpy narrator admonishes himself for losing his temper at his hotel:

McMurtry dialed in to Zoom for this conversation with BGS.

BGS: You recorded this album in L.A. at Jackson Browne’s studio. When you went to do that, did you have a precise amount of songs ready? Do you overcut or undercut?

McMurtry: It depends on the record. I’ve never really overcut by much. This time it was the way I used to do it when I was in my 20s. I sort of metaphorically do my homework on the school bus. The way this one worked out is Ross Hogarth, the producer, knew Jackson and he found a window when we could get into his studio to track, but he said, “You gotta finish the songs by this date.” Most of the songs were finished within the last month before tracking. Some of them I actually finished in a Rodeway Inn in Culver City the night before we tracked it. Sometimes that works. That adrenaline rush of having a deadline will get you through. Very few of the songs were started and finished from scratch for this record. Mostly I work from a scrap pile. I have a laptop. I scroll through my notes app. I scroll through my writing programs and look for lyrics that go together or something that I want to work on right then. But there were a couple like “If It Don’t Bleed” that I wrote specifically for this record.

How often do you write?

Not very often at all. I write when it is time to make a record usually. And that depends on when my tour draw falls off. When I started making records thirty years ago the strategy was to tour to support record sales. The business model was that you were supposed to sell enough records to make royalties and to live off them. That never happened. My records were very expensive to make when I was on Columbia. They never came near recouping their production expense and so I wound up learning how to tour cheap. That came in handy much later when Napster and Spotify turned the whole business on its head. Everybody had to figure out how to do what I and some of my contemporaries were already doing. Which was just drive around in a van and keep everything cheap and profit on the tour.

I’ve read that you don’t consider your songs to be autobiographical. Where do you find your characters? How do you bring them to life?

I am a fiction writer. There will be a little bit of my life in a song but it is gonna get rearranged for the sake of a better story. Usually, I’ll hear a couple of lines and a melody in my head and I ask myself, “Who said that?” I try to envision the character who would have said those lines then I work backward to the story.

Speaking of melody, when you are writing, rhyme and meter are clearly important to you and you are masterful at both. But do you consider melody as you are crafting lines from the get-go?

Definitely. I’ve put words to music a few times. I have had jams with my band that I did off the cuff and years later I’d put lyrics in them, like “Saint Mary of the Woods,” which was the title track to one of my records. That came out of a jam that we recorded just for the fun of it. But it is very hard to put words to music. I don’t think I have ever tried to start with just words and then tried to put music to that. I usually have to get a little bit of melodic sense.

In terms of the song “Operation Never Mind,” you hone in on the lack of information we have about what war and conflict are really like these days. Can you talk about your inspiration for that song?

When I was a kid, Vietnam was still going on in full force. We only had three or four television networks and everyone listened to Walter Cronkite. He was the voice of the center and everyone right left and center listened to him. That war did not end because kids were marching in the streets. We pulled out because Walter Cronkite got enough of it. His generation decided it was a stalemate and we were never going to get out of it so we left. … One of the things that has struck me over the years is that we no longer have actual war coverage. Back in Cronkite’s day, we’d watch the 6 o’clock news and we’d see actual footage from battles and shots of the troops walking along and looking bored and lonesome on a hot dusty day. We got more of a feel for what that war was actually like. Whereas now, we get nothing.

Now they say there are embeds out there with the troops, some of whom are doing very good journalism but it is not front page, because there is no front page. Everyone has their own channel to go to hear their own opinions shot back at them. We just don’t have coverage. We don’t have any idea of what the actual war is like. Or what it is about or why we are there, really. War is big money. I think there are a lot of powerful people who would have just as soon stayed in. That’s kind of what I tried to do in the song. Just remind people, “Hey, we got people in harm’s way over there. As citizens, we are supposed to question why and we are not doing it. Nobody is pointing the way.

In lieu of being able to tour, you’ve been streaming performances, right? How has it been connecting to fans online?

It is a different skill. I have yet to really elevate it to an art form. But it needs to be done. People need to do more of this. A lot of people looked at streaming as a stopgap measure. I’ve gone into it thinking, this might be what I’m doing. I might have to be this twisted Mr. Rogers guy for the rest of my life. I better figure out how to have fun with it. And I have. I can sit here with six or seven acoustic guitars, all of them tuned and capoed for whatever song I’m going to do. It is easy. I don’t have to move a lot of stuff. I’d never carry that many acoustics on the road. They’d take up half the van.

You have a dedicated page to COVID-19 on your website and you’ve been vocal about the pandemic. Have you had any revelations about how the music industry works or things you would like to see changed?

I’ve never had a firm handle on the music industry. I work my little corner of it. I really can’t predict what is going to happen but I do think that Jason Isbell’s mindset will prevail in the concert industry. I’m trying to impose that myself. I don’t play indoors unless you’ve got a vaccination card and a mask. Outdoors I’ll be a little laxer. We can’t have big indoor gatherings with the delta variant going on.

Austin is just rife with breakthrough cases now, especially amongst musicians. Seems like the drummers and the singers get it first because they are breathing down to their toenails. Drumming is an extremely aerobic activity and the same with singing. If there is some viral load hanging in the air, a singer is going to get it probably. It’d take two hands to count the cases — fully vaccinated COVID cases — among Austin musicians. And that’s just this morning.

I’ve played a couple of outdoor shows and I’m going to New Mexico and Arizona in early September. I had to cancel a show in Phoenix because they wouldn’t agree to my safety protocol but it turns out another venue in Phoenix was fine with it. Jason Isbell has really taken a big stand and he’s had to move a lot of big shows. Overall the trend is going to be towards his state of mind. If we are going to have a concert business in the future, it is going to be mask and vax. It will take a little while for people to flip over or else nobody is going to play.