Get Back to the Start: A Conversation With The Wandering Hearts 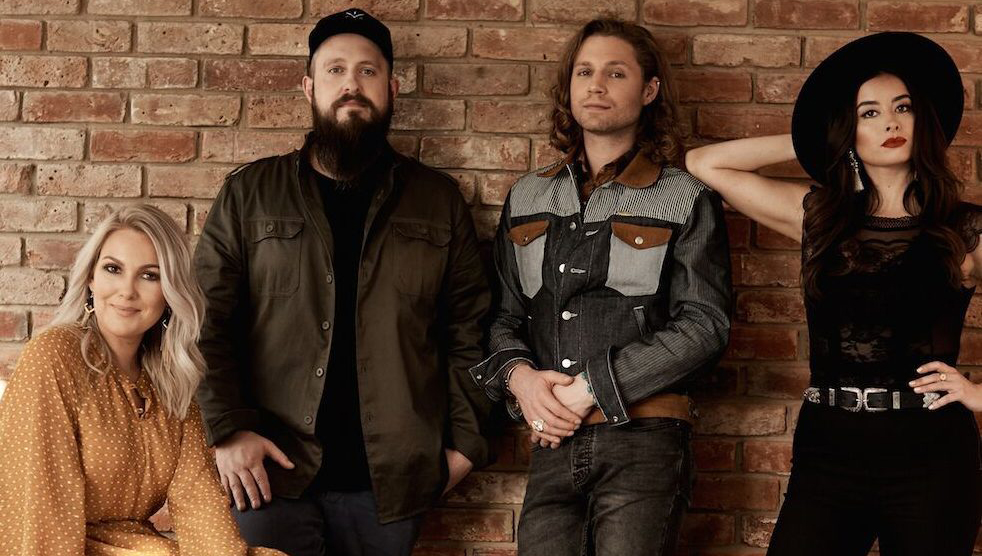 With exceptional harmonies and a talent for tapping into complex emotions, The Wandering Hearts are breaking – in a good way. Earlier this month, the UK band sang at the Grand Ole Opry and Ryman Auditorium in Nashville and at Graceland in Memphis, courtesy of one of their biggest champions, Marty Stuart. And this summer the band will appear at a number of high-profile festivals in the UK, including Black Deer and The Long Road Festival.

All this activity follows the February 2018 release of their dynamic debut album, Wild Silence. On a Friday morning in Nashville, all four members – Tara (Tara Wilcox), Chess (Francesca Whiffin), AJ (Alexander John Dean-Revington) and Tim (Timothy Prottey-Jones) – nestled on a couch to introduce their compelling music to listeners on both sides of the Atlantic. They’re already eager to return to Nashville for an official showcase at Americanafest in September.

I wanted to talk about “Wish I Could” first, because of the line that says, “I know I messed up at the finish / I need to get back to the start.” I think that’s a universal feeling. What were you hoping to capture when you wrote that song?

AJ: I guess it really, any kind of situation that everyone has probably found themselves in where you’ve gone as far as you can possibly go with something. And with hindsight, you can look back and go, “There are a million ways that I could have done this differently. Perhaps if I had done it differently the outcome would have been better for everyone.” But inevitably, whatever mistakes or decisions have been made, it got to a point where you just can’t do anything about it. It’s begun that downward spiral and you can’t get back out of it again.

Tara: When we wrote that, it was one of the first songs we wrote as a band. We didn’t know each other very well. And through songwriting, it’s not only cathartic, but it’s a really great way of getting to know one another. And sadly, breakups are a universal thing and a big learning curve. So really it was something that all of us could go, “Oh, I recognize lying in bed with somebody and having a life with them but feeling like I’m on another side of the world to them.” All that imagery and stuff was universal for the four of us and consequently, probably for everyone else.

You didn’t know each other that well when all this started happening. So suddenly you’re opening up yourself in songwriting pretty quickly. What was that experience like?

Chess: I think it’s quite scary because sometimes the deepest, darkest thoughts that you have about things, or when you experience things, you don’t always talk about. And when it comes to songwriting, that’s the stuff that you want to write about. So you don’t really have an option to keep that and go, “Oh, I’m probably not going to say anything about that,” because actually that could be gold to a song. I think across the board, we always write from a place of truth and it doesn’t feel right when we don’t.

AJ: You’re always going to have, with writing, that slight reservation or fear of judgment in a way, particularly when we didn’t really know each other very well. Because you don’t know how people are going to react, especially when you’re like open and baring all that heart and soul and going, “Hey, this happened to me,” or, “I did this,” or, “I feel this way about something.” You never know if that’s going to be the nail in the coffin. Everyone goes, “Well, you’re an idiot. Your experiences are rubbish!” I think creative people probably always have a little bit of that anxiety or nerves about that anyways.

Tara: It’s nice because everyone in the band is keeping your stuff safe. I feel it’s a bit like when you go to a therapy session, that what you say in the room, stays in the room. And so actually the stuff that we talk about doesn’t come back and become fodder for conversation at a pub or at a bar.

Tim: It just gets put on an album the world to hear. (all laugh)

I watched a lot your videos and the one for “Devil” was especially interesting. Where did you film it?

Tim: We should probably make you guess, because we think it obviously looks quite American in style. But no, it’s in Kent. It was about, I don’t know, an hour south of London maybe? It was a very unusual place. The last thing you kind of expect to see driving through some fields in Kent is basically this Western town that’s been built called Laredo. It had all working features, it had a little bank. It had, like, a saloon, a funeral home, a pharmacy, a dentist, gun shop, library – and no electricity! Which is difficult when you’re filming a video.

I think the video on the whole was a tiny bit tongue-in-cheek for us, just because we’re obviously not American. I think that’s very clear for anyone that’s seen us live or anyone who knows us. They know that we are very much trying to stick to our British roots. But the roots of our music happen to be probably American, to a certain degree. So it was a little bit tongue-in-cheek, having a massive American flag behind us. It stoked a few fires, I think. We enjoyed that.

Do you like stoking the fire, keeping people guessing?

Tara: I think it’s just funny. Not on purpose, but it’s just funny how it happens. Every time we meet somebody, it’s an opportunity and you don’t know what that’s going to be. But the four of us, we met up and we were just writing some songs and drinking some gin – and we’ve done that with other people before. Or we’ve done it once and it wasn’t a good idea. And with the four of us, it just works. It’s that serendipity.

So then when we started doing music, people would say, “What kind of music do you do?” And it’s just kind of what you hear it as. We’ve got four very different personalities, very different musical influences, and that makes up our sound. So when Tim talks about stoking fires, it’s just interesting because some people will go, “Oh my god, you guys are the best country band!” Someone will go, “Oh my god, they are not a country band!” And some will go, “They’re folk” and “They’re not!” We just end up smiling, and it’s like, “We are what you want to call it.” But essentially, we are the sound that we make when the four of us get together. But it is funny because some people are passionate that we are one thing – and equally passionate that we are not! (all laugh)

Tim: But, I would say not here [in the US]. Everyone has just been so gracious and has enjoyed our music because it’s just music.

Here we just say, “That’s Americana!” Another video I watched was “Burning Bridges.” What was it about that concept that appealed to you?”

AJ: Meji (Alabi, the director) had done some cool stuff before that we had seen. And first of all, we thought it would be cool because it was such a break from the “Devil” video, for example. And the concept of the song itself was one that we found quite difficult to actually tell in the UK because we wrote it the day after the Brexit result had been announced. So we tried to basically write a song to capture the frustration and the feeling of isolation. And in a way, a bit of fear of what’s to come, and not really knowing.

So we wanted to try and find a way of getting that somehow into a music video without it being a plain old performance video. So that’s what was really cool about it, not just using that space for the ballroom, but having the great dancers and having this dialogue between them physically, which was so push and pull and uncertain. It really hit the nail on the head for us.

Tara: I also like the idea that we were all filmed separately, because of that idea of isolation. And then at the end we would all meet together. And the dancers seemed to make friends again at the end. So it’s the whole idea at the beginning of an argument and us being isolated from one another, and then this whole journey and this unity at the end. While we wrote it about that, my dad was like, “Oh my god, I so relate to that. That’s a relationship that is broken down.” And that’s not for us to say, “Well, actually that was us feeling confused about the world.”

AJ: We don’t like to project too much because people will take whatever they want from songs. To somebody else, that song might not be about Brexit at all. It might be like a demolition person literally thinking it’s about burning bridges down. And that’s fine, too.

I don’t think you guys hide behind much, because I was listening to “Nothing Happens When You Die” and I thought, “All right, you’re very candid.” But you hadn’t known each other that long when that song was written.

AJ: No, that was actually really early on, actually.

Tell me a little about the trust that it takes in each other to say, “All right, we’re kind of making a statement with this, but we’re all going on camera and sending it out to the world.”

Tara: I think the thing that’s interesting about that title is that AJ did a really lovely introduction to that the other day. Because it sounds like it’s quite a negative title, but actually what I take from that is… AJ had worked on this wonderful idea and brought it to us. And he was like, “It’s one of hope. So if tomorrow isn’t guaranteed, if there isn’t going to be this option to redo everything…” So rather than making it religious or political or anything else, it’s like, “What if today is all we have?” And if today is all we have, let’s just make it the best that we possibly can. So as someone who didn’t contribute a lot lyrically or musically to that song, I just adore it for the sentiment now.