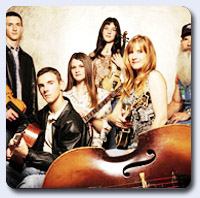 Back in 2008, when I was living in Nashville, I had my first visit to the Grand Ol’ Opry.  I bought a front row seat at the last minute.  The first act of the night was a family bluegrass band called Cherryholmes, fronted by Jere and Sandy Cherryholmes and their four incredibly talented teenagers.  And they brought. the fricken. house down.  Of all the acts I saw that night (or on any subsequent visit to the Opry), no one got the reception that Cherryholmes did.

So I was understandably disappointed when, earlier this week, The Bluegrass Blog announced that after over a decade, the group was disbanding.  At their final performance in Galax, Virginia, Sandy explained to radio show host Tim White:’We talked about all this a while back, and it was a mutual decision. We are a traditional family. I’m a stay-at-home mom; we are home schoolers. We raised our kids to be family people, and we realized along the way that we were going to have a conflict in values within our own family. As our family grows, we can’t make them do something we felt was not right…  [The kids are] excited – they get to go off and be on their own. And were excited – we get to be alone for the first time in years and years’

As sad as I was to hear the news, I totally get their reasoning.  And with four Grammy nods and seven albums under their belts, Cherryholmes had quite a run (especially for a band that began as a ‘family bonding experience’).  Thankfully, we’re still left with great music like this…

(just wait for the sick banjo riff around the 7:00 mark…. whaaaaaat)