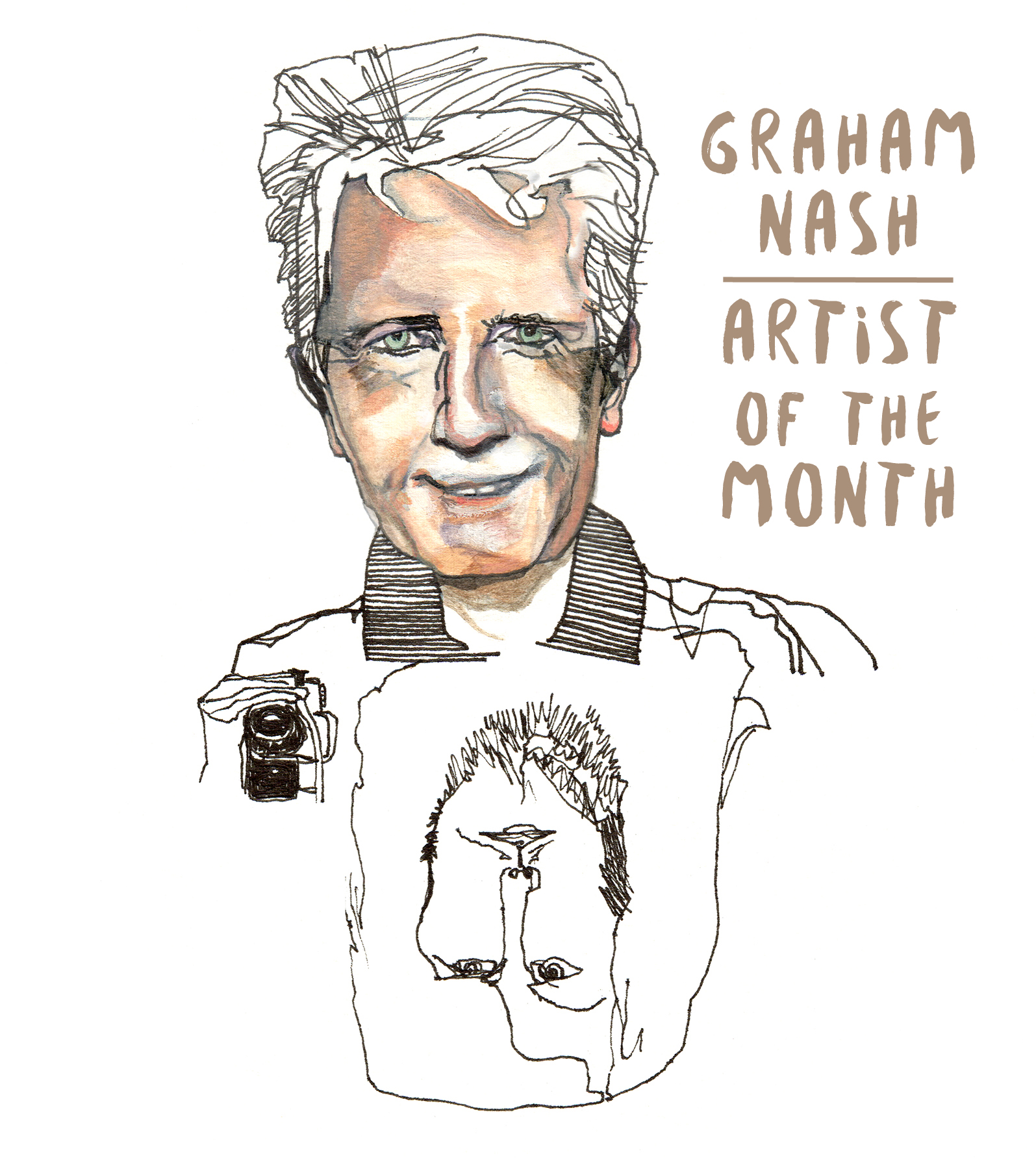 It’s been 14 years since Graham Nash released his last solo album, Songs for Survivors. In the interim, the 74-year-old has experienced rather significant challenges — both personal and professional — all of which have naturally informed his new album, This Path Tonight. Not only are Nash and his wife Susan Sennett divorcing after 38 years of marriage, but the singer/songwriter also called the future of Crosby, Stills, and Nash into question when he admitted to Dutch magazine Lust for Life in early March that David Crosby had treated him “like dirt” and he wouldn’t be participating in any future CSN records or shows.

As harsh as those comments seem given his typically amiable demeanor, they might have as much to do with the creative place he’s in as a solo artist. The tough experiences he’s faced have let loose a veritable musical flood. Working with producer/guitarist Shane Fontayne, the pair produced 20 songs over the course of one month, 10 of which would eventually comprise This Path Tonight. And Nash doesn’t appear to be slowing down anytime soon. “I’m still writing with Shane,” he says. “We were writing last night, as a matter of fact.”

It seems the prolific songwriter has once again found his creative sweet spot and, while the circumstances instigating that output are less than ideal, they’ve sparked an album of brooding intensity. “Everything is going according to plan, but it’s an emotional rollercoaster, and This Path Tonight is my emotional journal through my life, at this moment,” Nash admits in a forthright tone.

If it seems like This Path Tonight would be a woebegone album thanks to the themes of loss, heartache, and nostalgia which arise in certain songs, think again. Hand a songwriter as talented as Nash difficult moments, and he deftly transforms them into rich introspections offering messages of hope. “If there’s any message in This Path Tonight, it’s that you have a future. Figure out what you think will make you the most happy, and go grab it and run,” Nash says, his voice taking on an optimistic note as he discusses his latest work.

Both melodically and thematically, This Path Tonight reveals Nash at his contemplative best, oscillating between the melancholy nature of questioning one’s place and path in life, and the hope that can be attained from finding answers … or at least enjoying the search. Unlike Songs for Survivors — which felt like a stiff, overly structured album — This Path Tonight contains a lush quality all the more intriguing for its simple, straightforward arrangements and production. “I’m really proud of this record,” Nash admits. “I think it’s a good piece of work.”

Nash has struck on the magic that makes him such a legendary songwriter. On “Fire Down Below,“ the song’s bluesy feel — found largely in gritty guitar riffs and rhythmic piano underpinnings — contrasts Nash’s airier vocals, but all work together to build into a chorus that feels plucked from the 1970s. It’s as catchy as it is meaningful, a hard combination to hit upon.

While having to venture down that path of self-discovery at 74 could, understandably, feel like a burden considering such soul-searching tends to fall within a more youthful domain, Nash’s natural curiosity about practically everything helped guide his way. Beyond his songwriting, he pursues artistic expression in myriad forms, including photography, painting, and drawing. “I’m a curious man,” he admits, recounting a time he received a blast from his past while doing a book signing for his autobiography, Wild Tales: A Rock & Roll Life. “A kid came up to me, and he gave me an 8×10 manila envelope. He said, ‘You need this.’ In this envelope is my report card from when I was 11, and the first thing that a teacher said on my report card was, ‘This boy wants to know everything.’ And I guess I haven’t changed,” Nash chuckles.

That kind of curiosity allows him to communicate back from the trenches, so to speak. “I’ve already realized that it’s the duty of every musician and every artist to reflect the times that they live in, and that’s exactly what I’m doing here,” says Nash. “These songs are what’s happening in my life right now, and probably to a lot of people out there happening to their lives at the same time.” It’s a gift he’s been offering listeners ever since he put pen to paper to melody and formed English pop-rock band the Hollies in the 1960s.

Nash displays a penchant for writing particularly instructive songs. He’s long been attuned to the political issues and social injustices that continue to affect the world. Explaining a new song he’s working on with Fontayne, he says, “I saw a terrible photograph that somebody sent me last night that was taken in the 1940s, and it was of four beautiful children sitting on a stoop outside their shack next to a sign that said ‘Four Children for Sale.’ In the 1940s, there were people that were so poor they had to sell their children. Don’t think that didn’t start me thinking, so Shane and I started to write a song.”

Two of the songs on This Path Tonight’s deluxe edition continue a similar political work even while the rest of the album concentrates on more personal fare. Nash wrote “Mississippi Burning” about three college students murdered in the 1960s when they tried to help black people vote, while “Watch Out for the Wind” deals with the morning Michael Brown was shot and killed in Ferguson, Missouri.

Still, he takes issue with the fact these situations keep surfacing with no clear resolution in sight. “It’s one of the saddest things about being a songwriter,” he candidly says. “Yes, I’m loving the fact that people still love to hear ‘Military Madness’, but holy shit, what a drag to keep singing it. I wrote that 45 years ago about my father going off to WWII.”

He continues, “The world is so crazy. It is so nuts out there. I mean, just look at the political landscape, for instance: It’s a clown car. It’s insane. And that’s just the politics, not the wars, and Syria and Yemen and Afghanistan and Iraq. The world is crazy. We have to hope it will get better.”

Music offers one such balm, and it’s a point he examines in one of his new songs, “Golden Days.” Nash plays upon the song’s title, a phrase that arises and shifts with each verse, beginning as “olden days” before transitioning to “golden days,” “broken days,” and finally back to “golden days.” With each utterance, memory alters the way one looks at the past. Set against a solemn melody plucked on guitar, the song’s central theme concerning time’s passage gives way to what music offers life through all its ups and downs. Nash sings at the song’s close, “Songs with soul and words with so much hope for a brighter day.”

The hope that informs his music plays a large role in his own personal outlook. “My basic understanding is that life truly is simple. Take care of the area around you, take care of the litter around you, encourage your child, smell a flower, do something every single day that makes you smile and you will live longer. Well, I’m 74 now, so it’s stood me in good stead,” he says.

That would be prosaic advice coming from someone who wasn’t aware of the world’s greater injustices and dilemmas, but from Nash, it’s a sage attitude steeped in understanding.

As music journalist turned cultural critic Ellen Willis wrote in a 1967 essay about Bob Dylan, “In a communications crisis, the true prophets are the translators.” The same could be said of Nash. At the heart of it all, he remains a translator, one who skillfully expresses those personal crises threatening to undermine even the strongest individual in order to offer listeners an inspiring perspective instead.