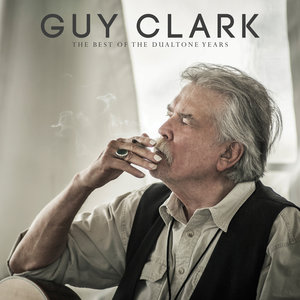 This year, by so many accounts, was a terrible year. From the complete atrocities in Aleppo, to the never-ending police brutalities, to the election of Donald Trump, it's often felt like one disaster after another with no sign of stopping soon. In times of trouble, it's always helped to look to our idols for guidance — particularly in music, for me, at least — which is another way that 2016 was just so damn awful: So many of those very people passed away. Prince. David Bowie. Merle Haggard. Leonard Cohen. Phife Dawg. When the world starts to slide into the ocean like a sand castle that seemed so safe from its waves, these legends always present a certain sense of consistent solace and, once they started to disappear, it seemed like nothing, and no one, was safe.

It's impossible and irresponsible to rank the value of any one departed soul over another, but one of the losses I grieved the hardest was Guy Clark, who died in May. I was quite pregnant at the time with my second baby, and the onslaught of hormones left me staring at the computer screen in shock, tears joining with remnants of last night's mascara and forming trail-maps down my cheeks. Clark's words had always served not only as the basis of his beautiful music, but as something aspirational — even a journalist can take a lesson from the way his lyrics evoke a scene, the way he picked up on the smallest detail or nuance of human emotion. Should he have wanted to, he would have made a world-class reporter.

The last time I saw Clark, in the basement of his home for an interview, I was actually pregnant with my first child. I'd asked him before leaving if he had any advice to me as a new parent — if he knew how I could assure he'd grow up as curious about the world and the art it contains as he was. He said, simply, "Read him Dylan Thomas and play him Woody Guthrie." I took the advice to heart. A few years later, when my daughter was born three months after Clark's death, we named her Dylan. It just seemed a fitting thing to do, and a permanent reminder.

The amazing gift of such prolific minds as Clark's is that, even once they pass, there is often more music hiding in tapes and basements and hard drives, and such is the case with Guy Clark: The Best of the Dualtone Years, out in March. While most of the collection focuses on his work from the last decade of his life that had already made its way onto other records, there are a few unreleased treasures, too. One such song is "Just to Watch Maria Dance," written with Lady Goodman (aka Holly Gleason), included in a demo version. Clark was never one for artifice or studio polish, so his demos sound quite similar to anything mastered up — here, his vocals perhaps just a touch more ragged and the plucking perhaps a little more stiff, like a pair of his signature denim jeans just a hair short of worn-in.

"Empty threats and no regrets, it's time for moving on," he sings. The words are new, but the voice as familiar as ever, even though Clark has now moved on for good. This may have been a terrible year, but little treasures like this add glitter to the darkness, and true gifts, like a daughter who will never forget to read Dylan Thomas, make it still worth living.