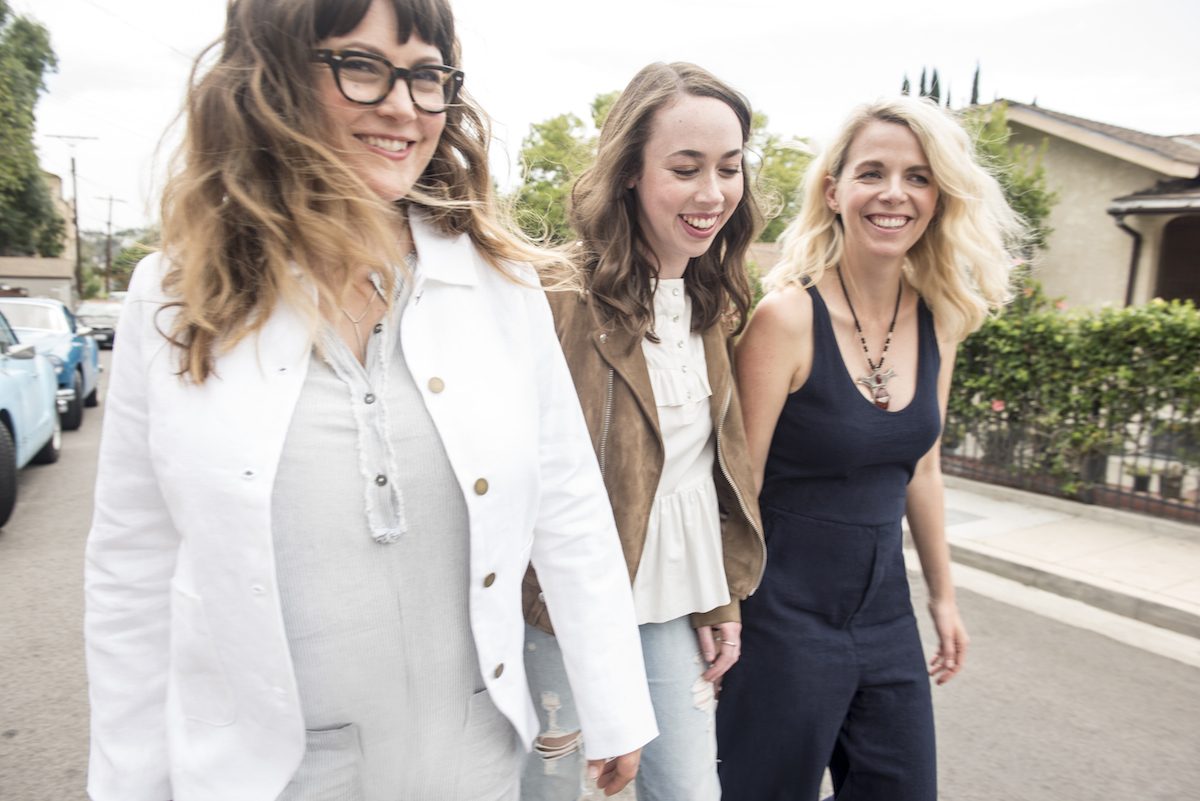 With me today in the Writers’ Rooms at the Hutton … I’m With Her — Sara Watkins, Aoife O’Donovan, and Sarah Jarosz. So great to have you guys here. New record, See You Around, just out a few weeks ago. How fun is this? How much fun are you guys having?

Aoife O’Donovan: We’re having so much fun! It’s a beautiful day here in Nashville, and it’s great to be playing music.

I saw your show last night at the Station Inn. There’s something absolutely magical about the three of you. And, during the show, I kept trying to think, who else would’ve worked within this sort of a thing? And I kept coming up empty. I couldn’t think of someone who had both the instrumental prowess, and the vocal ability, and just the shine that you three have together. What is it? What’s the X factor?

Sara Watkins: I really like that there are three of us, too. Three is a nice number for a band. I feel like it makes the writing and arranging process a little more efficient. It’s easier to go toward each other and find a common goal with the three of us. Where, with a four- or five-piece, that can sometimes make things a little bit … it just changes it. It’s really nice having a tight three-piece.

It was almost accidental how the three of you came together. Was the magic there from the very first time you sang together?

Sarah Jarosz: Yeah, I would say so. It definitely felt a little bit like a spark. We did a workshop, sort a singer/songwriter workshop at the Telluride Bluegrass Festival with some other great musicians, as well — Tift Merritt, Nicki Bluhm. They’re so great, we love them. Because of everyone’s crazy schedules at the festival, it just so happened that the three of us were able to get together before to have a little something prepared for the workshop.

I remember sitting backstage in a tent behind the main stage at Telluride, we worked up a couple songs. I remember one of them was Aoife’s song “Magpie,” which is not the easiest song in the world, and I just remember thinking how seamlessly we all fell into it. That was kind of the first moment where I remember thinking, “this is really cool.” And then, later on that night, putting together a little 20-30 minute set was also pretty seamless. And I think, something that we’ve talked about before is that, we have a shared love of similar music, kind of a shared well that we’re pulling songs from, and so it was kind of easy to put a little set together.

I’m so fascinated by the vocal interplay and how you choose who takes lead, and who comes in on this part, and then who sneaks in under here, etc. What’s the process of working all of that out? Just a bunch of trial and error or following your hearts?

SW: It can happen, sometimes, where it’s just an idea, “Oh, maybe you should sing this part!” But a lot of times, the harmony arrangements and the instrumental arrangements happen during the process of writing. We’ll definitely tweak things after the song’s written, but it’s pretty much in there in the composition, a lot of it. And sometimes it’s just as simple as, one voice is drawn to this part, and then we switch. I don’t know. It’s never something we argue about.

SW: And we like that we can switch around a lot and try to mix different textures — like if Jarosz is on top versus either of us, if we can mix it up and change the blend at different times, try to make it effective.

AO: And using a lot of duo and unison singing and not always having to rely on a three-part harmony blend separates song from song and arrangement from arrangement to really play around with the different combinations we have available to us.

It makes the live show, in particular, that much more captivating. It’s this constant flow, but it was just so seamless, as well. Like, “Oh, we’re switching here. We’re doing this.” It was just choreographed so beautifully.

Two things really struck me last night, watching you guys play. One was the people in the crowd. There were Milk Carton Kids there, Béla and Abby were there, Ron Pope was there, Caitlin Canty got name-checked from the stage because she knows about being stuck on hills in Vermont. [Laughs] The level of admiration and adoration from your peers is really off the charts. That’s cool, right? That must feel really good.

SW: Yeah, I don’t know how much of it is adoration …

SW: We all really enjoy the fact that we have a ton of friends who we love. We love their musicianship, and we’re really good friends. And we’re in this scene together, and we’ve known these people for so long. It’s really special that Béla and Abby were there, because I remember being at Telluride Bluegrass Festival trying to sneak backstage when the Flecktones were playing, when I was 12 years old, and I was just desperately trying to sneak past the guards or, I don’t know, make them think I was cute and let me in or something. Did not work. Go figure. So that’s a scene that I think about a lot when I see Béla, because we’ve all looked up to him — and his scene and his generation — our entire lives, and it’s pretty cool to get to be in a place where he is supportive of us. That whole thing — the way that each generation welcomes the next in this culture — I think is really, really special. It’s a very warm place, where we are now.

And the other thing — nice segue Watkins — the second thing that really struck me was the joy that was so obvious between the three of you. Watching Aoife’s face while she was watching either of you solo, it was everything! [Laughs] It was such a beautiful part of it, and I think that’s the X factor — the joy. It’s wonderful to see musicians loving what they’re doing like it’s day one.

SW: A huge part of what I love about being a musician is the community of players. That’s an enormous piece of what I love about this life as a musician. The fact that I get to work closely with great musicians who are really good friends of mine and then coming together at festivals and catching up. When you’re a kid growing up, you’re sharing tunes that you’ve learned and new things that you’ve learned, working up songs from your favorite people’s records. And, over the years, sharing that life and sharing that rhythm, and now being at a place where the family of musicians has grown and grown. It’s a really fun thing.