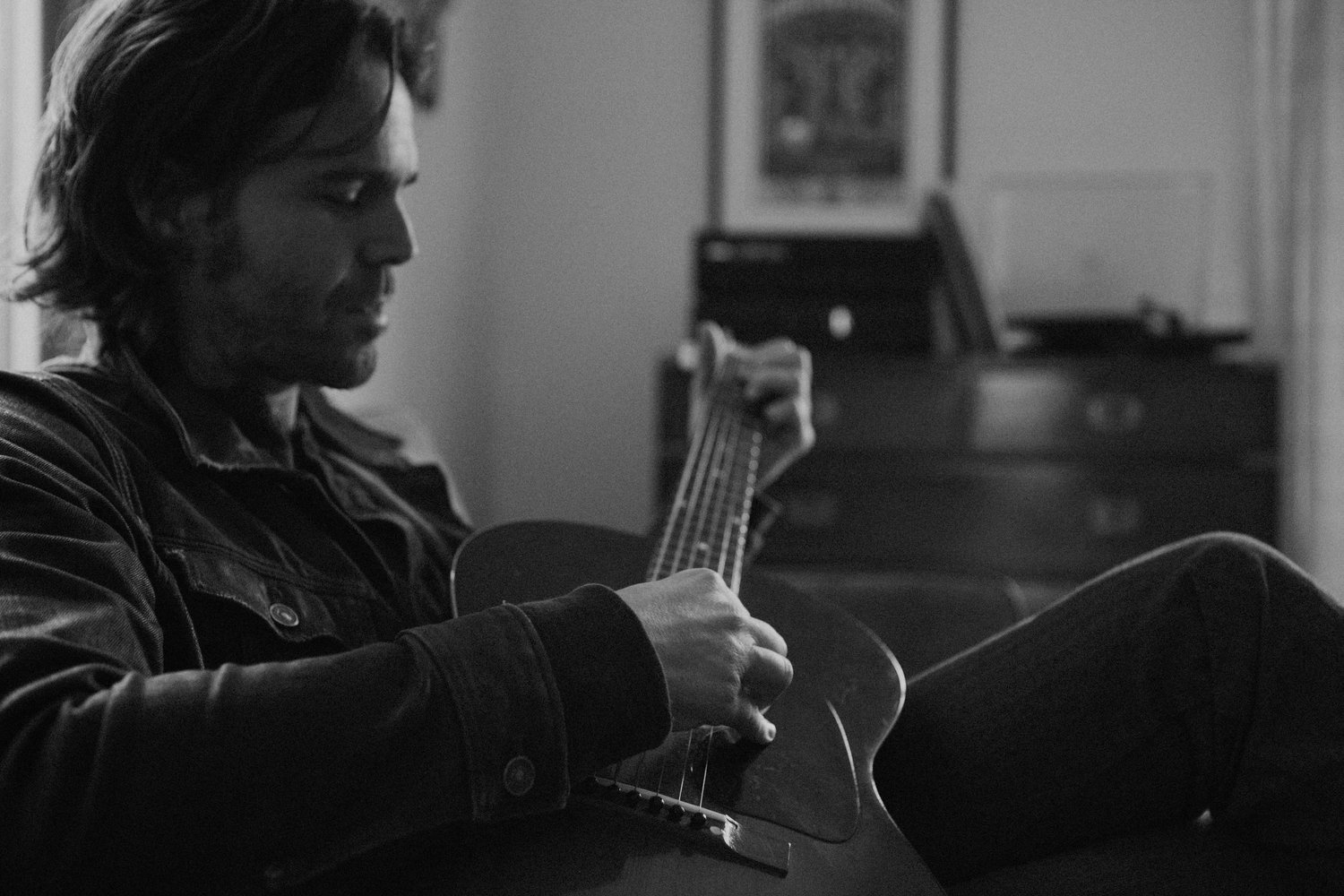 Hey everybody! Welcome to Hangin’ & Sangin! I’m Kelly McCartney from the Bluegrass Situation. With me today at Hillbilly Central, Peter Bradley Adams over there in the middle, flanked by Caitlin Canty and Evan Galante as support folks and court jesters, in the case of one Caitlin Canty!

We were dishin’ a little bit before we went live. We’ll get to that later.

Yeah, heckler. So Peter, latest record, A Face Like Mine, came out April?

I got that right. Didn’t even write it down!

PBA: It seems so old!

Well, it took us like six months to get you pinned to come on here. We’ve been trying!

Okay, as long as the people know.

PBA: But I’m glad to be here, and I’m glad these people came with me.

I said this to Andrew Combs, when I had him on, but it fits you. As a singer, to me, and this is, again, part of why I feel drawn to your stuff in certain moods. But you’re like a drummer who just sort of hangs back in the pocket a little — like you’re not pushing the beat, you’re just right on the back end. And what you’ve done by creating the soundscape that you have, it’s like you’ve created this musical world that supports that so well.

That’s an observation more than a question.

PBA: I mean, for me, it feels like I’m just kind of hiding and trying not to mess anything up. [Laughs] It’s all fear! But I understand what you’re saying. It does kind of sit in there, but I’m growing weary of just sitting in there so nicely.

PBA: So I’m trying. I’m not there yet, but eventually, I’ve gotta get out of that little soft pocket.

PBA: Yeah, I’ve been leaning in a little bit.

How do you feel like you’re gonna [push for it]? What’s next? You have the physical voice — what you’re born with — so how do you take that further? You’re not a crooner.

PBA: Yeah, I don’t know. For me, it’s just about … to sort of find the sound which is [natural]. I mean, I can’t have a different voice, so just trying to find that sound. And also don’t spend so much time styling it, trying to make it sound nice. Which then you immediately lose the way you sound. I mean, it still can be effective for some people and the intention can be there, but I guess that’s kind of what I’ve been thinking about a lot — just how to strip off all the affectation, and I definitely haven’t figured it out yet.

CC: You do know! I’ve written a lot of songs with Peter, and he’s like our construction man! Like, you’ve said this term, “the way the words feel in your mouth,” the way they come with the vowel sounds. You’re really good at the bricks of building a song, the foundation is really strong.

CC: I’m like a mosaic maker, like “Ooh, that’s pretty!” And I try to cobble all the other stuff together and figure out how it fits. But you always have the good, solid [foundation] of everything.

PBA: It could be that I’m just being overly controlling, like “Oh, no, you need to hold that out just a little longer then do that little turn at the end there.” Because, to me, that’s important …

PBA: But then I’m like possibly squeezing the life out of it, you know? By telling you, I mean, she’s had a lot of experience with me asking her to phrase stuff differently. [Laughs]

CC: Well, that’s when I’m singing to your stuff, but when we’re writing, it’s like figuring out the words. And I think you sing based on what word sounds best in the rhythm. So it’s like you’re just reacting naturally to it, sort of. That’s how you’ve talked about it before. Just inserting myself!

Because your songs are sort of ridiculously rich with that sort of, to me at least, what I hear in them, is that sort of spiritual seeking and self-examination and that stuff. And I know not all of it is based in your day-to-day reality. I mean, it’s storytelling, but you’re still in them, you’re still putting yourself out into the world to be under a microscope.

How does that feel? Do you have any qualms about that, or is there just no choice — you kind of have to?

PBA: Yeah, I kind of have to. I mean, I have some regrets about some stuff I’ve put out, you know, a little “ugh,” a little cringey. [Laughs] Not much, I mean everyone does.

Because of the writing or because of what you revealed?

PBA: I think, maybe both. [Laughs] How it was performed or sung, but I’ve let that stuff go. Yeah, I don’t [have a choice] and I don’t set out to write a song about something — ever. It just kind of happens. You sort of start and these words start coming kind of unconsciously, and then, when you figure out where it’s going, then for me, it’s this very conscious, tedious effort to really hone it in. And that’s the harder work part, the less kind of flowy part. But yeah, then there is some sort of running theme, I think, onto a lot of the stuff.

Do you feel like you can express your fill-in-the-blank emotion better through music or through words?

PBA: Well, that’s a good question. I mean, since I’ve just gotten back into writing some instrumental music, it’s been really liberating in a way.

Yeah, because melodies can express things that words never can touch.

PBA: Yeah, absolutely. And I think that a lot of my lyrics work well and they resonate really well with the melody, but you wouldn’t want to sit there and read them as a poem. [Laughs] It’s not something that I would ask anyone to do … I don’t think songs have to achieve that. I think that they’re sung for a reason.