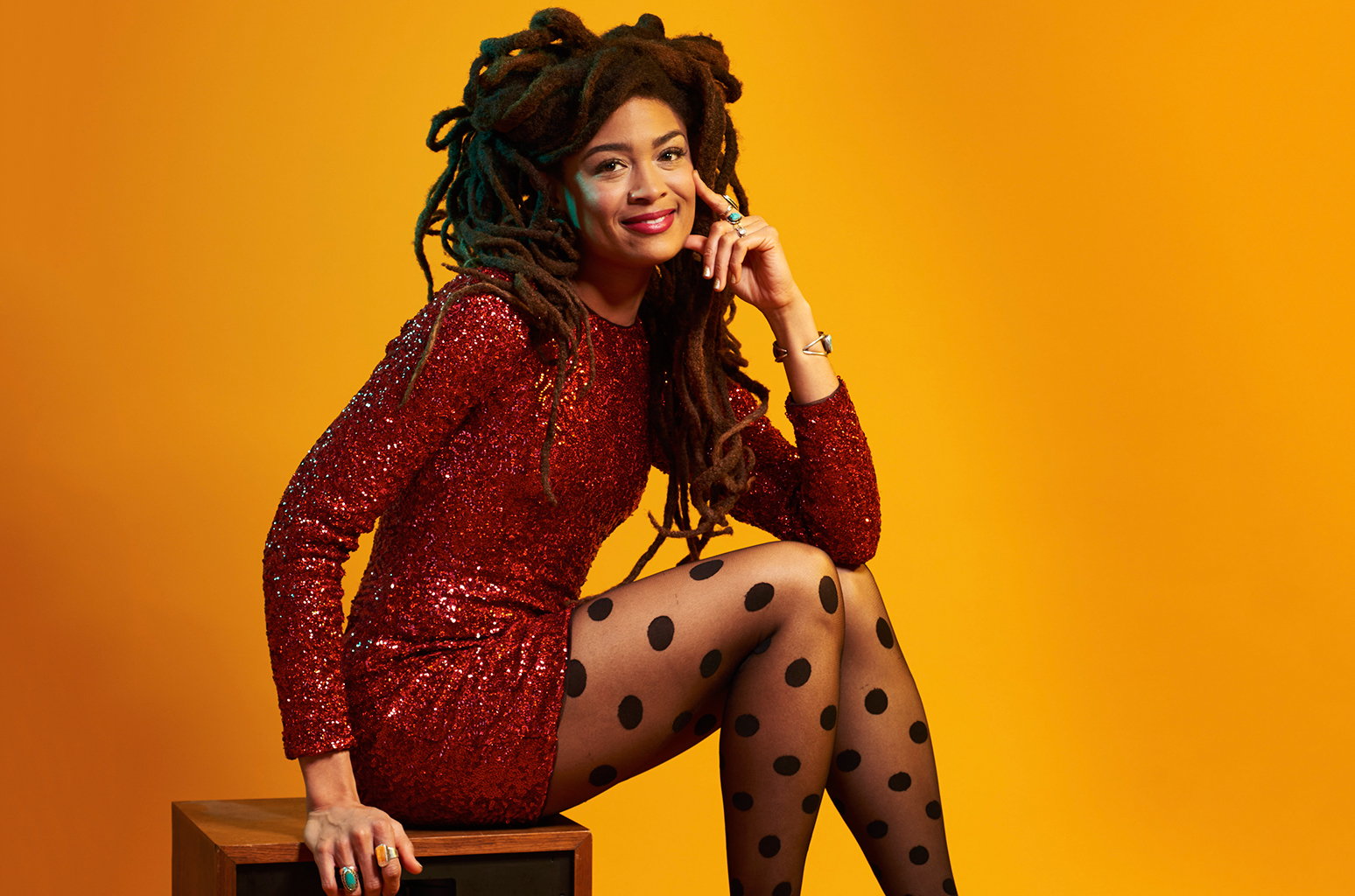 With me today in the Writers’ Rooms at the Hutton … Valerie June. I’m so happy you’re here!

It has taken me so long to get you here, and here we are!

Finally! I’m glad to be here. I’m glad to be in Tennessee. I got in the car last night — I rent a car when I come to Nashville to get around, and I don’t drive very much — so I got in there, rolled down the windows, and I was like, “Tennessee air! Yes!” It’s so fresh!

It’s got that old home smell.

It does. It really does! It was an emotional moment. Every moment’s almost emotional with me, though. [Laughs]

[Laughs] I’ve always been visited by them, so yeah! And following rainbows, ever since that show Reading Rainbow! [Laughs]

Were you super precocious and just in another world? Was that your childhood?

Yes! That makes everything else come into focus for me, in regard to you. I feel like your music, actually a lot of Black roots music, is dancing on this line between the mystical and the mundane, with feet on the ground but hands toward the heavens, right — almost necessarily?

I think it can, generally, a lot of it. But it feels to me like, in America, a lot of American Black music is based out of spirituality and the church anyway. Black roots music is the root of music of all genres, in a lot of ways. I think about somebody like Sister Rosetta Tharpe and how she is the rock ‘n’ roll godmother, but she started in the church! So it’s really interesting. Everybody I love — of course, Aretha Franklin started there — so many people started there. It’s an interesting thing to think about. I used to think about it a lot. Now I’m on the other side where I am hanging out with the faeries a little bit more. [Laughs]

The banjo, to me, is almost the physical representation of that line, as well, because it’s earthy and yet it can sound otherworldly.

Yeah, it can. It really can. It’s a dreamy instrument to me.

Does it take you to other places? Do you get in a little bit of a trance with it sometimes?

I get in a trance. I would say that the biggest places it takes me are places kindred with, I don’t know, I feel so connected to African roots, when I listen to people like Fela Kuti or Ali Farka Touré. The same kind of twanginess that can happen with a banjo, that translation is so easy for me to think that this came from that, and that came from this, and how they’re all married and dancing in the same pot.

I read an interview with you in which you listed a bunch of heroes, musical and otherwise, everyone from Dolly Parton and Joanna Newsom to Kahlil Gibran and Wendell Berry and Frida Kahlo. I love that wide spectrum. We share a lot of the same inspirations. Do you feel like it’s important to pull from a pool that’s both wide and deep when it comes to inspiration and information?

I think the most important thing that I feel is that each individual must do everything, every day to go further into learning who they are. If that means to pull from many things, do that. But for some people, theirs is a very concentrated effort, and it is mastering one thing. I think that’s to be respected, as well as people who are ADD with their attention, of art, and music, and food, and everything! I’m a little bit like that. But there are others where you can just know that they’re just focused, like needlepoint, such a sharp focus on one craft, and how beautiful that is. So I think it’s always an individual diving deeper and deeper within themselves.

I think things that we see in the physical world, they first manifest in an invisible world. So that world is kind of more important in a lot of ways, and it takes time for things that are happening in the invisible world to form into the physical. So, that is an order of time. But if you have this magical place and it’s telling you to constantly focus on just being the best purist of folk music, do that! If it’s telling you you’re drawn to this and that, do that!

Whatever your own compass is, you must constantly be listening to that and constantly saying, “Okay, where is it today?” … Every soul that’s born has a purpose, and every soul has a responsibility to listen to only one voice — that inner voice inside of them — and be constantly checking it and listening to it. Because, when you look out at the world, from the moment you wake up and open your eyes, it’s gonna tell you something else. As a baby, when you’re really little, you know why you came. But then as you get older, things start to shape in different ways. You get pushed and pulled, and pushed down.

The diligence is exhausting, for sure. Yet, I’m with you: There’s no other way to be, I don’t think. I think about representation a lot, representation in the world, and for a lot of us, our images aren’t reflected back to us in the media or whatever. I interviewed Rhiannon Giddens a few months ago, and one of the ideas I posited was that white men, in particular, have a luxury of mediocrity, because the world is built for them. The world reflects their image back to them in all sorts of positive ways, that people like you and I don’t have. So they don’t have to try as hard. So I wonder if that plays a part for some people not even knowing that they have their voice or their light. They just assume the world is there for them and they don’t have to try.

Well, when you’re working in the invisible realm, which is where things occur first, and that’s your most powerful place, and you are truly working there, then everything that you see in the physical [realm] is an illusion. What I’m telling you is that, everything you said is true and it does exist. But where do you get the food to wake up in that kind of world and still shine? That is where practice comes in, and it goes into moving the real world, which is not something you can see — it’s something you’ve got to trust. And every day believing with full force that that flower that you see there, is gonna manifest here, and that there will be beauty and balance. I don’t necessarily think the goal is changing the world that’s out there. But once you start to change you, then things around you start shifting, and slowly it changes.

Like the Grateful Dead song — “ripple in still water.” I love that! I love it! And [the change] is so slow.

Yesterday I was at LaGuardia Airport, and the magazine covers right there, I was like, “Oh, let me look at the clothes on the magazine covers,” because I love clothes. It was beautiful. There were white women. There were Black women. There were Indian women. I was like, “I’m gonna take the change.” I’m gonna take the change where I can get it. Where I can get it and when I see it, I’m gonna honor that and give some light to that, and say, “Yes, thank you.” That’s what I want to see — multi-races, multi-ages, multi-sizes, that’s what I want to see. What do you want to see? It is really practicing the change you wish to see versus continuing to say, “Oh, it’s the white man’s world and this is the way it is.” No! We’re moving forward. We’re creating something beautiful.