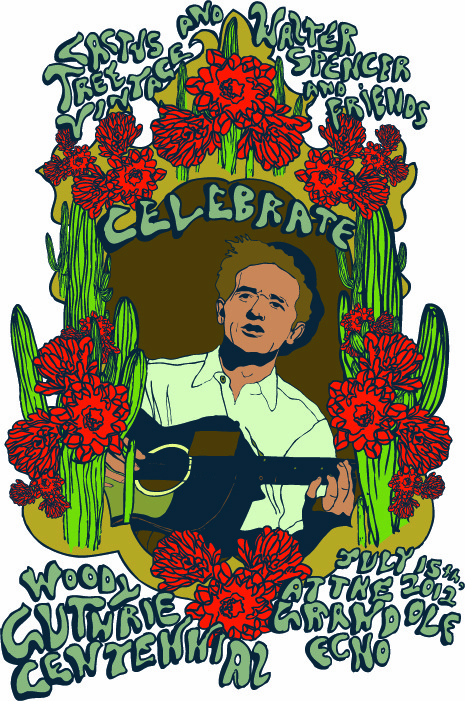 ‘This song is Copyrighted in U.S., under Seal of Copyright #154085, for a period of 28 years, and anybody caught singin’ it without our permission, will be mighty good friends of ours, cause we don’t give a dern. Publish it. Write it. Sing it. Swing to it. Yodel it. We wrote it, that’s all we wanted to do.’

(Written by Guthrie in the late 1930s on a songbook distributed to listeners of his L.A. radio show ‘Woody and Lefty Lou’)

Today marks the 100th birthday of Woody Guthrie – a man to whom the folk/Americana community owes a great debt. Guthrie’s songs represented those who could not be heard otherwise, and gave voice to citizens who were not content with the status quo.  His legacy lies in lyrics which transcend time itself and are just as relevant today as they were when they were penned.

Southern California was a special place for Woody, having lived in Echo Park from 1939-1941, just east of Dodger Stadium and Elysian Park.  It seems only fitting that Los Angeles celebrates one of its favorite residents with one hell of a party. Events are scheduled throughout the city to mark Guthrie’s centennial, including tomorrow’s celebration at the Grand Ole Echo (behind the Echoplex).

We’ll leave you today with a video of our good friends The Farewell Drifters covering one of Guthrie’s classics — ‘California Stars’.  The Nashville-based Drifters will return to LA for their second appearance next week, July 27 at McCabes Guitar Shop.  Tickets are available here: http://www.mccabes.com/condata.html

So thank you, Woody. You’ve inspired countless generations and even after a hundred years, your guitar still kills Fascists.