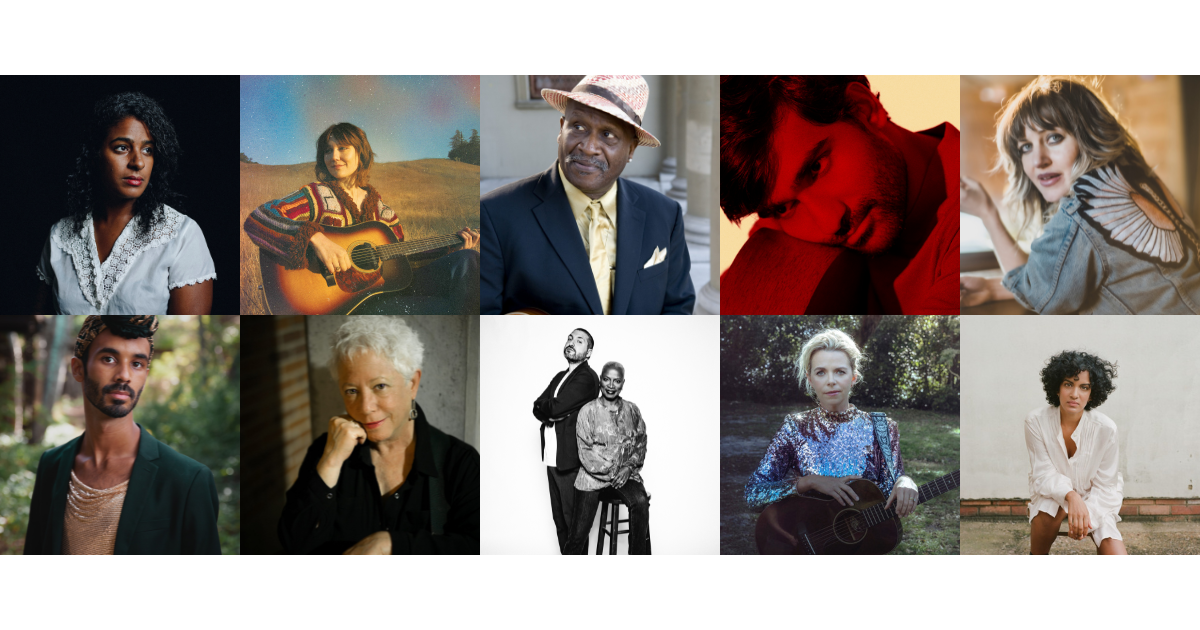 Folk Alliance International (FAI), the foremost global nonprofit for folk music and the producers of the International Folk Music Awards, have announced the recipients of numerous honorary awards as well as nominees for Album, Artist and Song of the Year.

The Elaine Weissman Lifetime Achievement Awards are presented each year to honor the cultural impact of legendary folk music figures: one Living, one Legacy, and one Business/Academic. This year’s honorees are lauded songwriter and performer Janis Ian; the late folk and blues singer Josh White; and Oh Boy Records, the independent record label co-founded by John Prine in 1981.

ALBUM OF THE YEAR (sponsored by Rounder Records)

Get on Board: The Songs of Sonny Terry and Brownie McGhee by Taj Mahal & Ry Cooder
Marchita by Silvana Estrada
Queen of Sheba by Angélique Kidjo & Ibrahim Maalouf
Anaïs Mitchell by Anaïs Mitchell
Crooked Tree by Molly Tuttle & Golden Highway

ARTIST OF THE YEAR

SONG OF THE YEAR

The People’s Voice Award is presented to an individual who unabashedly embraces social and political commentary in their creative work and public careers. As an artist, Leyla McCalla has always traveled through time and space, opening the channels between lost or hidden touchstones of roots music and the present day. As a member of the Carolina Chocolate Drops and Our Native Daughters and in her solo work, the multi-instrumentalist and composer brings immediacy to long lost stories and shows how they survive and adapt through the flexible agents of rhythm, language, and intimate human connection. Her work is political and warmly welcoming, cerebral, and highly danceable. Based in New Orleans after growing up in a Haitian family in New York, McCalla makes music that adds detail to music’s maps and gives voice to people whose struggles and triumphs define its diasporic evolution. In 2022 she released the album Breaking the Thermometer, the culmination of her most complex project yet — a multimedia performance telling the story of the first independent radio station in Haiti. Breaking the Thermometer made Best of 2022 lists at NPR Music, PopMatters, and Mojo, in addition to former President Barack Obama’s list of favorite music for 2022.

The Rising Tide Award was launched in 2021 to celebrate a new generation (under 30) artist who inspires others by embodying the values and ideals of the folk community through their creative work, community role, and public voice. Award recipient Alisa Amador points folk music toward its future — a future that’s cosmopolitan, multifaceted, and multilingual; qualities that have in fact been at the community’s heart all along. Amador, who comes from a folk music family, grew up in Boston, Maine, Puerto Rico, and Argentina, and her songs show the influence of all of those places. A native Spanish speaker who’s spent most of her life in the States, Amador moves easefully between the two languages in her songwriting. As a high schooler, she studied jazz, and is known for sometimes scatting during performances. Amador’s ability to blend all of these influences within sharply rendered yet gently flowing songs helped her win NPR Music’s prestigious Tiny Desk Contest and Folk Artist of the Year at the Boston Music Awards.

Shambala Festival will receive the Clearwater Award, presented to a festival that prioritizes environmental stewardship and demonstrates public leadership in sustainable event production. Shambala Festival is a four-day contemporary performing arts festival in Northamptonshire, England. The festival is completely and utterly committed to being sustainable, circular, regenerative, net positive, earth and life respecting, and future thinking. They have reduced the festival’s carbon footprint by over 90%; achieved 100% renewable electricity; became meat, fish, and dairy-milk free; and eradicated single-use plastics. They’ve received many awards for their sustainability work, including the Innovation Award at the 2018 UK Festival Awards, the International A Greener Festival Award, the Outstanding Achievement Award at the Creative Green Awards in 2017, and more. The festival is Creative Green Certified and has committed to measuring and transparently reporting all of their impacts to provide an honest evaluation of their efforts. They work with independent third parties like Julie’s Bicycle to assess their performance and carbon footprint. The Clearwater Award is sponsored by Levitt Foundation.

The Spirit of Folk Awards are presented to honor and celebrate people and organizations actively involved in the promotion and preservation of folk music through their creative work, their community building, and their demonstrated leadership. This year’s recipients are as follows:

Steve Edge has been presenting folk music in Vancouver as a DJ on CiRT since 1985, and concerts and festivals throughout the city since 1986, initially independently, and then as a co-founder of The Rogue Folk Club in 1987 where he continues to present Celtic, folk, and roots music as its artistic director. Steve was an inaugural member of FAI in 1989, is an inductee into the British Columbia Entertainment Hall of Fame, and a recipient of the Unsung Hero award from the Canadian Folk Music Awards.

Amy Reitnouer Jacobs is a founder and the executive director of L.A.-based the Bluegrass Situation, an online music destination and promoter of roots, folk, and Americana music and culture. She joined the board of FAI in 2015 and was instrumental in refining and codifying the recruitment process for board elections as chair of the Nominations Committee. Amy served as board president through the pandemic and supported FAI’s recent strategic plan and executive director transition.

Marcy Marxer is the creator of All Wigged Out, a poignant and witty musical theatre production (and now film) recounting her harrowing triumph over breast cancer. Painfully funny, it is an example of the power of music and humor to inform and heal. Marxer, along with her partner Cathy Fink, is a multi-Grammy Award nominee and recipient, and together they have been recognized with over 60 Washington Area Music Association Awards for their folk, bluegrass, and children’s music recordings.

Adrian Sabogal is an acclaimed musician, producer, and researcher who founded Marimbea, an organization dedicated to the well-being of the Afro-Colombian communities from the country’s South Pacific coast. By arranging music-centered cultural tourism excursions, Marimbea strives to generate alternative sources of income, knowledge exchanges, and support networks for artists in marginalized and remote communities. Adrian’s work has had an impact on the economic development in the region, and the preservation of a vibrant and unique musical tradition.

Pat Mitchell Worley is the President and CEO of the Memphis-based Soulsville Foundation, which oversees the Stax Museum of American Soul Music, Stax Music Academy, and The Soulsville Charter School, all with a mission to perpetuate the soul of Stax Records. She is the longtime co-host of Beale Street Caravan, a syndicated roots radio show broadcast, and she regularly hosts artist Q&As for the Grammy Museum Mississippi and Oxford American. She is a former development director for the Memphis Music Foundation, and a past employee of the Blues Foundation.

The Folk DJ Hall of Fame was established to recognize radio DJs who have made an outstanding contribution to the preservation, promotion, and presentation of folk music, and who have demonstrated and inspired leadership in the broadcast field. Inducted DJs include the following:

Robert Resnik has been the host of All the Traditions, Vermont Public Radio’s folk and world music program, since 1996. Hooked on music since the 1960s, Robert previously spent many years on-air at WRUV at the University of Vermont. All the Traditions is as eclectic as Robert’s musical taste, but is dedicated to promoting music created by people living in the VPR broadcast area, which includes all of Vermont and parts of New Hampshire, New York, and Quebec. Robert also plays more than 25 instruments, and has performed and recorded CDs with a variety of musical combos for kids and adults.

Marilyn Rea Beyer hosted her first concert in junior high as the school band emcee. She got on board The Midnight Special listening to WFMT as a Chicago teenager. She has had careers in education, PR, and high tech. In 1995, Marilyn became on-air host and music director at Boston’s premiere folk station, WUMB-FM, and served on the board of the legendary Club Passim. Returning to Chicago, Marilyn joined WFMT in 2020, hosting The Midnight Special and now Folkstage. The Midnight Special launched in 1953 and maintained legendary status under Rich Warren’s stewardship. She says that judicious risk-taking, nurturing artists, and falling in love with new music make the job fun.

John Platt has hosted the Sunday Supper (formerly Sunday Breakfast) for 25 years at WFUV, New York, and has curated On Your Radar, a monthly showcase for emerging artists at Rockwood Music Hall in New York City for 17 years. He has founded the not-for-profit New Folk Initiative, which has extensive resources for the folk community at newfolk.org. He began his career at WMMR Philadelphia in 1969, programmed WXRT Chicago and WRVR New York, worked at WNEW-FM and WNYC, and produced national radio programs.

Harry B. Soria Jr. was known as a radio personality and walking encyclopedia of Hawaiian music history. The musicologist, award-winning liner notes writer, and record producer was the son of prominent local broadcaster and songwriter Harry B. Soria Sr. Ironically, Harry B.’s interest in Hawaiian music was sparked by hearing “cool” old records far from Hawaiian shores while at college in San Francisco. Upon returning to Hawai’i, he bonded with his dad over his vintage Hawaiian records. Harry B.’s passion for music from this period led to guest spots on KCCN in 1976 and his weekly Territorial Airwaves radio show of recordings from his personal collection. In 2019, Territorial Airwaves became the longest-running Hawaiian music show in radio history. Soria’s record collection and archives are being donated to the Hawaii State Archives.