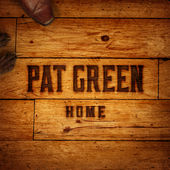 Pat Green is one of those guys who can ride the fine line between commercial country and Americana, the kind of singer who can be a labelmate to the likes of Kenny Chesney and Keith Urban, and friends with guys like Robert Earl Keen and Lyle Lovett.

On this record, he makes the peace with both sides of his musical personality. The opening tune, “Home,” is a marginally clichéd slice of contemporary country about “finding his way back home” (and likely in the company of Thomas Rhett and Luke Bryan). “Break It Back Down” is one of those current events namedroppers that contemporary country programmers love to put on the radio, and “While I Was Away” draws on the “I was looking at you while you slept” theme that’ll get a country girl squirming in her Sheplers.

On the other side of the spectrum, there’s the best song on the record — the wryly sassy duet with Lyle Lovett called “Girl from Texas” — a dirty blues guitar strut called “Bet Yo Mama,” and a solid party song, “May the Good Times Never End” (cut with help from Delbert McClinton and Leroy Parnell). Green’s duet with Sheryl Crow, “Right Now,” gets a little trite at times, but the melody wins the song some high marks.

But as much as we like Green, and we're really happy about the Lovett duet, we’re a bit disappointed in this disjointed showing. It’s a far cry from the fabulously fun and energetic cover album he did with Cory Morrow a few years back and it lacks the emotional oomph of some of his previous showings. So we say Spotify this one up, playlist your faves, and go see him live, where he’s really at his best.