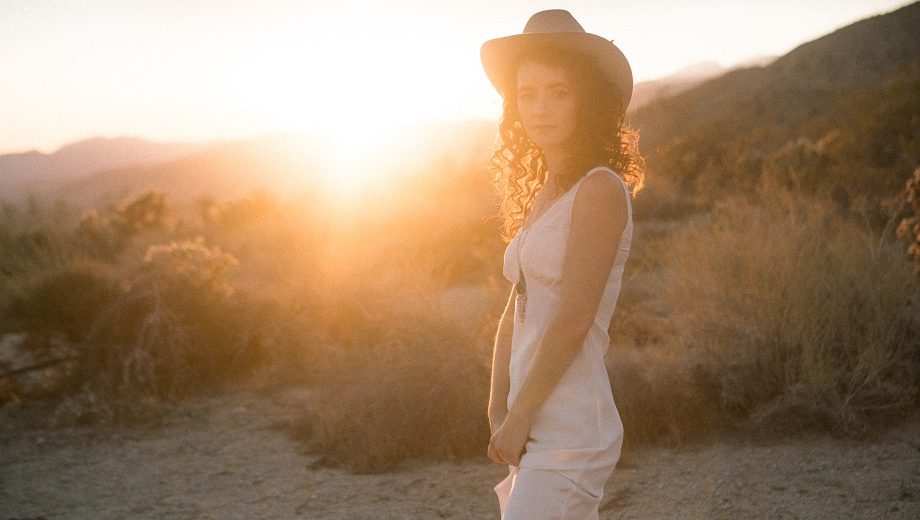 Michaela Anne put a lot on the line to make her new record, Desert Dove. Working for the first time with producers Sam Outlaw and Kelly Winrich, the self-funded album was recorded in San Clemente, California. With many of the songs written either on the West Coast or in the Southwest, the pervasive theme of manifesting her own destiny resounds.

All of the songs pull from a mixture of her own life (potentially even her past lives), characters she’s met in real life, and some of whom she’s envisioned in her imagination. We sat down with Michaela Anne to discuss everything from her inspirations, to her transient childhood as the daughter of a submarine captain, to the anticipation of releasing this very personal new material.

BGS: Can you talk about growing up on the move? Were you playing music and writing back then?

Michaela Anne: I started playing piano when I was about 5. I wrote a few songs right away, instrumental piano pieces and the first one I wrote was called “When Daddy Comes Home.” So from the very beginning, it has always been a sad longing feeling, because I missed my dad when he was out to sea. Then we moved a year later and every time we moved there would be a transition period of, “OK, hurry up and find a music teacher!”

I wasn’t writing. I didn’t write any more songs until I was 17, when my grandfather was diagnosed with lung cancer. That was the first time I wrote a song with lyrics. Then the second time I wrote a song with lyrics was when I moved to college. So everything for me, and I’m actually just realizing this, has all been a result of something that was sad. A sad experience or a longing for.

Do you find there is a transient parallel in touring at all?

Oh yeah. It is different because you live in one place but you miss out on a lot of stuff. It is hard to keep friendships together when you’re gone for a month and then you come home and you’re tired and you don’t really feel like going out. How do you stay in people’s lives when you are missing the big events? That feeling of not really being a part of friend circles because you are missing out, that’s been my entire life. This deep FOMO. It isn’t a fear of missing out. I actually miss out a lot.

What led you to record this album in California? When you were writing it, did you know you’d be making the record there?

I didn’t, which is interesting to me because multiple songs mention California. The West Coast, in general, has always had a nostalgic, warm, romantic feeling to me. It’s funny. I’ve never thought I would move back to the West Coast because I feel like I want to keep it as a magical reprieve. So I wrote some songs out there and for some reason, it kept coming up.

I also wrote a bunch of songs in Arizona. So the Southwest, paired with the West, infiltrated my songwriting. But that wasn’t part of the plan when I was writing the songs. I’d toured a bunch with Sam Outlaw and he’d said in passing that he wanted to produce my next record. I blew it off as a joke and thought it was funny.

Then I started considering it when I was really figuring out how to make a new record. I entertained a few different producers and Sam brought in Kelly Winrich, who is from this band called Delta Spirit and he has this more indie rock background. He doesn’t really come from the more country world, which I really wanted.

It just kind of all organically came together. Kelly is from San Clemente and his parents built out their basement into a studio. I went out there for two days to do a trial run to see what it would be like. I’d also never worked with two producers at the same time and didn’t know if that would make things more complicated.

Had they worked together before?

They had. They had worked on one of Sam’s early records together and they were longtime friends. I felt like I was very cautious before I made a decision but it all went really well. Then we hired a bunch of LA-based musicians with the addition of my friend Kristin Weber, who is from here in Nashville. She flew out and did strings and background vocals.

It happened naturally and it was really amazing to record in a beautiful setting but be really focused. I didn’t have to deal with the day-to-day living of making sure my cats are fed and making sure my house is clean and all that stuff. It was an ideal setting, for sure.

Was there a fleeing from Nashville to California to make the record?

I don’t know, maybe a little bit. I feel like I might be one of those people who has a love-hate relationship with wherever I am. I felt this way about New York and I now feel this way about Nashville — that I see the good and the bad. I think when you are surrounded by a lot of people pursuing similar career paths and when everyone around you is about music, it can feel like a bubble, and I think it is not healthy to live in that bubble.

It’s important to remember that there is such a diverse, large world out there of different careers, different pursuits, different passions. I’m really inspired looking around and seeing so many people figuring it out and being creative but it also can trigger insecurities of, “Oh my gosh, everyone is doing this. Why do we need my voice? What do I have to contribute and how am I saying what I’m saying and how is it different or alike with somebody else?”

That can be really distracting. So getting away from it is helpful. To just be creating your work and not be thinking about it in terms of who else is doing what and where you fit in with all of it. That can be poisonous.

How do you typically write lyrics? Does the melody follow or lead that process?

I usually come up with a melody first. I’m never someone who is just writing lyrics. I’m not a poet. I think in melodies and the words come with it. Then I have to consciously go back once I have a melodic structure and think about where I want to get to with it.

I was comforted when I read Jeff Tweedy’s memoir that he just released. He said that the way that he writes songs is that he mumbles a lot and crafts the song while mumbling gibberish. It was the first time I’d heard of a songwriter doing that and it makes me feel so much better. I’ve considered it a weakness. Like I’m just writing based on what sound feels good in my mouth and not looking at it as a piece of literature. I felt very seen when I heard that Jeff Tweedy does that.

The character in “Desert Dove” seems like one that you know a lot about.

I’m always saying I feel like I could write a novel about that song. It is so many different people to me. I see myself in that character in many ways. I met this woman years ago at Pappy and Harriet’s who was a stripper. Her name was Madeline and she was wearing a white dress that was off her shoulder.

She was this beautiful charismatic woman who I was really drawn to in that one evening’s conversation and then from there it expands to all these other women characters that I’ve read about or learned about from talking to friends. This book Soiled Dove is an historical account of different real-life women who were prostitutes or madames in the Wild West.

It’s like a lifetime of research. How long did it take you to actually write it?

That song came out so fast. I was in Arizona in Cave Creek on a little writing retreat. I knew I had this song about a Wild West prostitute in me for years for some reason. When I was really young, I went to a spiritual healer who told me I was a prostitute in a past life. Maybe that gives you a little glimpse of the complexities of my upbringing.

I was raised in a very traditional family home. That my dad was a nuclear submarine captain but my parents were very interested in lots of different spiritualities and dynamics. When I was back at the apartment I was staying at, I was making a sandwich and I opened my mouth and the first line of the song came out. I think I finished it within a day or two.

Your characters have dimensions of the good, the bad, and the ugly. They feel honest, particularly in “Somebody New.” I read that someone told you once that women shouldn’t be the perpetrator in songs or be in a guilty position. Did that advice ever inform your writing or is it informing your writing now as an act of rebellion from that advice?

I feel like with so many songs there are a few different narratives. Especially in the country world, and this is a huge generalization, but the idea that the woman is the one that gets cheated on but she’s the one that has to then be vengeful. Or like the sad, sullen songs that are like, “I was wronged and as the narrator, I’m the innocent victim in this.”

I just feel like no situation is actually that clear cut. I feel like we have a role in every single situation we find ourselves in. I think it is hard to portray that in a three-to-four-minute song because you’re telling this very complex story of, “I’m really hurt but also I did something that hurt you.” I think that’s real life. How do I portray these very human characteristics? I create these characters, but you know, I’m in every one of those.