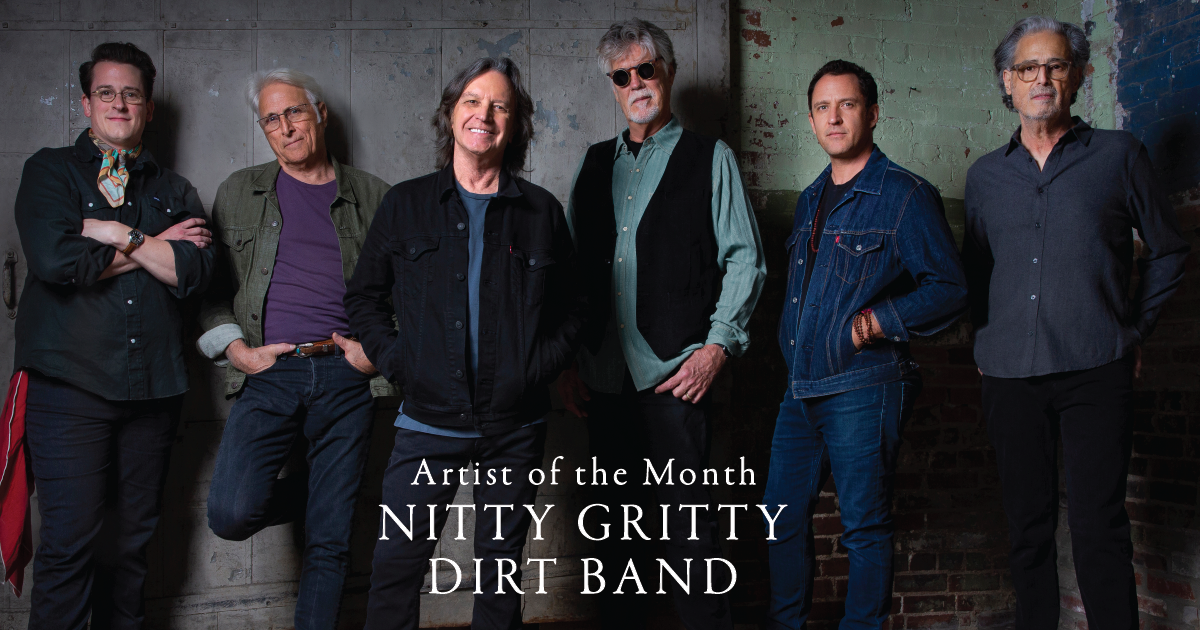 It’s fitting that the track list for Dirt Does Dylan, Nitty Gritty Dirt Band’s new Bob Dylan tribute album, includes “Forever Young.” Coming up on six decades since they formed as a group of young folk enthusiasts, the Dirt Band still sounds plenty spry. Revisiting the songs of Dylan, an artist who is very much part of their collective DNA, was an opportunity for the Dirt Band to reconnect with their own roots — especially the loose-limbed rundown of “Country Pie,” the penultimate track on Dylan’s Nashville Skyline album from 1969.

“We started out as a jug band in 1966, and the approach to that one was very much like that, kind of warts and all,” says Dirt Band frontman and co-founder Jeff Hanna. “We didn’t have a washboard or a jug, but Jimmy Fadden was playing a tape box with brushes and had on a harmonica rack. We were all gathered around a Telefunken mike from 1947, and Bob Carpenter started everybody whistling, too. Pretty cool, like we’re a Dixieland jug band. People like to dissect Dylan, but I’m pretty sure ‘Country Pie’ is just about pie.”

Somehow it’s been 13 years since the Dirt Band’s prior studio album, 2009’s Speed of Life. Dirt Does Dylan makes around 30 albums they’ve released over the years, and it’s the first to feature their current lineup. Along with long-timers Hanna, drummer/harmonica player Jimmie Fadden and keyboardist Bob Carpenter, the 2022 edition of the Dirt Band features bassist Jim Photoglo, fiddler/mandolinist Ross Holmes and Jeff’s son Jaime Hanna as singer/guitarist. Prior to the Dirt Band, Jaime was a sometime member of The Mavericks while also playing in the duo Hanna-McEuen with Jonathan McEuen, son of Dirt Band co-founder John McEuen.

“My brother and I used to sing Dirt Band songs along with the records, and with our dad,” says Jaime Hanna. “All very informal. I didn’t really start singing seriously until after moving to Nashville when I was 19. So my dad and I have sang together for 30 years and we know how to sing with each other since we’re, you know, related.”

“Blood harmony, as they say in bluegrass,” adds Jeff.

Early on, Jackson Browne was in the Dirt Band’s initial 1966 six-man lineup before departing for solo stardom, but the Dirt Band actually had a hit before he did. Released in 1967, “Buy for Me the Rain” just missed cracking the Top 40 of the Billboard singles charts. Continuing forward, the Dirt Band evolved beyond its jug-band roots to the country rock then blossoming in California alongside the Flying Burrito Brothers and Byrds — whose 1968 album Sweetheart of the Rodeo would be formative for generations of artists.

“Sweetheart had a huge impact on everybody, including us,” says Jeff. “So did Buffalo Springfield, and The Lovin’ Spoonful on the East Coast. Our band was right on the cusp of awkwardly transitioning from acoustic jug band to the California country-rock band that made the Uncle Charlie album in 1970, when we put our own spin on it.”

Uncle Charlie & His Dog Teddy yielded the Dirt Band’s biggest-ever hit, a definitive cover of Jerry Jeff Walker’s “Mr. Bojangles,” which cracked the Top 10 in early 1971. They would come close to matching that a decade later with hits including “An American Dream” and “Make a Little Magic,” a period when they were on the pop charts a lot more often than the country charts.

But over the long haul, country music was where they wound up after the pop hits faded, in part because those roots were so strong. The Dirt Band’s country roots were certainly at the center of their signature album, Will the Circle Be Unbroken, which was released 50 years ago. Featuring a cast of country, folk and bluegrass legends — Earl Scruggs, Doc Watson, Mother Maybelle Carter, Roy Carter and Merle Travis among them — Circle was an intergenerational summit that stands alongside Sweetheart as signpost for what came to be Americana music.

“The impact of Sweetheart was a mind-altering gateway for expanding boundaries in acoustic music, and it took us to Will the Circle Be Unbroken,” says Jeff. “That impact turned out to be profound. The festival scene was just starting to broaden. Everybody in the bluegrass world had to keep things traditional. But Circle helped keep open the door that John Hartford, Newgrass Revival and Earl Scruggs Revue had cracked open. It’s humbling to have been part of that.”

One of the most notable aspects of the first Circle album (there have been two sequels) was the between-song interludes of dialogue. Dirt Band manager/producer Bill McEuen kept tape recorders running non-stop during the sessions, capturing priceless spoken-word bits from Carter, Watson, Acuff and others. It made for a complicated and time-consuming editing process at the back end, and was the major reason that more than a year elapsed between the time Circle was recorded and then finally released. But it was worth the wait.

“We were still out there touring for Uncle Charlie and we kept asking when it was coming out,” Jeff says. “Bill would say, ‘Trust me.’ And he did a masterful job editing and assembling all of it. We had no idea what a treasure trove of oral history would come out of that. Just to hear Mother Maybelle, Doc and Earl and Merle Travis and Jimmy Martin talk was remarkable. When Bill finally played it for us, it blew our minds. Then he had to convince the record company that this very expensive three-record package would be viable in the market. It retailed for 12 bucks, a lot of dough in 1972. But…it worked out.”

As designed by Dean Torrence, the Dirt Band’s regular album-cover designer (and also the “Dean” in the rock duo Jan & Dean, of “Dead Man’s Curve” fame), Will the Circle Be Unbroken also had a symbol that would probably not pass muster today. It looks like the cover of a photo-album scrapbook about the Civil War, with a portrait of the obscure Union Admiral David Porter flanked by two sets of flags — American to the right, Confederate to the left.

“There was a metaphor there, about hippies versus rednecks in 1971,” says Jeff. “Now that’s a horrible way to describe our friends from the South. But we were longhairs from California, and none of us grew up playing this music on back porches in Appalachia. So here we were coming to Nashville to record with a lot of folks that appeared to be pretty conservative, although we never talked politics. But there was definitely a cultural and generation gap with the Vietnam War raging, protests in the streets. It was quite a time. And for that time, those flags seemed like an innocent metaphor.”