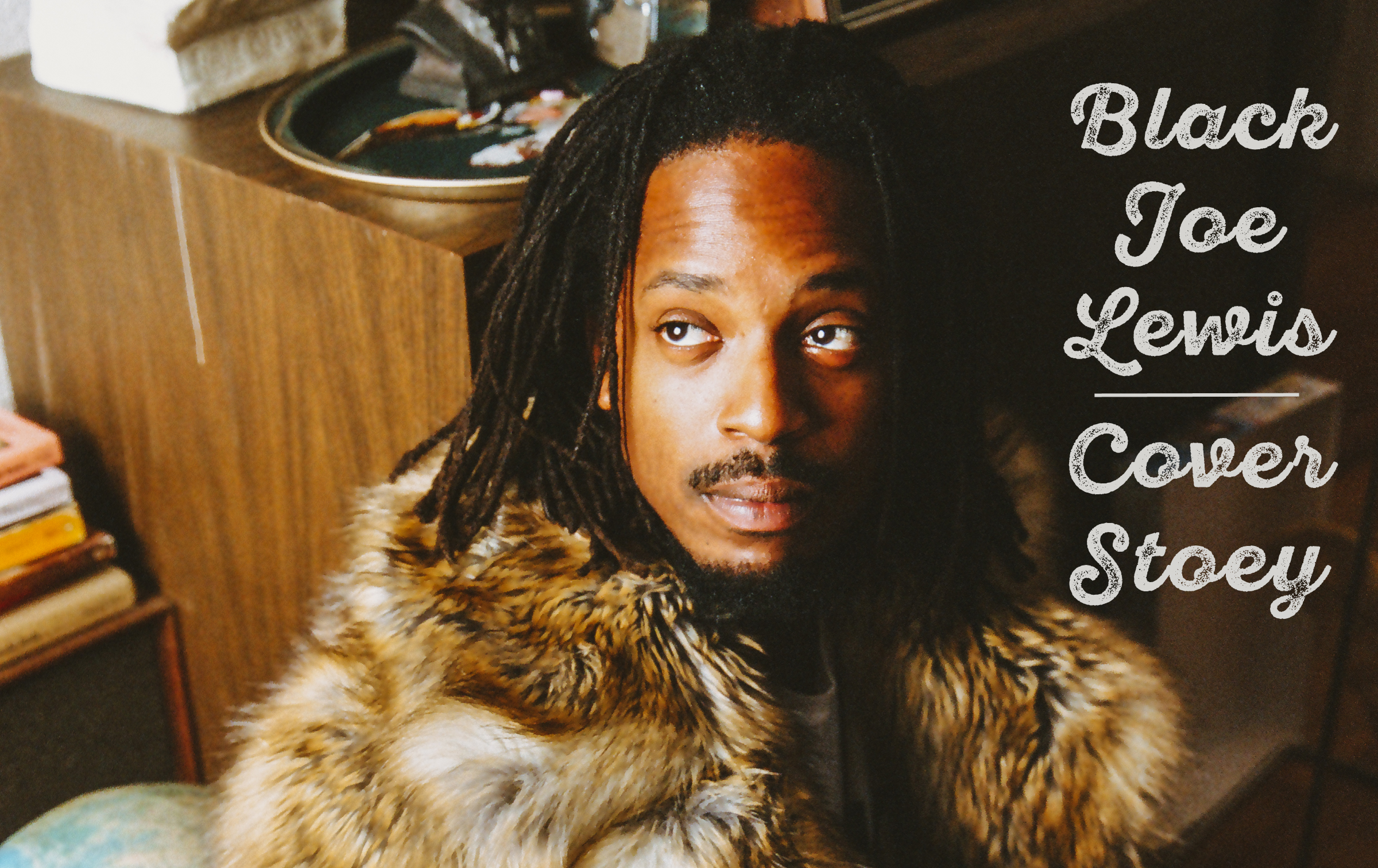 The acronym, as unsexy of a word it might be, has been the base of hundreds of great songs: Michael Jackson’s “P.Y.T,” Kanye West and Jay-Z’s “H.A.M,” Grand Funk Railroad’s “T.N.U.C.” Part of the mystique is often figuring out what the hell those letters actually stand for and why they’re even important to begin with. Or, sometimes, it’s because the result is simply N.S.F.W. (not safe for work). “PTP,” from Black Joe Lewis & the Honeybears‘ new LP, Backlash, is a little bit of all of that. The track, deliciously raucous with unpredictable spirals of guitar and crunched aggression, stands for “Power to the Pussy,” a bit of a calling card he picked up from his cousin Tiffany. It’s a chant about female sexual freedom that seems even more topical in the Trump era, with pink pussy hats marching everywhere from Main Street America to Washington, D.C. There’s a lot of forecasting on Backlash, the band’s fourth album, which even has some Russian lettering on the album art (a covert way to mention, in another language, that he’s back with the Honeybears).

Lewis isn’t a spy for the Kremlin, but he is quite good at taking elements of American sonic lore — classic soul, R&B, and blues — and mixing them with full-throttle rock ‘n’ roll. Though some might tag him “throwback,” it’s really anything but: The urgent grooves of “Sexual Tension,” the blast of horns that ends “Lips of a Loser,” and the punk energy of “Shadow People” are all as modern as anyone who might choose a Big Muff over synth keys.

Backlash is the Austin-based Lewis’s first album in three-and-a-half years — the longest break of his recording career, and a product mostly of a careful, thoughtful process that took a little longer than the normal recording cycle tends to allow.

Backlash has an incredibly strong rock ‘n’ roll spirit, beneath all of the soul references. Does it bother you to constantly be referred to as throwback?

It doesn’t bother me really. You have to have a way to classify stuff. That’s just what people do. I’m more annoyed with how, nowadays, people won’t find out about you unless they’re told by a blog that it’s something good versus actually checking it out. It’s gotten so cheapened.

Do you feel like rock ‘n’ roll, itself, gets a fair shake in the scheme of things? And on those blogs?

In popular music, it’s tougher: Rock ‘n’ roll is just not big anymore. And I feel like, back in the day, you had to go to the record store and actually check shit out, to see if you liked it. There was a word of mouth, but now people need to be told.

So is the live show even more essential these days because of that?

Yeah, with the way that stuff is now, it’s the best way to get the music out. You gotta prove the hype versus what you actually are. 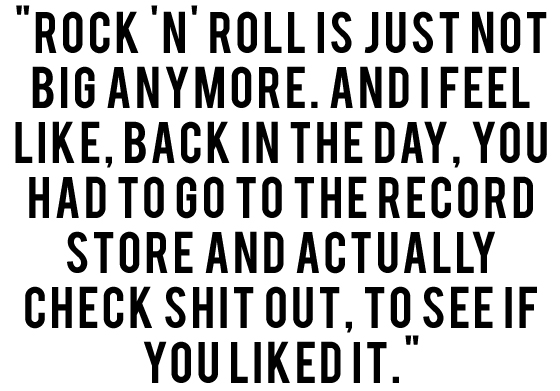 These days, a lot of soul music doesn’t always fall under the umbrella of “Americana,” maybe limiting how much the music is found from those very audiences. Do you think soul and R&B should have more of a table in Americana?

Yeah, dude, for sure. I think blues is; but I would say Americana is traditional American music, if you ask me. And this is classic stuff.

You’ve been outspoken on your Twitter page about the Trump administration. Do you think artists have an obligation to speak out on social and political issues?

I try to keep politics to a minimum because I feel like people want to hear me play music. I think it’s better to say things through your music. Social media is not real life, and I don’t think you can judge a person on social media. I put crazy shit up. But I can’t stand Trump. I fucking hate him and I don’t feel like he’s making people feel like they are welcome in this country. He’s spreading the hate.

Do you think all the resistance and reaction to Trump’s reign will breed music that’s activist at its core?

Yeah, I hope he’ll spark a wave, like in the ’70s or ’80s with angry punk rock stuff. Or the ’60s — you had war and all that shit inspiring music. We’ll see what the youth has, what they’re going to say.

Do you think you’ll react politically in your music?

We’ll see. I think eventually. I try to let the songs go where they want to go, and there will probably be a song.

There’s some Russian lettering on the cover art of Backlash. You sure you’re not trying to send a message to Putin?

I did that before that shit even happened. It’s kind of crazy. That was the Honeybears thing. We tried to drop the name and everyone got confused. I figured, if I had to put the name [of the band] on there, it might as well look cool. People just don’t like to do the research, I don’t think. It was always the same band, but different dudes. It’s kind of weird that stuff is like that now. It blows.

“Power to the Pussy” could be an anthem from the Women’s March, so that’s probably more evidence that you aren’t spying for Russia.

It’s the power of the pussy, dude! My cousin coined the term. It kind of falls into what’s going on — we’ll see if I get it to be in the next march.

Where did the phrase “Flash Eyed,” the album’s opener, come from?

That’s from Amos Tutuola, a Nigerian folk dude. He has a story about being lost in a jungle with all these different ghosts and one is “flash-eyed.” 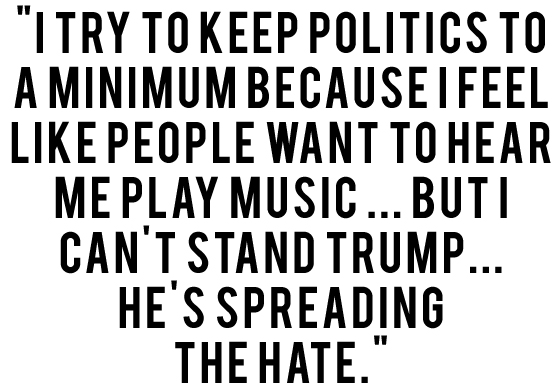 It seems like you take inspiration from all kinds of places — Nigerian folk stories, your cousin, and everything in between.

I take inspiration from life, I guess. I like to read, and I’ll read a cool story about someone and go with that. Life in general — anything I see around me — it ends up coming out in the songwriting. I like having a cleaner vocal sound so you can understand what’s going on lyrically.

What are you reading right now? Do you feel like the value of literature has decreased in the social media era?

Overall, people read less with all the stuff that we have out there, though not artists, I don’t think. I’m reading [Russian writer] Maxim Gorky. I’ve been reading all his stuff lately. One’s about this spoiled rich dude, the Russian version of There Will Be Blood. The kid grows up and is an asshole.