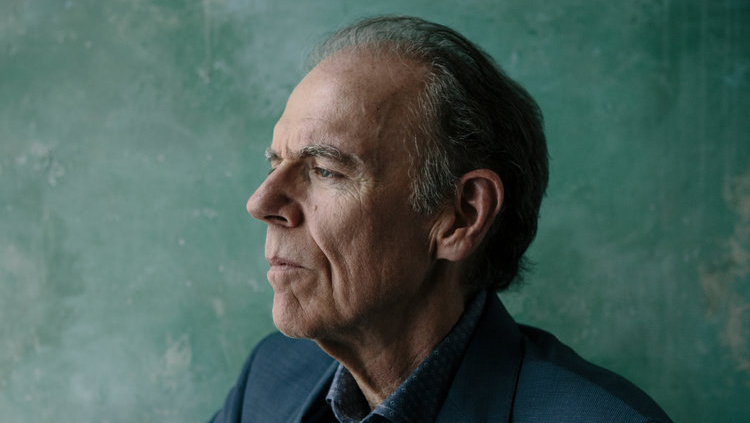 Nowadays we make pinhole cameras and don special glasses to take it in, and we forget that an eclipse must have once been terrifying. We’ve got thousands of years of science and human experience to reassure us now, but what must the first one have felt like? Unexplained darkness in the middle of the day, no idea if or when the sun would reappear—it had to have been unnerving to say the least. It’s a novelty now because we know it’s nothing to worry about; the sun always comes back.

That’s not why legendary songwriter John Hiatt chose to name his latest record The Eclipse Sessions, though it was recorded during the solar eclipse in August 2017. (“I never know what to call these things, so this one kind of presented itself and it seemed to fit,” he says.) But with four years in between it and 2014’s Terms of My Surrender, the highly prolific Hiatt was forced to similarly wait calmly for something he knew would return eventually.

“I don’t really consider writer’s block a state anymore,” he says. “I mean, I’m either writing or I’m not writing; it doesn’t really matter. You know, I go for periods where I don’t write, but the only sort of discipline I have regarding songwriting is I pick up a guitar pretty much every day for a half hour, hour, two hours, and if a song is gonna come, that’s usually when it comes, when it shows up. So I’ve always done that since I first started playing guitar when I was 11. … I guess I’ve had enough of a life of songwriting that I figured they’ll come eventually, you know. You only have writer’s block if you tell yourself you have writer’s block.”

These songs came after a period of transition that included moving into the city of Nashville after 25 years in rural Williamson County. After wrapping a long tour in 2015, Hiatt cut his dates in half, now aiming for about 60 or 70 shows a year. “And then just getting older,” he adds. “You know, I turned 66 this past summer, so a lot of things converged all at once to come up with a different set of songs with different subject matter.”

He continues, “I always use the old Guy Clark quote, when do you know when it’s time to make a record? He said, ‘When I’ve got 10 good songs,’ so that’s kind of the rule of thumb I go by. It’s always if I get a batch of songs together, then it’s time to record. So I didn’t have any until finally I had about 15 songs at midsummer last year. It took me a couple years between Terms of My Surrender and this record just to start writing. We’d been touring pretty relentlessly through the end of 2015. And like I said, with all the other shifts in my life, it took me a minute to see the next train, what station it was gonna leave out of.”

Once Hiatt amassed a decent amount of songs, he booked time in a studio south of Nashville owned by Kevin McKendree. Although he had considered a solo acoustic approach, he brought on drummer Kenneth Blevins and bass player Patrick O’Hearn for the sessions, resulting in what Hiatt calls “a little happy accident.”

“I still wasn’t convinced I was making a record. I just had some songs,” Hiatt explains. “I said ‘I’ll just bring my little Gibson LG2 and play acoustic, and I’ll just sing and play the songs and you guys just play along with me, we’ll just put them down on tape and see how it goes’ and that’s what we did,” Hiatt says. “And then next thing you know we were doing about three songs a day, and we’d get about three recorded and Kevin would come put piano or organ on it almost immediately and we’d go home at night and his little son Yates McKendree, he was 15 years old at the time, would come in at night and put an electric guitar part on, and that’s how the record got made.”

The unplanned nature of The Eclipse Sessions has led Hiatt to liken it to two of his most beloved albums, 1987’s Bring the Family and 2000’s Crossing Muddy Waters, and while he won’t go so far as to say that he works best flying by the seat of his pants, he admits that “I sure enjoy it when that happens, let’s put it that way. … It doesn’t always happen. But yeah, it always feels the best. When it works, it’s great, and when you feel like you come out with something that has a flow to it and has a beginning, middle and end that feels like it’s of a piece—that’s what I meant when I said I felt that those three records had a common bond.”

To a certain extent, all of his work shares that serendipitous quality because he’s careful to never force a writing session, preferring to wait for inspiration to strike naturally.

“My experience with that is I set myself up when I tell myself that I’m gonna write a song because it almost never happens,” he says. “So I just play guitar. I give myself the tools that make songs happen, and if it’s gonna happen, that’s when it’s gonna happen. And if it doesn’t, that’s fine too. You know, it’s just music. So I just put myself around the music and I play and I sing, yodel, whatever the hell it is I do, because I enjoy it. Like I said I’ve done it since I was 11, and I’m 66, so that’s a pretty long time at it – 55 years, Jesus Christ, that’s over half a century. It’s just part of who I am. So if I’m gonna write a song, that’s how it happens. Some days I write and some days I don’t. There’s no pressure.”

That’s how he came to write “Over the Hill,” a meditation on aging about a man who’s “long in the tooth” but still eager to take “huge bites of life.”

“I’ll get a melody going and I’ll be singing nonsense and then hopefully some sort of lyric idea will pop through and then I’ll get a line, and that’s what happened with that one,” Hiatt says. “I got that line ‘I’m over the hill, under the bridge, got a few peaks and valleys I ain’t seen’ and I thought ‘well that’s interesting, let’s write that, what’s that guy talking about?’ So that’s how that one kind of got started and then it was all about that, how do you deal with old age? You know, it’s a wonderful period of your life and yet it’s diminishing too, so it’s fascinating how you deal with that.”

And while he’s more than half a century removed from the first song he wrote (“Beth Ann,” at age 11, for a fifth-grade classmate he had his eye on), Hiatt has no plans to stop writing, recording and performing—no matter how “over the hill” he gets.

“Even if it was just at the corner pub, it wouldn’t matter to me,” he says. “I wanna write songs, I wanna sing, and it kinda doesn’t matter where I do it or how I do it. I’m very fortunate I get to do it, and I’m extremely grateful that I’ve been able to do it and make a living and have a family, and it’s been wonderful, but I would do it regardless.

“It’s the same stuff I’ve pretty much always enjoyed doing, which is telling stories about the agony and ecstasy of life, the will of love to overcome and the pain, the agony of defeat and how we pick ourselves back up and go on in spite of the worst of it,” he says. “That stuff, the stuff that makes us all get up in the morning and go at it.”

The stuff we’ve come to trust we’ll always get from John Hiatt, as sure as the sun.