Kaki King Creates Sacred Space for Musicians with Other Cathedrals 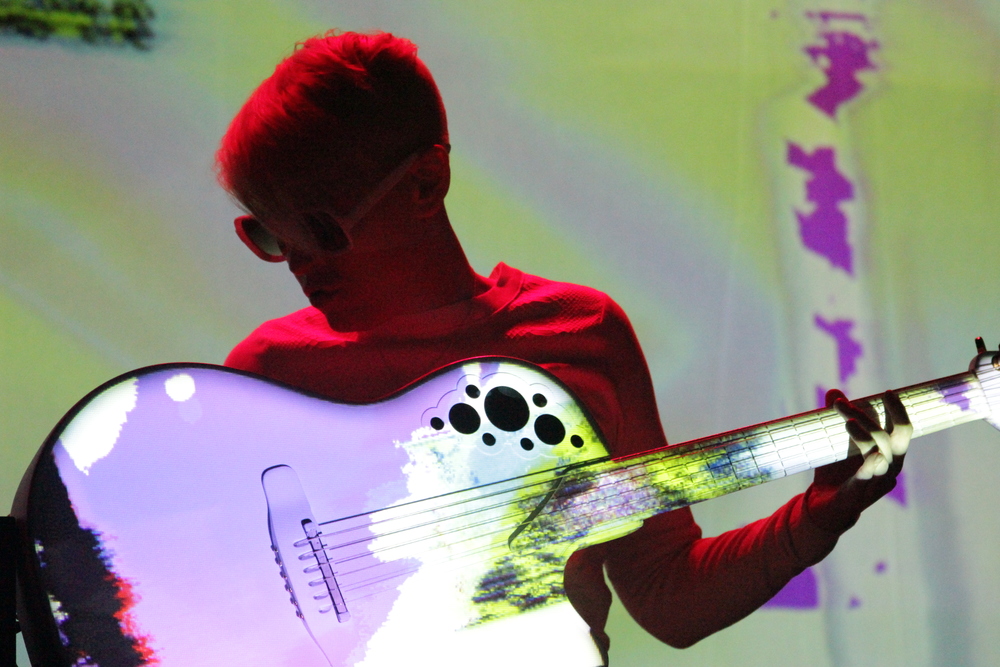 For the uninitiated, Kaki King is one of the best guitarists playing today. Since releasing her debut album, Everybody Loves You, in 2003, King has made a name for herself with her unique style of playing, which incorporates unusual tunings, unorthodox instruments, and a preternatural ability to switch between genres in the matter of just a few notes. Over the course of her career — and in addition to releasing eight full-length albums — King has been named a "New Guitar God" by Rolling Stone, helped soundtrack major motion pictures like Into the Wild, and developed a touring multimedia show called The Neck Is the Bridge to the Body, named after her 2015 album.

King's most recent project is Other Cathedrals, a private musical space in Brooklyn that enables the Atlanta-born musician to share her passion (and her guitars) with the general public. Visitors of Other Cathedrals, which derives its name from the Adrian Legg album Guitars and Other Cathedrals, can take advantage of the space's recording studio, private rehearsal space, lessons, and, perhaps most exciting, a "library" of more than 30 of King's own guitars, most of which are high-end.

"There were several different ideas and problems I was trying to solve," King, an avid guitar collector, says of starting Other Cathedrals. "The first was that I really got to the place where I did have too many guitars that could not be maintained and played on a regular basis."

Her primary motivation, however, was providing people in her community with access to musical equipment they otherwise would likely never be able to touch, let alone sit down and play. "About a year ago, I started teaching privately and I noticed that a lot of really great players had totally outgrown their guitars and had no idea," she says. "They would do something, I’d say, ‘Okay, try this’ and they would play it on their guitar and they’d be like, ‘Well, how come it doesn’t sound like you?’ And I’d say, ‘It’s really not you. It’s actually your guitar.’ There wasn’t enough education about their $300 entry guitar versus an $800 mid-range versus something that was hand-crafted and cost a lot but, in the end, would be worth it, if they were going to continue with their studying and playing."

The space also serves as a refuge for those who get the jitters upon walking into a music store, an environment King herself says can be "intimidating" and one that, while nerve-wracking for any beginner, isn't always the friendliest to its female customers. King is quick to note, however, her hope that Other Cathedrals attracts a diverse array of players.

"I had anyone in mind that would have felt overwhelmed," King says. "But I almost feel like I did this in homage to her — I saw someone who was at a store and she wasn’t a half-bad player, but she clearly was being ignored. I had my daughter with me — my daughter is two years old and she’s just crazy, otherwise I would have said hi — but, and I may just be making this up, but she really seemed like a cool player who wanted to check stuff out. I think things have gotten so much better recently, especially in Brooklyn where people are being very practiced and very cautious about how they treat members of the opposite sex, but I still know that this is a problem all over, everywhere, and it’s kind of a micro-aggression of assuming that you don’t know what you’re doing as a female, versus assuming you do as a male. I want anyone, including many, many, many, many women who have felt intimidated by the whole process, to be able to come here and feel very safe and secure and I want to be as helpful as possible."

Right now, if you want to take part in all Other Cathedrals has to offer, the space is currently booking applications through its website. King explains that it's a simple vetting process, in place only "to make sure that no one disrespectful is going to come and create any problems." She also plans to establish a scholarship for a female player who otherwise would not have access to such high-end musical equipment.

"I don’t want to ever turn anyone away for lack of funds, so that’s why the scholarship exists," she says. "And I want the people who do have the money to pay for it, so we can include those who are having a harder time with that.”

In addition to providing valuable resources to fellow musicians, King hopes Other Cathedrals is a space that gives visitors an experience she feels is essential to the creative process (one that in New York City is, unsurprisingly, often hard to come by): one of solitude and of freedom, buoyed by the safety to explore musical impulses. "When people come here, it’s not about being on a clock," she says. "There’s no noise on the other side of you and no one can hear you. That alone time is so crucial, if you really want to get to the core of what you want to do musically. Sometimes just being alone is enough."

Lede photo courtesy of the artist