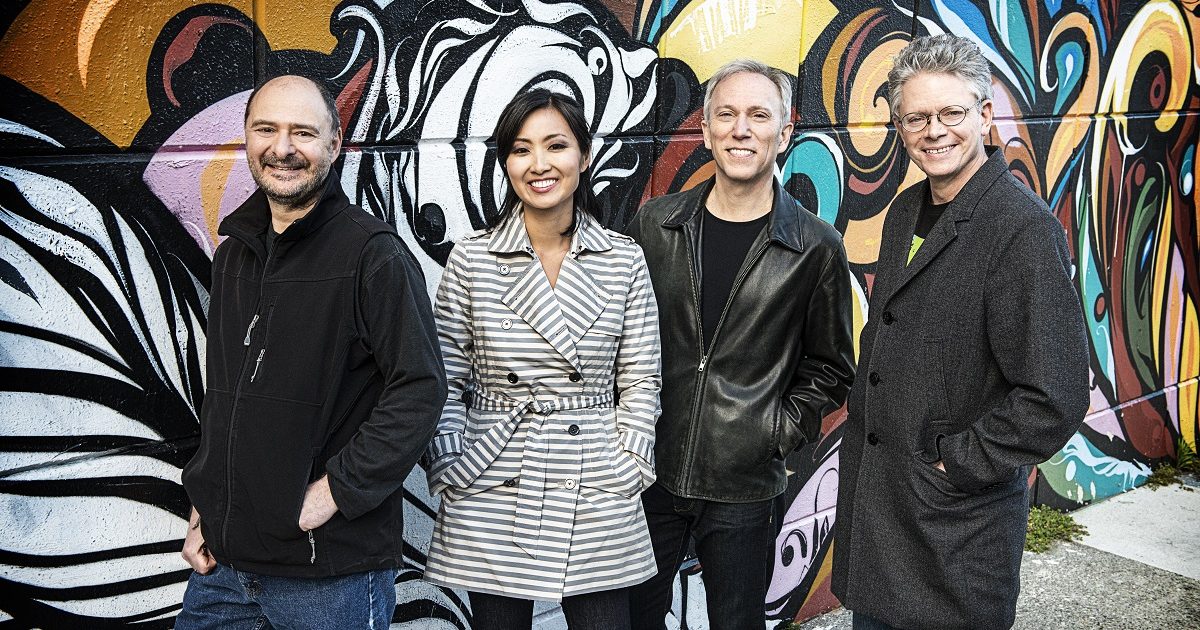 “There’s no place like home,” says David Harrington, co-founder and leader of the venerable Kronos Quartet, with a little chuckle.

It’s not just because of the smoke from California fires or the pandemic lockdown at his San Francisco home. With the new album Long Time Passing — Kronos Quartet and Friends Celebrate Pete Seeger, Kronos, after more than 47 years of redefining the very nature of a string quartet through explorations of music traditions and contemporary composers from around the world and, to many ears, exotic, is having something of an Oz moment.

Seeger, of course, was one of the key figures of American folk music, from the early 1950s until his death in 2014 at age 94. The album includes interpretations and adaptations of some of the most beloved songs of the folk canon, among them “Where Have All the Flowers Gone” (which gave the album its title), “Turn, Turn, Turn,” “Kisses Sweeter Than Wine,” “If I Had a Hammer,” and “We Shall Overcome,” which Seeger helped bring to national prominence during the Civil Rights movement of the 1960s. All are transformed through the Kronos prism, which has made magic with everything from Thelonious Monk tunes to Bollywood soundtrack songs to young Iranian and Afghani composers and, spanning decades, an ongoing relationship with American avant-garde composer Terry Riley.

Among the friends on board are young American folk singers Aoife O’Donovan, Brian Carpenter, Lee Knight and Sam Amidon, Spain’s Maria Arnal and Ethiopian-born Meklit. Amidon is making a repeat appearance, having been one of four singers along with Rhiannon Giddens, Natalie Merchant and Olivia Chaney, who joined Kronos for 2017’s Folk Songs album. That collection of American and English-rooted songs is something of a precursor to this new one.

Harrington resists the notion that this is somehow a break from what Kronos has done in the past. “I think all of our work is related,” he says. “For me, Pete Seeger’s work is an extension or a variation of [composer George Crumb’s] ‘Black Angels’” — a keystone in the Kronos repertoire and the work that inspired the group’s formation in the first place — “and Bartók and Beethoven and all kinds of music.”

Making that point emphatically is the piece that is arguably the core of the album: “Storyteller,” a 16-minute sonic collage combining Kronos’ playing with audio of Seeger from interviews and on-stage talk throughout the years, all composed and assembled inventively by Jacob Garchik, a regular Kronos collaborator. The ambitious work made its concert debut last year at Kronos’ San Francisco festival.

“He has been part of our work for probably 15 years,” Harrington says. “It’s so wonderful to see him flower as a musician. Jacob and I have had innumerable conversations about all aspects of music from traditional cantorial music to pygmy songs. It seemed really natural that Jacob would be part of Long Time Passing and that he would make a piece that would bring Seeger to life.”

As well, there is no lack of global cultural reach here. There are songs in Spanish, German, and a South African dialect, plus the instrumental “Raghupati Raghav Raja Ram,” associated with Mahatma Gandhi’s 1930 Salt March protest, which Seeger learned on the instrument bhajan on a trip to India and made a regular feature of his concerts. In one “Storyteller” passage, Seeger himself is heard singing “Where Have All the Flowers Gone?” in German. Arnal sings two songs, recorded in Barcelona last year, one being the Spanish Civil War ballad “Jarama Valley,” a bloody tale of fighting the fascists, written to the tune we know as “Red River Valley.”

And then there is “Mbube,” the South African tune that transformed into the international staple, “Wimoweh/The Lion Sleeps Tonight.” This serves as tribute to Seeger’s lifelong dedication to finding and sharing songs from other cultures, following in the footsteps of his father Charles, a musicologist, folklorist, and composer.

“Alan Lomax [the famed folk archivist and producer] gave him a pile of LPs that they were going to throw out at the Library of Congress,” Harrington said. “Lomax said, ‘I’ve got these LPs from Africa. Would you like to listen to them?’ Seeger comes over and in the middle of the pile somewhere is that song. I mean, what a story! The Weavers [the ‘50s group Seeger was in that launched the folk boom] started singing it. Then the Tokens had the big hit. And then Disney picked it up for The Lion King. I mean, that’s culture. That’s the way it works. But what an ear Seeger had!”

Meklit’s performance is not in Ethiopian. Rather, the Bay Area-based artist was asked to do the elegiac “The President Sang Amazing Grace,” a relatively new song by songwriter Zoe Mulford, inspired by President Barack Obama singing the hymn at the pulpit of the Mother Emanuel American Methodist Episcopal Church in Charleston, South Carolina, shortly after the 2015 mass shooting there.

“I have always been a fan of Pete Seeger and his empathetic yet passionate advocacy for the people,” says Meklit. “This is a song about how music carries us when the limits of language can’t meet our deepest grief, anger, and heartbreak. It’s about a President who understood that and offered us empathy made of melody. It’s about how the violence of racism and white supremacy continue tear at us and cost people their lives. Ultimately I hope the song provides the smallest bit of catharsis in our ongoing season of reckoning with America’s ghosts.”

Having an East African-born singer do this song honoring Obama, with his Kenyan ancestry, brings a lot together, and while it’s the only song on the album that was not part of the Seeger canon, coming after he died, it fits perfectly in his sensibilities.

“There are all sorts of connections,” Harrington says. “They just happen. It’s part of the texture of our society.”

The real magic of the album is finding the new, the current, in the old material, of bringing into vivid life Seeger as an artist, an organizer, an explorer. It’s there from the opening song, “Which Side Are You On?” a question that as much in Kronos’ hands, with Knight almost channeling Seeger, demands a definitive answer. And it’s there in “Garbage,” again with Knight and a child’s chorus, linking today’s concerns with climate change to the environmental concerns Seeger championed through his life, from well before it was a “movement.”

“In terms of the moment in which we live now, obviously Pete’s music and his sensibilities and his spirit came from troubled times,” he says. “He grew up privileged and he knew it. And he paid it back. He was able to adapt throughout his life and address the struggles and issues that were coming in. He saw a real continuity of it. Now we’re talking about civil rights. Not we’re talking about the environment. Now we’re talking about racial divisiveness. It felt like it was all one thread, the same thing. You can see [today’s issues] through that lens, and you can see it through the continuity of what Pete was through his life and what he experienced.”

Harrington stresses that while the album itself seems like something different for Kronos, he can connect it to the very first work written specifically for the quartet back in 1973, “Traveling Music” by composer Ken Benshoof which quoted “Kisses Sweeter Than Wine.” And that is by no means the only thing on this album with which Kronos has history. He notes that his kids and more recently his grandkids have been raised on Seeger recordings, and that a few years ago the group played “We Shall Overcome” for a third-grade class taught by his daughter. But the song has been in their world for much longer than that.

“The idea of doing ‘We Shall Overcome’ is something that we tried out in New York in the early 1980s,” he says. “At that point we did not have the right arranger. I didn’t know how to do it. We tried it, but it didn’t work. But the flame was always there.”

They finally had success with it a few years ago, in a concert that included a piece featuring tapes the voices of gospel great Mahalia Jackson and Chicago writer, labor activist and radio host Studs Terkel, on whose show Kronos had played a few times. Also in that concert was a piece incorporating recordings of Clarence Jones, Martin Luther King Jr.’s lawyer, telling the story of the “I Have a Dream” speech.

“The only thing we could imagine doing as an encore was ‘We Shall Overcome,’” Harrington says.

So yes, Long Time Passing is, for the Kronos Quartet, an act of coming home.