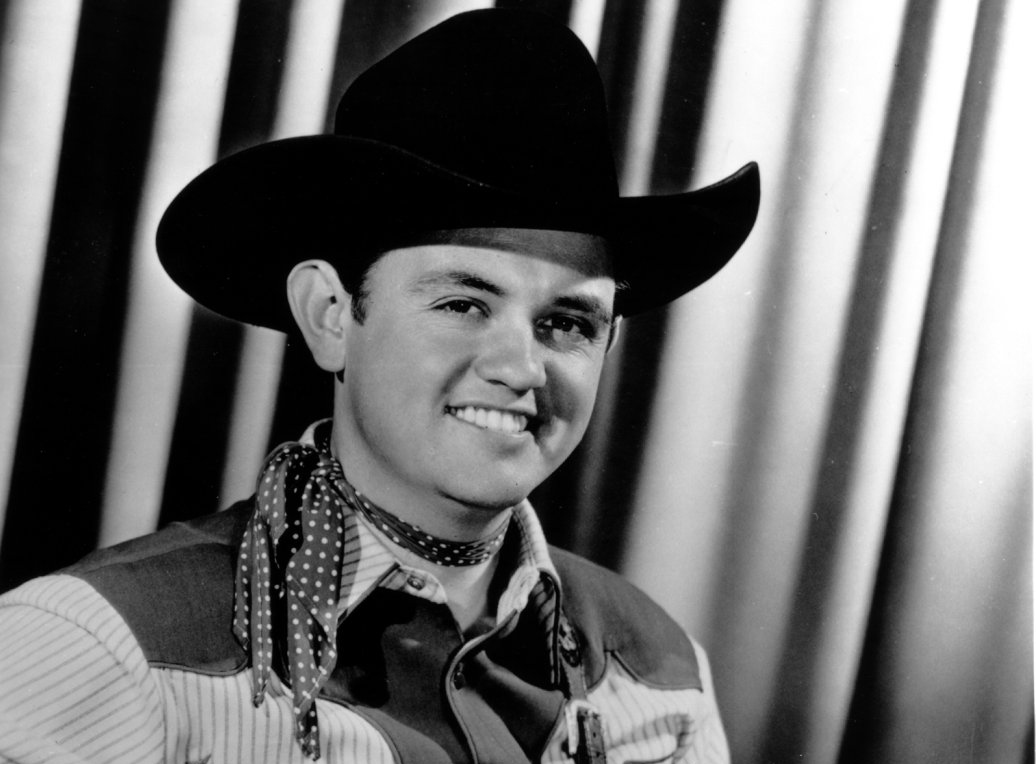 Welcome back to In Memoriam, a monthly series that chronicles Americana legends. So often, one giant is memorialized in their field while the others are displaced to historical footnotes. In Memoriam will spotlight influential musicians that are fading from the collective conscious and commemorate them appropriately. This month, Merle Travis.

Merle Travis is one of the greatest country musicians of all time. His renown does not match his influence. Born in rural Kentucky, Travis overcame nearly insurmountable poverty and went on to become one of the most sought-after and revered guitar pickers of all time. He wrote many of country music’s most enduring classics. His guitar design innovations are legendary. Yet, he’s often only remembered as a footnote to the Chet Atkins story.

Travis was born in 1917 in Roseburg, KY. His family were hard luck coal miners and his early life inspired some of his most well-known songs — “Sixteen Tons” and “Dark as a Dungeon” both chronicle the lives of Kentucky coal miners. At 18, Travis won a talent contest in nearby Indiana that launched his life as a professional musician. He played guitar in the Georgia Wildcats before settling in Cincinnati. There, he performed on WLW radio from 1938 until 1943. Chet Atkins first heard Travis on WLW in 1939 and was inspired to adapt his fingerpicking techniques.

Merle Travis first flirted with national fame after settling in Los Angeles in 1943. Los Angeles in the 1940s was one of the largest country music communities in the U.S. — Roy Rogers, Tex Ritter, and Gene Autry were some of Los Angeles's biggest stars. Thousands of the country’s best honky-tonkers convened on the bourgeoning metropolis. In this throng of urban hillbillies, Travis shined bright. Early on, megastar Tex Ritter took the young Travis under his wing. When the Musicians' Union kept Travis from steady work, Ritter hired him for a tour. When the Union put the kibosh on the tour, Ritter gave him $100. The two collaborated for the rest of their lives. Many of Ritter’s 1940s and '50s albums feature Merle. 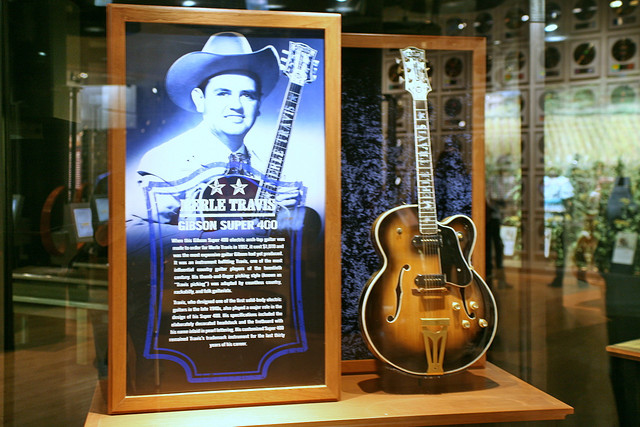 Travis also had luck with television. Through this brand new medium, he found steady work playing for six hours a day five days a week on CBS — an unheard of feat by today’s standards. He also made time to front his own bands and act in B-movies. He finally signed a record deal with Capitol in 1946. It was a fruitful period in Merle’s often tumultuous life. His name was not on the marquees, but he was making a lot of money.

Travis cast a long shadow because he was a triple threat: a peerless guitar player, a brilliant songwriter, and an innovative guitar designer.

In fact, Merle Travis redefined country guitar. His trademark picking pattern was based on a Western Kentucky regional style that developed in the early 20th Century. It incorporated a syncopated bass pattern plucked with the thumb on the first and third count while the index and middle fingers played the melody on the higher strings. It created a huge sound, and mimicked the rhythm and feel of a full band. The technique is now known as Travis picking and it is instantly recognizable.

Like all great players, Merle sought out great musicians in other genres. He incorporated elements of ragtime and jazz into his music — the preeminent bluesman Blind Blake also influenced him. Artists like Chet Atkins have expanded on Travis’s techniques, but none were as groundbreaking. It is a timeless and enduring approach to the guitar that will never stale.

Merle Travis signed with the young Capitol Records in 1946 and had a string of self-penned hits. He tackled the topic of displaced veterans in “No Vacancy,” even while he found success with novelty songs like “Divorce Me COD” and “So Round, So Firm, So Fully Packed.” In a strange twist, most of his own hits during this period did not showcase his sought-after guitar skills. Instead, the recordings highlighted his smooth vocals. In 1947, he released Folk Songs of the Hills. At the time, it was an anomaly in his catalog. It flopped, but has aged well. Merle’s most enduring hits — “Sixteen Tons” and “Dark as a Dungeon” — come from this Kentucky-inspired folk album. Later in life, he reflected on his Capitol records and said, “I had a streak of good luck, but never took recording seriously. All of my records sounded very much alike. I just had fun making them.” You'd be hard pressed to find anyone that agrees. 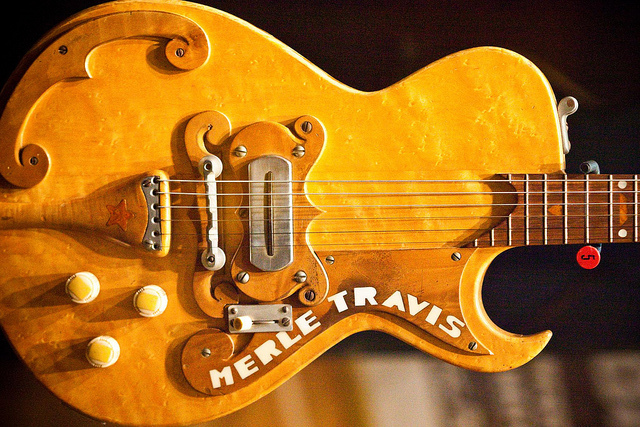 Though it is an oft-disputed fact, history indicates that Merle Travis designed the first solid body guitar. In 1947, he met Paul Bigsby who is now known for his whammy bar contributions. At the time, he was a motorcycle machinist. Travis, Bigsby, Leo Fender, and Les Paul all drank together. (All four are often credited with inventing the solid body guitar.) In 1947, Bigsby built a steel guitar for a friend, and it impressed Travis. He fell in love with the sustain. He wondered why his hollow body guitar didn’t have the same sound. “I came to the conclusion it was all because the steel guitar was solid,” Travis later wrote. “Another pet peeve of mine was changing strings on a guitar. When I lay my guitar down in my lap to change strings, the ones that were on the bottom are on the wrong side. They're awkward to change. I wondered why not put all he pegs on one side.” Travis sketched out a guitar for Bigsby, who went to work on it. It is now cited by most historians as the first solid body guitar. Bigsby built a handful of other guitars, but they are rare and now sell for upwards of $40,000. When Bigsby’s guitar tail pieces took off, he couldn’t handle the workload. When an order came in, he farmed out the work to his good friend Leo Fender. Although Travis’s claims were often doubted, Fender’s former vice president and the MusicMan amp creator Forrest White confirmed the story with Rolling Stone. Merle Travis beat both Les Paul and Leo Fender to the punch.

There are two reasons Merle Travis isn’t a household name. First, he always followed the money instead of the fame. He focused on steady work and playing on other artists' recordings, instead of on his material. The second reason is his personal life: In the 1950s, his drinking caught up with him. He was unreliable as a sideman and incapable of fronting his own band. He was arrested countless times for drunk driving on his motorcycle. In 1956, he pistol whipped his then-wife and held her hostage. His best friend Joe Maphis called the cops, and there was a standoff at the Travis house. It appears charges were never filed, but it was a horrendous stain on an already tarnished career. He managed to scrape by in the 1950s with a small part in the film From Here to Eternity and on the hype of Ernie Ford’s successful version of “Sixteen Tons.” His good friend Hank Thompson also kept him busy in the studio, although not on the road. The 60s didn’t look much better. Travis kicked them off with a narcotics arrest. Country radio and fandom all but forgot him by 1965.

Luckily, in 1968, Merle moved to Nashville at the behest of Chet Atkins, and his luck began to change. Travis and Atkins recorded an album together — The Atkins-Travis Travelling Show — that won a Grammy for Best Traditional Folk Album. Travis quit drinking and began recording again in earnest. The Nitty Gritty Dirt Band even featured him on their ground-breaking album Will the Circle Be Unbroken, introducing him to another generation of traditional and New Grass pickers. He signed with CHD records in 1976 and his most prolific studio years followed. He was up for his second Grammy in 1983 when he died of a massive heart attack. By all accounts, he died a happy man, having overcome his struggles.

Although Merle Travis’s commercial success never matched his influence, he left an indelible mark on country music. You can hear it coming through Chet Atkins in the Nashville Sound of the '60s. His imprint is in Scotty Moore’s biting solos on Elvis Presley’s records. His clear tone is in George Harrison’s weeping guitar. Perhaps the most fitting homage to such a profound musician is that two other country music greats, Merle Watson and Glen Travis Campbell, were named in his honor. You may not know the name Merle Travis, but all your favorite musicians do.