Mile Twelve Bring a Modern View to ‘City on a Hill’ 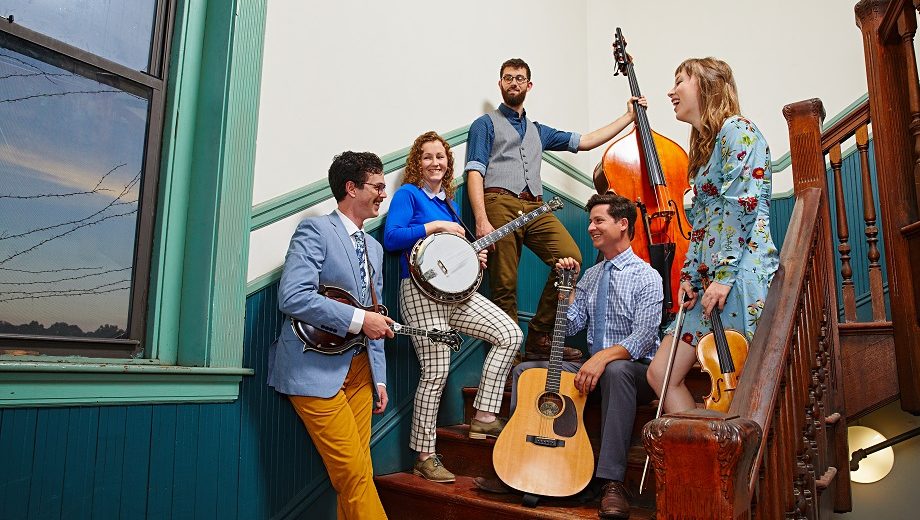 Of the many things bluegrass has been celebrated for, thought-provoking themes of social commentary are not high on the list. But that isn’t stopping Mile Twelve. With their second album, City on a Hill, these rising stars filter current events through the timeless lens of traditional American music.

Composed of David Benedict (mandolin), Catherine “BB” Bowness (banjo), Bronwyn Keith-Hynes (fiddle), Evan Murphy (acoustic guitar) and Nate Sabat (bass), the Boston-founded band have already won three IBMA Momentum Awards between them to signify the respect they’ve earned in the genre’s mainstream. But for City On a Hill they’re taking a bold – perhaps risky – step up to the mic, and they’ve gained a powerful ally to do so: guitar great Bryan Sutton, who produced the album.

“I hope fans hear something they haven’t heard before,” Sabat says of the project. “Whether it’s the content of the songs or the arrangements, or just the essence of who we are, all of us feel like this record is our voice in a way our past records have not been able to express – because we were too young to do that yet. Mile Twelve is here, it’s something new, and I hope people will hear that.”

Mixing crisp-yet-rich bluegrass sonics with challenging narratives courtesy of Murphy and Sabat — plus a few choice covers — City on a Hill rises to the occasion of modern politics. With a clear point of view, it engages listeners on even the most divisive of topics, yet does so without patronizing or taking cheap shots. “Innocent Again,” for example, addresses the stigma that comes with a criminal conviction – even after the time has been served. “City That Drowned” uses metaphor to imagine the effects of sea level rise. “Jericho” applies Biblical wisdom to military veterans struggling with PTSD, and “Liberty” stirs memories of Jewish refugees fleeing war-torn Europe.

Four of the band’s five members spoke with The Bluegrass Situation by phone, helping to navigate the challenging intersection of bluegrass and politics found on City on a Hill.

BGS: Your band is known for a mix of progressive attitude and reverence for tradition. Where does the sound land for City on a Hill?

BB: I think it depends on your view. Like, if you’re in New York City, this album might sound really traditional to you. But maybe for Nashville or something it might sound more progressive. It’s definitely a mix.

Is that a change?

Bronwyn: I think you can hear the tradition in our solos. Instrumentally, a lot of us are coming from a really rooted, bluegrass playing style, so our solos comes across as very bluegrass.

Nate: Yeah, I think what’s progressive about this record is the content – what the songs are about. A lot of it is not what you would traditionally hear in a bluegrass song. I think by and large, it sounds like bluegrass … until you listen to the words.

There’s definitely some serious social commentary on the album. Do you think bluegrass and politics mix well?

Nate: That’s a tough question. I feel like human beings and bluegrass mix well together, maybe that’s a better way to put it. What we’re trying to do with this album is just tell stories, and whatever message people see in it is up to them, because we have our own version of what we see. That’s the reality of politics in this country. People see what they want to see, and it’s hard to change minds.

BB: Also, we never sat down like, “Let’s write a political song.” I think it was always centered around the story.

David: Even inside the band, we all have varying political views and might not always be on the same page. So with these songs we’re not trying to beat anyone over the head or make it be a political mantra. It’s just trying to tell stories of real situations that aren’t right, or things that are troubling and need addressing.

With that as your reference point, do you feel optimistic about where culture is at?

BB: Depends on the day. (laughs)

Nate: I feel like the conversation has been started, thanks to the 2016 election. People are talking more than ever before, but I don’t know. I am interested in what’s happening, and I’m engaged in a way that I wasn’t before, so that’s good.

Tell me about “City That Drowned” — is it about climate change?

Nate: Speaking for Evan, who wrote it, I definitely think it’s about climate change. We don’t actually say those words, but the story holds true and it’s a foreboding tale of what could happen to a number of cities around the world in the next 50 to 100 years, with coastal flooding and all that. But instead of talking about coastal flooding, we’re talking about a son who’s been displaced from his father’s home and feeling lost. But some people might hear it and be like, “That’s just a cool fable.”

It’s interesting you’ve mentioned fables, because when somebody says “Jericho,” you immediately think of Biblical stories. How does that tie in with this idea of what military vets are going through?

David: This is another one of Evan’s, and it was one of the first ones we came up with for the album. It started as a song about PTSD and this feeling of being pushed to do something this guy didn’t want to do, but it wasn’t quite coming across, and the biblical story of Jericho was also tied in. So, Evan spent some more time with it and came back with the version we have now, which I thought elevated it to a new level.

It ties in this story from the Bible about conquest and mission and purpose and being part of a higher calling, but also a sense of brokenness that comes along with destruction, and how duty can sometimes have a weight to it that’s strong enough to break you apart. I think Evan did a lot of research and has some friends who went through difficult things related to wartime, and he was sort of putting himself in that story even though he’s not experienced it himself. It connects with people in a way that some of our others don’t.

What about “Liberty”? It’s very interesting timing because this is a story about Jewish American immigrants, but do you see any parallel between that and what’s happening today with Trump’s border wall?

Nate: Yeah, that’s the reason I wrote it. [Laughs] It’s interesting because we were getting into this stuff with another band last weekend, and we have different views but even they were saying everyone is very open to the idea of legal immigration. People want it to be accessible, but the reason I wrote this is just to ask people who don’t think about it often to reflect on their own path. We perform for people of European descent almost 100 percent of the time – people who came here in search of a home. That’s my family, and everybody in the band except for BB, she’s from New Zealand. So it’s definitely a parallel.

Do you feel like the points of view you’re expressing set you apart in the bluegrass world? Like, do you ever worry about crowds throwing bottles at you?

Bronwyn: I think it’s a diverse group of people in the genre now, but I don’t know a lot of other bands who are doing songs about social issues. That said, we’ve played these songs for some very seemingly conservative audiences and festivals in the South, and they come off well.

BB: Yeah, and it’s not like we introduce them like, “This is an immigration song!” We’re just like, “This is a story, here’s another song we wrote.” I think it matters how you present it, and we try to play shows that bring people together instead of dividing them.

David: That’s what I love about what Nate and Evan have done with these songs – they’re not really divisive in nature. You can really disagree with the content of the song and they still don’t feel antagonistic or preachy, anything like that. It just starts a conversation, and we’ve gotten to connect with people from all types of backgrounds because of that.