‘Miss You Like Hell’ Explores Folk Music in Theater 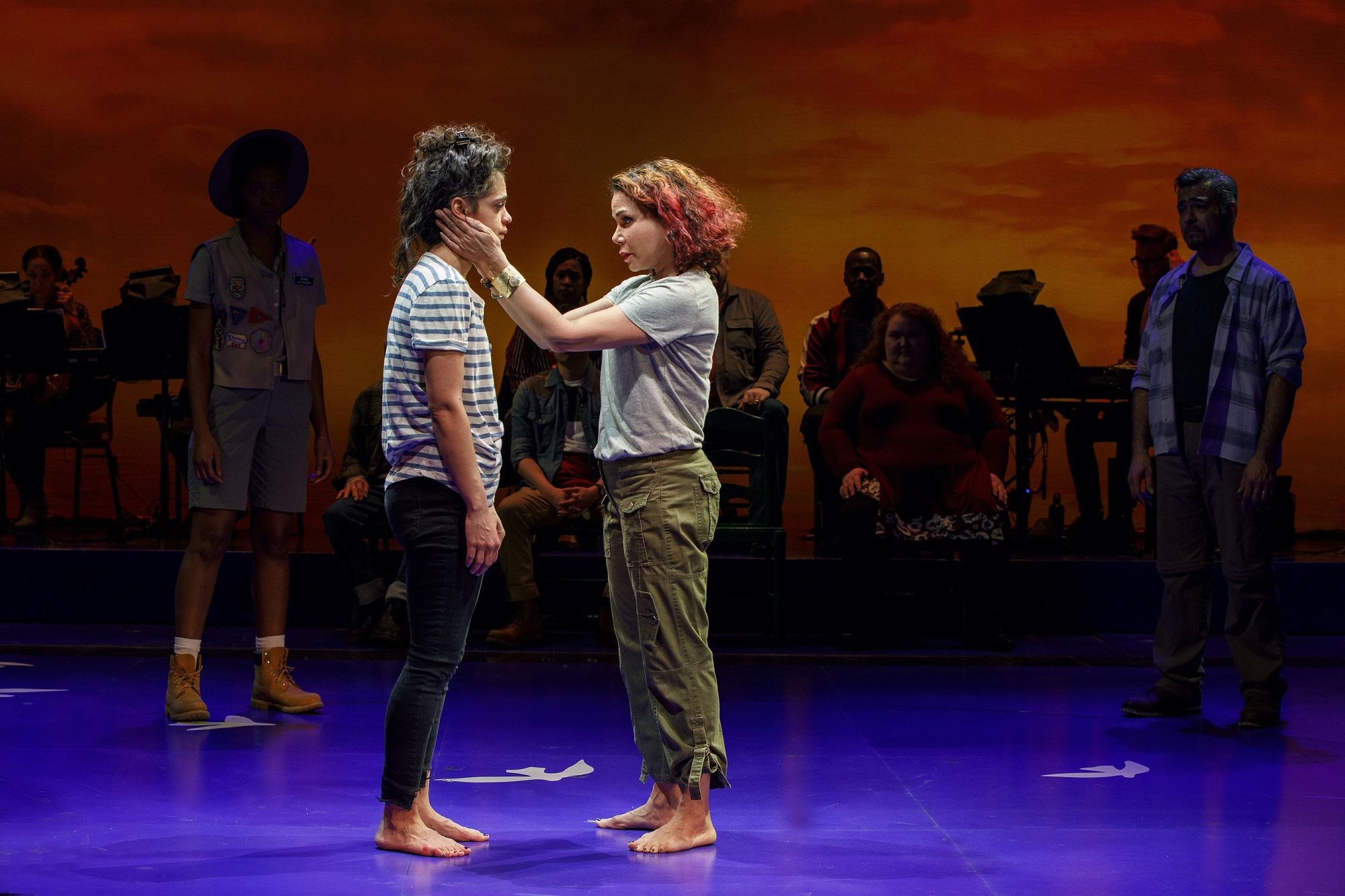 For the past 20 years, I’ve been working in the folk and roots music world in one way or another, and all the while I’ve been fascinated by the slow creep of folk music into musical theater, my other great love. At first it seemed an odd and exciting pairing was popping up—composers employing folk forms, from rap to banjo tunes, to compel their stories forward. But then I remembered Porgy and Bess, George Gershwin’s great folk opera from 1935, and realized that, like all folk things, this pairing has long come and gone from popularity in waves across time.

I was thinking of all of this during a visit last week to New York City’s Public Theater where I took in the musical Miss You Like Hell with a score composed by roots music shapeshifter/songwriter Erin McKeown.

Roots music, like all art, is about telling stories. In folk music especially, many of those stories tend to be old, even ancient, and are updated, intertwined with contemporary ideas. Consider the deeply mythological ballads of James Child, the 19th Century English folklorist whose collection helped define the “folk revival” of a century later when those songs were reinterpreted and popularized by artists like Fairport Convention.

More recently, these myths were adapted by New York City-based folksinger Anaïs Mitchell on her 2013 recording Child Ballads. The concept of reinterpreting mythology was not new to Mitchell, however. She wrote her own folk opera, Hadestown, based on the ancient Greek myth of Orpheus and Eurydice. She released it as an album in 2010 with collaborators Ani DiFranco, Justin Vernon, and Greg Brown. Originally it was a small community theater piece in Mitchell’s native Vermont; it moved back to the stage after the album was complete, premiering at the New York Theater Workshop in 2016. It is preparing for a Broadway debut next year.

Indeed, more and more musicians who have been influenced by traditional roots music forms have been exploring the way their craft can translate in the theater world. Mitchell’s accomplishment is notable, and MacArthur Grant winner and singer-songwriter Rhiannon Giddens is rumored to be working on a musical theater piece about an 1898 protest and race riot in Wilmington, North Carolina. And then there’s McKeown’s Miss You Like Hell, whose book was written by Pulitzer Prize-winning playwright Quiara Alegría Hudes. All three, with their use of quintessentially American music forms, draw easy and obvious comparisons to Hamilton: An American Musical, which tells a centuries-old story of revolution through the modern folk vernacular of various rap styles as well as other truly American music forms like jazz, R&B, and straight-up Broadway numbers.

Its composer Lin Manuel-Miranda grew up listening to Broadway cast albums as he was rapping and writing songs in New York’s Inwood neighborhood. Later, he wrote about the Washington Heights neighborhood using traditional Latinx music forms and hip-hop for In the Heights (on which he collaborated with Hudes), then won a Tony Award for it. Hamilton followed a few years later, incidentally also making its debut downtown at the Public Theater. 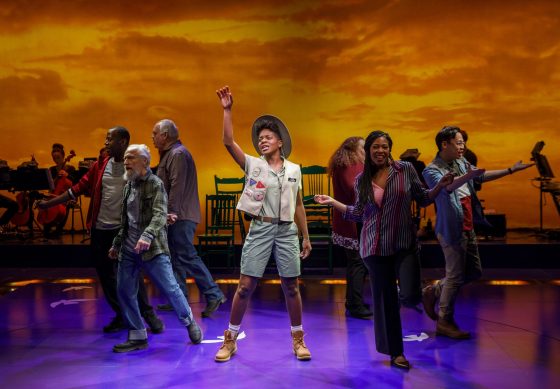 The Public is an institution in the East Village, having been founded in 1954 by the Shakespeare Workshop (Shakespeare, it’s worth noting, also repurposed several old folk tales and images). The physical location opened 20 years later with the debut of Hair, which employed the language of the common people to tell a modern story. Hair is now celebrating a half-century on Broadway, with a musical score that includes songs one could easily imagine being covered by rootsy pop bands like the Lumineers or The Head and The Heart.

Every “rock opera” from Hamilton to Rent and beyond owes a debt to Hair, which marched into the Village 51 years ago in a swirl of sex, profanity, and cultural revolution, speaking for people who were desperate to be heard. Before Hair, the American musical was somewhat of a fantasy world, where pretty feminine girls and masculine men (most of them white) sang at each other about how they planned to navigate their traditional binary gender roles, with a tap number thrown in here and there for good measure. There were exceptions, of course, but Hair shoved the musical theater world in daring new directions. It grappled with war and peace, tradition and revolution, coming of age through sex, drugs, nudity, and free love. Was this generation going to toe the line or was it going to upset the balance through protest and radical peace? Suddenly these questions were fodder for the musical theater, a fact which deliberately made some uncomfortable.

That dramatic discomfort was also present in the quietest, tensest moments of Miss You Like Hell. The story is based on The Odyssey, as a mother (Beatriz) and daughter (Olivia) make their way from Philadelphia to Los Angeles over the course of seven days. Beatriz was a recent Mexican immigrant when she met Olivia’s white American father, fell in love, and had a child. Life happened, and years passed as Beatriz tried navigating the complex immigration system. Her relationship with Olivia’s father broke up and a custody battle ensued. Terrified of deportation, Beatriz bailed to avoid the courtroom while Olivia, unaware of her mother’s status, was left to believe Beatriz just didn’t care enough.

Now broken and depressed, Olivia writes in her blog with cries for help and contemplation of suicide. Heartsick for her daughter, Beatriz reads Olivia’s posts, borrows a neighbor’s truck, and drives to Philly to be a mother to her daughter. On their road trip back to LA for Beatriz’s immigration hearing, the pair comes to realize the truth of their stories, clawing through layers of digital addiction, depression, mother-daughter issues, and Beatriz’s realistic and desperate fear of ICE. 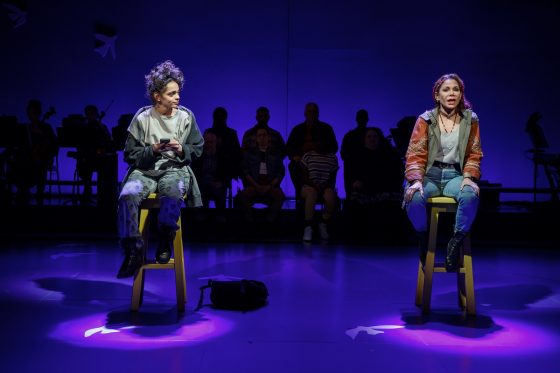 Gizel Jiménez and Daphne Rubin-Vega in ‘Miss You Like Hell.’ Photo by Joan Marcus

It’s intense, yet made exquisitely human by Daphne Rubin-Vega, who played Mimi in the original cast of Rent, and Gizel Jiménez, who has portrayed Vanessa in In the Heights and Eurydice in Hadestown.

McKeown’s rootsy score moves things along, if not always as smoothly as other comparable musicals of recent years. Rubin-Vega and Jimenez’s voices are beautiful, well-oiled machines, ready for all the roots styles McKeown throws at them. But, as The New York Times also noted, the songs don’t “do the heavy work asked of them.”

McKeown is one of roots music’s most gifted songwriters, capable in any subgenre she chooses. She unleashes all of them here, from the Shawn Colvin-like singer-songwriter vibe of “Mothers” to the story song “Tamales,” as well as the groovy R&B-with-finger-snaps vibe of “Yellowstone,” and a tip of the hat to John Prine and Iris DeMent with “My Bell’s Been Rung.” Though each is well-composed and well-sung, and some are reprised in the second half, what’s missing is a unifying force that metamorphoses them from just a group of songs to a musical theater piece.

The show still managed to tug at my emotional core, hard—perhaps the recent ICE raids back home in Asheville (as everywhere) or the omnipresence of opinion on immigration policy on Twitter have something to do with that—but I left Miss You Like Hell wanting that one song that pulled it all together, as “Seasons of Love” does in Rent.

As I walked away from the Public through the late-night bustle of East Villagers just gearing up for their Friday night out, I thought about the delicate nature of creating art. How one misplaced note or phrase in a song can change everything; how one missing song can make a musical fall short. That doesn’t mean what’s there is subpar, only that the work needs more time and space to grow into a final musical thesis statement.

It’s something all creators know well, something we interviewers always ask: “How do you know a piece is done?” You just know. That’s the only answer. Miss You Like Hell didn’t feel done, but I hope they find that one song, that one scene. Because the heart of this show—this manifestation of roots music and storytelling, this human story of the way love and family are impacted by public policy—is something we need to see and hear right now.

Lede image: Gizel Jiménez and Daphne Rubin-Vega in ‘Miss You Like Hell.’ Photo by Joan Marcus