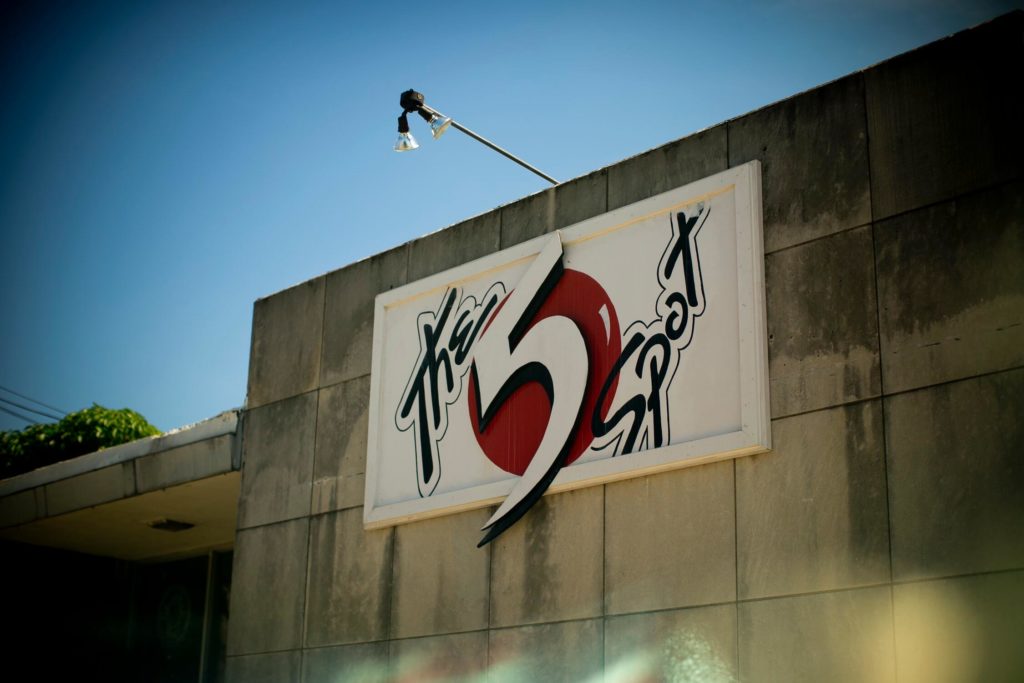 Back in 2010, the 5 Spot in Nashville was known for two things — the Monday night dance party and the Wednesday night Old Time Jam. They were both very popular weekly events.
But Tuesdays were a dead zone. Either the venue was closed or a haphazard show or writer’s night was thrown together. Most of the time it was just me and a few other local musicians hanging out at the bar.

So, I tried to think of a way to get those people on stage and do something fun, without making it a big deal. Take the “business” out of the music business. It took a while to catch on, but over time, we all started having fun with the opportunity to play music with zero pressure.

The key was to do this every week. I booked five acts who each got to play five songs each. I tried focusing on booking a diverse set of acts — I really wanted it to be a variety of styles. That was the hard part. I had to get new people involved. I had to get musicians to come to the 5 Spot to play a few songs for no money and a very small audience. So I made it about the neighborhood: East Nashville. It was something for “us.” I had to get people to think about it like a live rehearsal for their new band — a place to try out some new tunes — and it had to be fun. I’d play a set every week with my newly formed band and act as emcee. Co-owner Todd Sherwood and I came up with the name “$2 Tuesday.” Local brewery Yazoo got on board as a sponsor, and we were off and running. I saw it as an East Nashville night club act that happened every week.

Who’s on the bill doesn’t matter. $2 Tuesday is the show. There’s no opener and no headliner. I just want the music to be good. Now that we can charge $2 at the door, I can pay everyone a little something for their time and talent. That feels good.

Two things eventually happened that solidified the format of each Tuesday: A band called the Clones (now Los Colognes) moved to town and started playing a lot of late-night sets on Tuesdays. Also, my friend Tim Hibbs brought his turntables to play records in between acts. Now I had an Ed McMahon to my Johnny Carson …

The first few years saw acts like Corey Chisel (who was living in Nashville at the time) and a virtually unknown Jason Isbell play some tunes. Peter Buck of R.E.M. sat in on bass one night. The newly termed “Late Night” slot gave an opportunity for longer sets. Folks like Hayes Carll would take that slot to run through a tour set. Shovels & Rope packed the place for a sneak peak of their new material. Over the years, we’ve hosted Nikki Lane, Sunday Valley (Sturgill Simpson), Bobby Bare Jr., Nicole Atkins, Lydia Loveless, All Them Witches, Lloyd Cole, Robyn Hitchcock, Margo Price, and on and on. All of this done without posters or fanfare. No Facebook invites or business contracts. Just word of mouth. A “you had to be there” type of show. Tuesdays have become a night to get turned on to new music of all kinds. Songwriters from all over the country, bluegrass acts, touring and local rock bands looking for a show. We’ve even had hip-hop and comedy acts. That’s what I’ve always loved about Tuesdays. It’s just this little thing that grew into something really special. All of this for just two bucks.

People from all over the world have come to $2 Tuesdays at The 5 Spot. I never imagined that. When I travel to other cities, people there have heard of it. It still blows my mind. Each week, with a big smile on my face, I ask the audience, “Are you getting your $2 worth?” After seven years, I’d say the answer is, “Yes.” — Derek Hoke

Cory lived in Nashville for a short time. Couch surfing in between tours. He came by $2 Tuesday to show us all how it’s really done. Still one of my favorite songs.

I was working with Jason’s manager at the time. She brought him by a $2 Tuesday, and I asked him if he’d like to do a couple of tunes. Pretty sure the bartender was the only other person that knew who he was. A couple of years later, the whole world would know.

Before she was “Margo Price,” she and her husband Jeremy were rocking soulful tunes like this one. This song really floored me the first time I heard it. Powerful. Margo was (and still is) part of the little 5 Spot crew that makes the East Nashville music scene so special.

I first met Cary Ann Hearst at a $2 Tuesday. We were talking about South Carolina, where I’m from. Had no idea she lived in Charleston. I thought she lived down the street! Little did I know that Charleston had a killer burgeoning music scene going on. They played the Late Night slot a few weeks later. Still one of the best sets I’ve ever seen. So much beauty and soul. You wouldn’t think just two people could make a sound so strong.

Robyn Hitchcock — “Somebody to Break Your Heart”

First time I ever did a double take at $2 Tuesday was when Robyn walked in. He’s just so unmistakably “Robyn Hitchcock.” I grew up listening to his records. He’d come by and sit in with bands. Do some Dylan tunes. My band and I would back him on some Elvis stuff. He’d do his own tunes. He quickly became a fixture around the neighborhood. Now I see him at the coffee shop down the street all the time. Always makes my day. Such a unique talent and very kind person. East Nashville is lucky to have him.

Another blast from my musical past. Lloyd came on board via $2 Tuesday DJ Tim Hibbs. Lloyd had been on Tim’s radio show earlier that day and he asked him to stop by. We all had the pleasure of hearing him play some new tunes, as well as guest DJing the night. A very memorable evening.

The Wild Feathers — “If You Don’t Love Me”

Ricky Young is one of the most talented people I know. In typical music biz fashion, he would sell out the Exit/In, then two months later be waiting tables again. Then he went to California. When he came back, he brought the Wild Feathers with him. Sweet harmonies and killer tunes. They played $2 Tuesday before their debut record was released. Great live band. And great guys, too.

Los Colognes — “Working Together”
When they moved from Chicago to East Nashville, they were calling themselves the Clones. A group of super-talented and endearing dudes, they quickly became a $2 Tuesday staple. Playing the Late Night sets and garnering attention. Their brand of bluesy rock ‘n’ roll was just what this singer/songwriter town needed. A breath of fresh air.

Nicole Atkins — “If I Could”
Nicole’s backing band consists of a lot of former 5 Spot employees. That goes for numerous other acts, too, now that I think about it. Nicole kind of has it all. Great singer, wonderful performer, and an amazing songwriter. She put on a stellar show for her $2 Tuesday Late Night set.

Hayes Carll — “Hard Out Here”
Hayes was in town writing for his new record, at the time. He was also getting ready for a tour. His band met him in East Nashville, and they put on a killer set at $2 Tuesday for those lucky enough to be there that night.