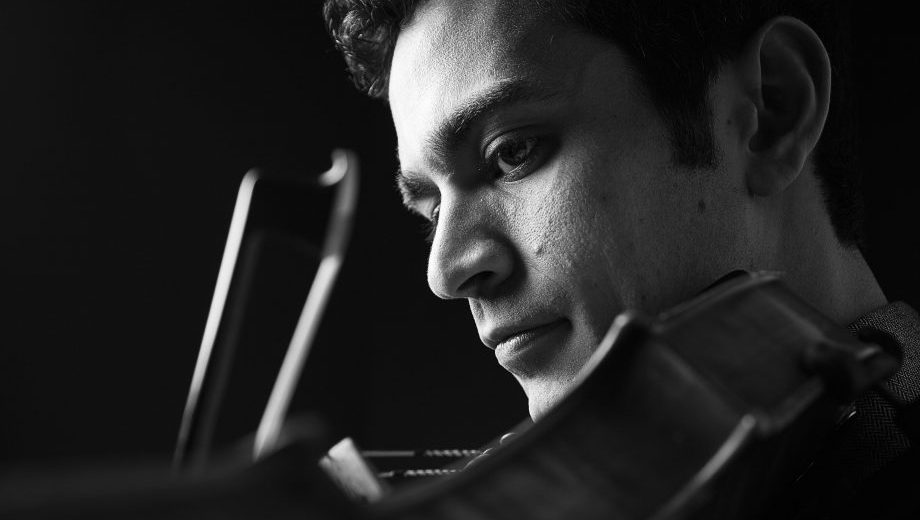 Records from John Hartford like Wild Hog in the Red Brush and Speed of the Old Long Bow got me really excited about the energy in old-time music. I never got to meet Hartford, but feel a connection to him through his music. He brings a special vibe that I’ve often tried to channel. I’ve heard stories that he used to have a guideline that nobody in his band could repeat their accompaniment/part for more than one section of a song, everyone had to mix up their playing often, which gives his music a certain drive and breath.

When I heard Johnny Gimble play at Mark O’Connor’s camp maybe 14 years ago, it was so strikingly Texas, so rooted in that tradition. I particularly remember his feel when playing Texas rags captivating me, like here in the “Black and White Rag.” Johnny helped me understand more deeply the true spirit and community of Texas-style music.

Vassar Clements invented his own, incredibly unique style of fiddling. The vibrato, silky tone, double stops and slides … it’s like magic whenever he touches the fiddle, and I can tell within two notes if it’s him. This recording of “Bound to Ride” is a great snapshot into Vassar’s unique way of playing around a melody, backing up the vocal, and lifting the energy of a song.

Buddy Spicher is one of the legends, and one of those fiddlers you’ve probably heard but maybe didn’t know it was him. It was Buddy who got me wanting to play second fiddle — the harmony. This recording of Buddy with Vassar on “Dill Pickle Rag” shows some of Buddy’s genius and virtuosity (and Vassar’s!).

Hard not to mention Kenny Baker here. I listened to his album Kenny Baker Plays Bill Monroe frequently growing up, and I’m still trying to understand those bowings! His playing is so clean, clear, good tone and time, and great melody player.

“Sally Goodin'” was actually the first COUNTRY hit! #funfact It was Tony Trischka who got me listening to Paul Warren when I was about 17. Another one of the legends in bluegrass fiddle, Paul brings a grit and edge that is often lost in modern bluegrass fiddling.

Once Bill Monroe was asked if he had a favorite fiddler of those who’d played in his band. Bill said, “I’ve had a lot of fiddlers come through my band, but I believe Bobby Hicks was the truest fiddler I ever had.” Bobby is the double-stop king, and took a lot from what Tommy Jackson did with his single note playing around a vocal and made it his own.

“Back Up and Push” – “Benny Martin

Benny Martin’s double stops, attack, and full-throttle style really resonate with me. The tone he gets in this version of “Back Up and Push” makes it seem as if he’s got a brick tied to the end of his bow. And when he gets to the shuffle, it’s clear that so many contemporary fiddlers have been heavily influenced by how he did it.

If you’re wondering who ever had the most fun playing the fiddle, all you need to do is search “Curly Ray Cline Orange Blossom Special” on YouTube, and you’ll find that it was in fact Curly Ray Cline! He’s most known for his work with the Lonesome Pine Fiddlers and Ralph Stanley and is as much a treat to watch as to listen to. I love his note choice and where he plays in the beat — what he does with the time.

“Fire in the Mountain” – Scotty Stoneman and Bill Emerson

Scotty Stoneman was a wild man of a fiddler. His double stops and slides, and aggressive approach to the fiddle, are some things I’ve always gone and checked back in with in my listening. You can hear some of what I’m talking about with Scotty’s sound in the recording of him playing “Fire in the Mountain.”

The Del McCoury Band is one of the finest — if not THE finest — bluegrass bands still in the business. One G run from Del will set you straight for the whole year. Jason Carter has got the old bluegrass sound, and I love how much he digs in and goes for stuff, and pulls so much sound and soul out of the fiddle.

I’ve always loved this recording Bruce Molsky made with Rushad Eggleston, Darol Anger, and Michael Ducé of “Pickin the Devil’s Eye.” The groove masters! Or maestros! Bruce’s propulsive bowing, groove, and reverence for tradition is really remarkable. He’s basically a one man band, and hearing him here is transcendent.

Stuart Duncan has played on countless recordings so it was hard to choose just one, but Béla Fleck’s Bluegrass Sessions was one of the most influential for me, and a major landmark in acoustic music. “Buffalo Nickel” is gorgeous, and Stuart plays the melody with so much taste, tone, feel, soul, intonation … all the good things. To me, Stuart has always been sort of a perfect combination of all the things I love about fiddling.

Mark O’Connor is one of the most versatile players on the planet, combining so many styles and influences so flawlessly to create his own incredible voice. Telluride Sessions by Strength in Numbers is another must-have album. The way everyone plays together, and Mark’s precision and virtuosity … amazing. His solo here on “Future Man” is a highlight — a glimpse of what Mark is capable of.

“Ducks in the Millpond” – Aubrey Haynie

Aubrey Haynie is the initial reason why I got into bluegrass. His sound made me want to learn how to do that. One of my favorite fiddle albums out there is Aubrey’s The Bluegrass Fiddle Album. I like this cut of “Ducks on the Millpond” — a really cool instrumental that weaves between three sections. Aubrey mostly plays the melody with so much tone and taste, and varies it slightly toward the end.

Not everyone is familiar with the fiddle stylings of Billy Contreras, as his genius is less substantially documented. I think he is the greatest improviser on the violin to ever live, and a master when it comes to bluegrass, swing, modern jazz… he can do it all. His brilliant, almost mathematical mind for music, combined with his deep heart for it all, is endlessly inspiring.

Growing up, I listened to so much music that Darol Anger is responsible for: Republic of Strings, duo with Mike Marshall, his own projects, his work with the David Grisman Quintet, etc. Besides his amazing lead playing, he is known for paving new roads for the violin as a rhythm instrument with his infectious groove and development of the fiddle chop. His album, Diary of a Fiddler, has so many thoughtful duets with great fiddlers of different styles.

Matt Glaser, who turned me onto so much priceless music during my time at Berklee College of Music, introduced me to Stuff Smith. I love Stuff’s emphasis on groove and blues, and the grit and directness in his sound.