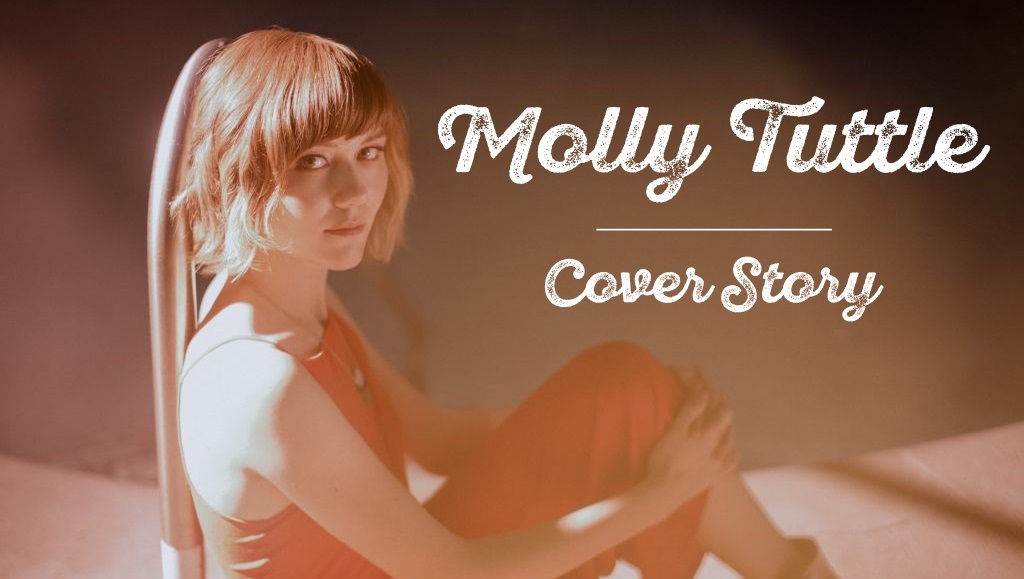 Even before releasing her first full-length album, Molly Tuttle made history. She became the first woman to be named IBMA Guitar Player of the Year, a title she’s won twice, in addition to winning Americana Music Association’s Instrumentalist of the Year, all on the strength of her 2017 EP, RISE. But to focus exclusively on Tuttle as a guitarist would be a mistake. She isn’t interpreting others’ songs. She’s writing and singing her own, and as her debut record When You’re Ready proves, she’s doing it not only with classically trained musicianship, but with an exciting willingness to explore and trust her own wide-ranging artistic instincts.

Tuttle talked with BGS about When You’re Ready, feeling optimistic about women in music, and why California’s Bay Area has her heart.

BGS: When You’re Ready is such a confident debut. Were you feeling confident from the jump, or did your confidence grow as you recorded?

Tuttle: I think it grew. As I was writing the songs, I got more and more confident just saying what I felt and what I was thinking in the songs. I remember feeling really confident in the studio in what I was saying and in the parts I was playing. Ryan Hewitt, who produced it, helped me feel confident. He wanted everything to sound really strong – it was a good experience.

A lot of these songs seem to explore relationships and how we interact with each other. Do you feel like there are some currents that run through thematically and connect all of these songs?

I think there’s kind of a theme of longing on the album, and also a theme of just being confident in who you are and what you’re feeling. When I was writing it, it was, “I’m just going to say where I’m at.” The theme on the album for me would be accepting your feelings and embracing them.

You’re from California, then you went to college in Boston, and now you’re living in Nashville. Do you feel like all of that geographic diversity changed the trajectory of your music?

I think so. I got exposed to lots of different kinds of music in California, and then especially when I was at Berklee, there were all sorts of different kinds of music going on all the time at school. Then, obviously, Nashville is one of the most amazing music cities in the world. I think living in California was influential, growing up there. I really relate to the Bay Area and a lot of my songs are still inspired by California. It’s where my soul is, still.

What is it about the Bay Area you love so much?

I really love the ocean. I love the nature there, the scenery. I think people are really open there. Everyone — well, not everyone, but a lot of people in the Bay — are just trying to be good people and trying to be accepting of other people. That was something I was taught in school a lot as a kid: that you should accept everyone as they are. Of course, nobody is perfect at that. But I think people are trying to do that there, and that’s a feeling I’ve tried to carry with me.

When you write, are you focusing on the guitar part first and then the lyrics, or does it vary?

There are times when I do the guitar part first, but for this album, I was really focusing on the lyrics and melodies. The guitar parts were the last parts that came with these songs — and I really wanted to have interesting guitar parts on this album. I thought it’d make it more interesting to have a singer/songwriter record with guitar lines that could weave it all together, so I worked on that after I finished writing the songs.

The guitar playing on “Take the Journey” jumps out: the percussion, the lead, the bass, the counter-melodies — that’s all you on acoustic guitar. How’d you come up with this song?

I wrote that with Sarah Siskind. We wrote it pretty quickly in a couple of hours, which for me is quick for writing a song. We had a song that was in that modal-key feel — you don’t really know if it’s major or minor. When we were writing it, I went into this different tuning: it’s an open G tuning, but you get rid of the third and tune the B up to C, which makes it like a Gsus4.

I like that style of guitar playing. When I was a teenager, I learned clawhammer banjo because I really liked old-time music. Someone showed me that you could move the clawhammer style onto the guitar and play a really percussive-sounding style. I went with that and created different rhythms that I like to use — more syncopated — and really worked on getting the bass notes to pop out, letting my hand hit the guitar so it’s percussive sounding.

Your vocals on “Don’t Let Go” move between smooth and comfortable verses to more of a staccato and breathy chorus. How’d you decide to approach the vocals this way?

Where the melody is in my range, I naturally had to go up to a breathy head voice, so we thought that could be a really cool thing, to make it sound really emotional. And on this one, when I was singing the chorus, I did get really emotional in the studio. That helped me get the quivers in my voice. I think you can hear it in the track. There are little things that came out in my singing that I hadn’t really done before recording this. I had to go to an emotional place to get the take that worked.

Do you have a favorite song on here or is that impossible?

I think my favorite is “Sleepwalking.”

All of that imagery on “Sleepwalking” – and on some other songs too – blurry screens, white noise, and even sleepwalking itself: it’s such a direct contrast to the specific, refined sounds you’re making. What is it about the hazy imagery that you’re drawn to?

Yeah, I think a lot of my songs have themes of trying to make a connection with a person or a place or a feeling. There are a few songs that talk about white noise or static or anything that’s kind of blurring the connection. That’s something I feel — like with technology, sometimes it makes me feel like I’m not actually connected to anything and not connected to myself.

I think that comes through in my songs. “Sleepwalking” is a song I wrote about that specific feeling of being disconnected from the world around you. Maybe you’re relying on one person or one place or feeling to be your connection. It’s kind of a love song, but it’s kind of a cry for help in a way. [Laughs]

Of the women who are widely known first as guitar players – a number that’s still too low – most aren’t acoustic, steel-string players. It’s also a physically demanding instrument, especially the way you play. Why were you drawn to it? Why do you think you’ve succeeded?

I’ve never really seen limitations on guitar for me as a woman. I remember, I was first drawn to it in a really natural way when I was a kid. I just liked the mellow sound of it. So I don’t remember specifically what drew me to it, but I remember seeing guitars around, and I told my parents I wanted a guitar. That was after I’d tried like three different instruments and failed at all of them. [Laughs] I tried to play fiddle, and I think I got tired of just not sounding good on it. Guitar is a lot less abrasive when you’re first starting out. I had a tiny guitar when I started, and my dad showed me some stuff on it.

I really liked that you could play it while you were singing. I never thought about it being a physically demanding instrument, even when I first played and my fingers got really sore. It felt pretty natural to me. Then, when I went to Berklee, I was 19 and all of a sudden there were no other women in any of my guitar classes. [Laughs] That was weird. It was definitely an uncomfortable experience at times.

But it was good because I’d walk into class and be the only one, and because all this attention was instantly on me, I thought, “Oh, I better practice and be good or they’re just going to write me off as some girl trying to play guitar.” It felt like there was some added pressure there, which is not really fair, but at least it made me practice more.

You’re not the “best woman guitar player.” You’re the best guitar player. Do you feel like the industry and culture in general are beginning to consider contributions of women more fairly – that you’re weighed equally?

I think it’s definitely changing at a rapid pace right now, especially with the #MeToo movement. Now that’s starting to affect the music world. I’m seeing so many women coming up and their careers are just exploding in new ways – like at the Grammys. There were so many women winning awards and playing.

I think women are feeling really empowered to just say, “No. I’m not a female musician. I’m just a musician.” Women are fully embracing feminism more and just feeling like we can say what’s on our minds. We don’t have to tiptoe around these issues anymore. I think that’s helping everything change. We are not accepting any crap anymore — like “you’re a female guitar player.” [Laughs] I certainly don’t want to be pegged as a female guitar player. My gender doesn’t have anything to do with my guitar playing. We’re talking about the issues more and that’s helping everything to change.