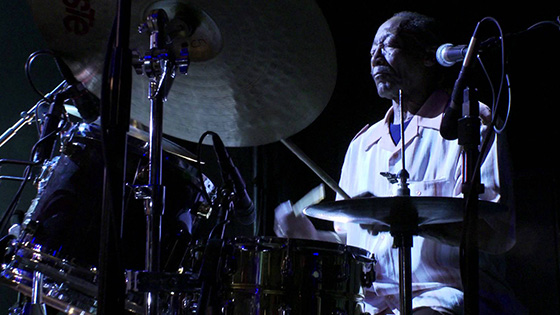 If you're a film junkie, there are likely a few festivals you dream of attending: Sundance, Toronto, Cannes. What you may or may not know is that there are many smaller festivals across the country that are contributing to the film community in valuable ways. One of them is the upcoming Nashville Film Festival.

Founded in 1969, the Nashville Film Festival began as the Sinking Creek Film Celebration, eventually changing its name to the one we know today in 2003. The festival is one of only 17 that funnels winners directly into Academy Award consideration pools (for the Short Documentary, Short Narrative, and Short Animation categories) and was named one of the top five film festivals in the country by the Brooks Institute. The festival has also been celebrated for its diversity, as awards categories include Best LGBT Film, Best Film by a Black Filmmaker, and Best Hispanic Film.

"It's one of the most vital things that we do," says Brian Owens, the festival's Artistic Director, of curating a diverse lineup. "With the number of entries we get and the number of films that we show, I think it's an inherent requirement that the selection be as close as possible. So we do pay close attention. We want to hear from not just different parts of our community, but women, minorities, the LGBT community — also, different parts of the world that aren't necessarily heard from. We have an incredible short documentary [Another Kind of Girl] in the festival this year that was shot by a teenage girl who was a refugee from the Syrian civil war and living in Jordan right now. Her voice is not one I think that you would hear on a regular basis. Even if you hear stories about the refugees in the news, you rarely hear directly from them, especially from their own camera, their own perspective."

Owens, who joined the Nashville Film Festival after leaving the Indy Film Fest (which he helped co-found) in 2004, oversees all of the festival's programming, taking great pains to ensure that each year's festival lineup is both diverse in its range of voices and enticing to potential attendees. "I oversee the film selection process from beginning to end, all the way from June to these last couple of weeks where the lineup gets finalized and the information gets gathered," he says. "I oversee that entire process. That includes working to gather in over 5,000 entries and then honing those entries down to the 250 plus films we have at the festival."

While the festival encompasses a wide range of genres and voices, its Music City Competition focuses on — you guessed it — films that shine a light on music.

"It is Nashville, so the music is part of what separates us from others," Owens says. "There's Austin, so there's SXSW and a few other festivals where music plays a big part. I think it's an inherent part of what we do. That's not just the music documentaries in our Music City section, but movies like Sing Street, the Irish musical that's going to be a special presentation this year, so it's a lot more than country, too. Then there's the whole side of the festival that not everyone gets to see, where we have some of the top music supervisors from Hollywood and New York coming in to listen to musicians here that we bring together so that we can help our musicians get placed in future movies and television and commercials, and, of course, in this day and age, video games."

One of those films in the Music City Competition is Sidemen: The Long Road to Glory, a highly anticipated film that tells the story of legendary blues players Pinetop Perkins (piano), Willie "Big Eyes" Smith (drums), and Hubert Sumlin (guitar), all of whom played as sidemen for Howlin' Wolf and Muddy Waters. The film contains some of the last interviews with and performance footage of the players, all of whom passed away (separately) in 2011 while the film was still in production. Their sudden deaths, coupled with the lack of available footage and information about their earlier lives, proved a challenge for the film's team, which was helmed by director Scott Rosenbaum.

Despite setbacks, however, the film still offers an intimate portrait of some of the most important musicians never to see their own names in lights. (One of Rosenbaum's chief goals with the film was, even posthumously, to bring these players the long overdue recognition they so greatly deserved.)

"What's amazing, part of the coming full circle for me, is if you're familiar with The Last Waltz and Muddy's performance there, is that Scorsese has seven cameras, I believe, shooting the film," Rosenbaum says. "Although he had planned the shoot down to the storyboarding and everything, one thing that seemed to go wrong is that when Muddy Waters came out, six of the seven cameras were being reloaded. So there's one single camera angle shooting Muddy Waters and just beyond Muddy Waters was this sort of Bob Dylan-looking, enigmatic figure, which is Muddy's guitarist."

Rosenbaum quickly became interested in that enigmatic figure, as well as all of the other players who worked tirelessly to back men like Waters and Wolf. "I had this amazing opportunity to meet these guys and, when I did and heard their stories in person firsthand, about Muddy Waters, Wolf, John Lee Hooker, even Robert Johnson, who Pinetop Perkins knew personally, it was just, for me, mindblowing," he says. "It was like listening to these Greek gods tell ancient Greek mythology on a firsthand basis. It really was something that I wanted to preserve. It was very clear to me that this was a fleeting part of music history and of American history."

Rosenbaum and his team managed to pull together a Last Waltz-esque performance from the players (along with their contemporary admirers), although he had no idea that the "last" part of that descriptor would end up being so true. "That's what we started to do," he says. "We captured a few of those performances over the years that we were shooting. Unfortunately, in 2011, as you perhaps know, they all passed away within eight months of each other. As an unknown filmmaker, it wasn't like I had the wherewithal to put this giant tribute concert together and get all of these acts to come out on one night. We did a small tour of California in the Spring of 2010 and got some of those pairings then."

Sidemen premiered at SXSW last month and is making its third appearance (after a quick second screening in Louisiana) in Nashville, which Rosenbaum describes as a "perfect" location for the film. After years of ups, downs, and uncertainties, Rosenbaum is also thrilled that the film is getting a release at all.

"That was always the original mission — to preserve their legacies, as well as the music and the artists they represent … not only Wolf and Muddy, but the hundreds and maybe even the thousands of blues artists that people don't even know," he says. "To me, the blues is such an important part of American culture. [The artists] were very vocal in the interviews. You'll see it in the film. In looking at the film and in looking back at the interviews, they definitely had a sense of their mortality. And it was a constant refrain in our conversations that they wanted very much for their music to live on beyond their lives, and that if they achieved anything it would be that they passed it on to the younger guys, and that they keep it going. So when they passed, while it was already a pretty lofty vision and we had some pretty heavy goals in terms of trying to capture these men's lives and their legacies, after they passed it became so much more than just making a film. It was essential. We had to finish this thing for them. It ultimately took seven years, but I'm so thrilled we're at this point and we do have it."

Other films in the Music City Competition include Artist & Repertoire, Colin Hay: Waiting for My Real Life, A Fat Wreck, Honky Tonk Heaven, SHU-DE!, A Song for You: The Austin City Limits Story, Syl Johnson: Any Way the Wind Blows, and What Would Beethoven Do?

Above all, the Nashville Film Festival continues to contribute to the Nashville community and provide a heart for the city's film industry, an industry that's growing just as quickly as the booming city itself. "One of the things that I'm happiest about with this year's lineup is that I do think that the material made in this state — the feature films and the shorts — is the strongest that it's been since I've been here," Owens adds. "There are some really powerful feature films made here, from Rory Feek's debut with his movie Josephine to the movie Soul, a really powerful work. All of the stuff that's been made here locally this year is wonderful. And it has been improving with pretty much each passing year. We're truly making ourselves more than just a music capital; we're making ourselves an entertainment capital, as the talent and the quantity of the people working in the industry continues to grow here in this city."

Lede photo courtesy of Sidemen: The Long Road to Glory