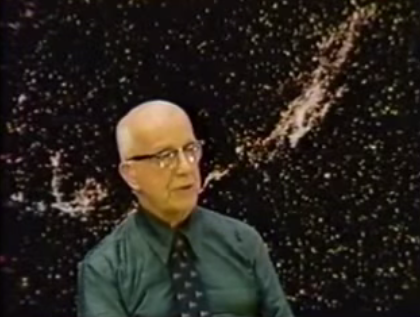 Buckminster Fuller was one of the most interesting figures of the 20th century. The architect, designer, and humanitarian — to name just a sampling of the titles he held throughout his 87 years — innovated everything from transportation, with his Dymaxion car, to architecture, all the while writing prolifically and keeping detailed logs of his day-to-day work and activities.

While there's no shortage of media available on Fuller (he's been the subject of several documentaries and books), there's nothing quite like experiencing something from the man himself, which is why we're excited to have found a whopping 42 hours of Fuller lectures available to stream for free at the Internet Archive. Fuller recorded these lectures — collectively titled Everything I Know — in 1975 as a way of distilling, well, everything he knows — including his invention of World Game and his popularization of geodesic domes like Epcot's Spaceship Earth — into one narrative.

And if videos aren't your thing, you can read transcripts of the lectures — also for free! — right here.

Watch the first four clips, and find the entirety of the series here.

Everything I Know, Part 1

Everything I Know, Part 2

Everything I Know, Part 3

Everything I Know, Part 4