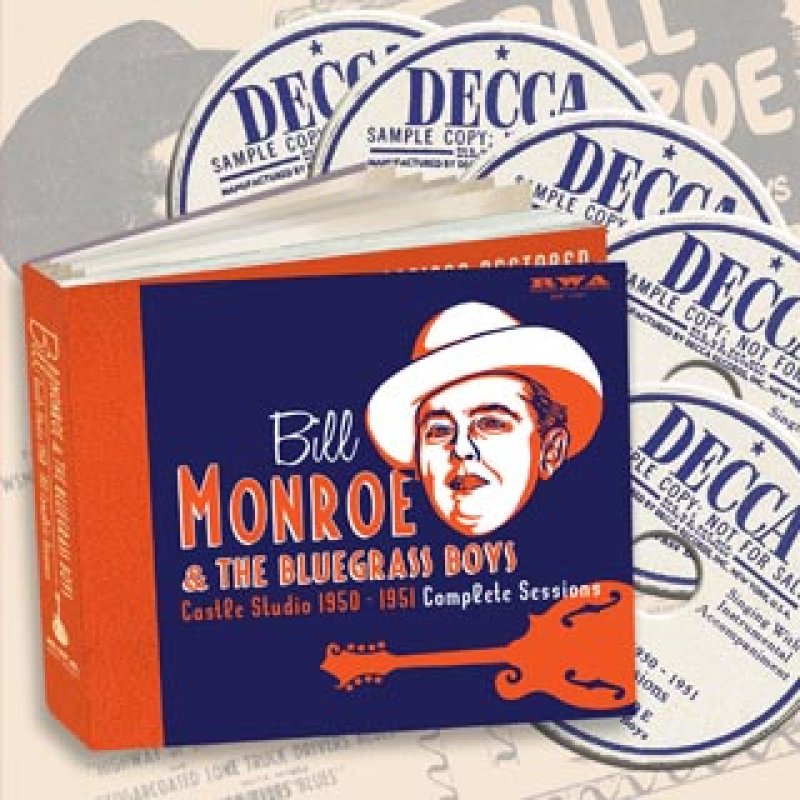 If you’re a Bill Monroe fan, it’s likely that there are few things that excite you more than discovering music from the “Father of Bluegrass” you’ve never heard before. And, thanks to the folks at Richard Weize Archives, there’s a new opportunity to do exactly that.

Released last month, the Castle Studio 1950-1951 five-CD box set features Monroe’s Decca recordings from the years 1950 and 1951, alongside many never-before-heard outtakes, with some tracks like the beloved “Rawhide” featured in six different incarnations. Singers on the project include Jimmy Martin, Carter Stanley, and Edd Mayfield. Of special note is an alternate version of “The First Whipporwhill” that corrects a tape blip found on the commonly available version of the song.

In addition to the CDs — which span a whopping 181 tracks — the set includes a detailed 68-page booklet with a discography by folklorist Dr. Neil Rosenberg, notes from musicologist Dick Spottswood, and anecdotes from Blue Grass Boy fiddler Charlie Smith. The release is limited to 1,000 copies.

“A lot of people told us that there is no market for old-fashioned bluegrass/country music,” the label’s Janice Braband says of the Monroe set. “Probably they are right, but we decided to give it a try. And we are very proud that this box will hit the stores.”

The Richard Weize Archives is the passion project of Weize himself, who left his post as founder of independent German label Bear Family Records to launch RWA Records, a division of Rockstar Records UK. A majority of the releases offered through RWA Records come from Weize’s extensive private archives, ensuring that the releases will be of special interest to collectors and diehard fans. Weize also lends his deep musical knowledge to writing and researching content for detailed liner notes that accompany each release. Other RWA Records projects include releases from Johnny Cymbal, Cab Calloway, and Frankie Miller.