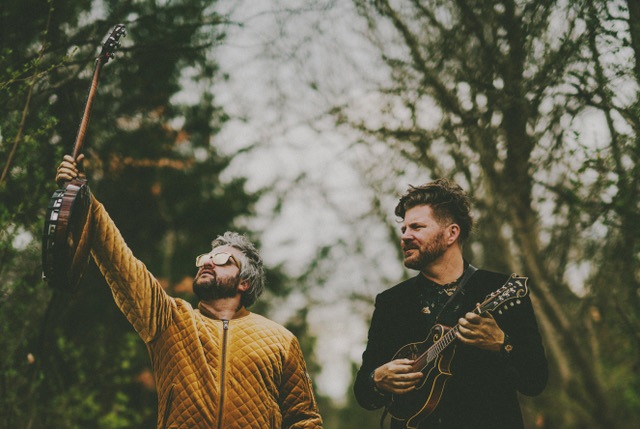 In Their Words: “‘Young Love Don’t Age Well’ seems appropriate as one of the first two songs we release off this new project as The Golden Age. It’s a wild ballad about the fervor of the young at heart: full of conviction, careening carelessly into the cosmos…without the careful calculations of the once wounded. The Golden Age is me and Matt’s chance to return to that feeling before we knew music could be monetized or manipulated into a career; back to that place and time when we first were swept away by music. And while not resurrecting that moment, perhaps reinventing it. Perhaps in hopes of enjoying it a little more this time.

“A last-minute decision to dip our bodies in hot gold, including Matt’s sunglasses, rendered Matt blind to his banjo for the entirety of the song. Surrounded by such otherworldly musicians playing on the song — like Jake Stargell on guitar (on the far left/off-screen), Geoff Saunders on upright, Billy Contreras on fiddle, and Emily Kohavi of the band Wildeyes singing the duet vocal — it certainly was a raucous affair that resembles a rambling wreck more than a sleek machine. That probably defines me and Matt and the Golden Age pretty well. ‘YLDAW’ was filmed at Nashville Beard and Barber in Nashville, Tennessee, and captured by Joshua Britt and Neilson Hubbard of Neighborhoods Apart Productions.” — Bryan Simpson, The Golden Age