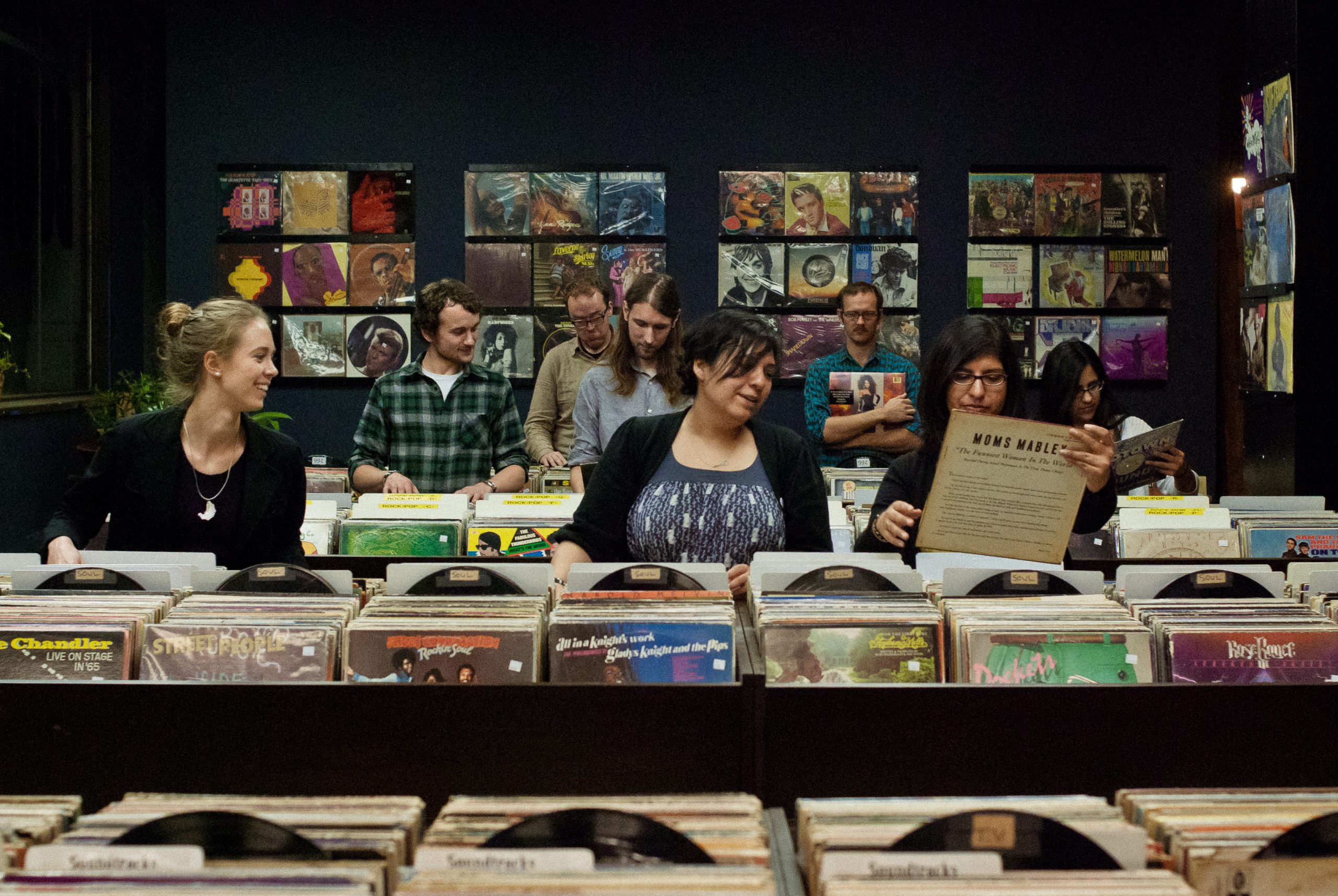 What kind of music do you expect to hear coming out of Eagle Rock, CA?  Given the neighborhood’s close proximity to classic venues like The Satellite, The Echo and hipster-heavy Silverlake and Echo Park neighborhoods, I’d guess to hear some indie rock, electro pop, and a few too many synthesizers.  The laptop production era may be here for some time, but amidst the region resides a pleasant alternative for traditional music fans: THE EAGLE ROCK GOSPEL SINGERS.

While gospel music may not be high on the list of popular LA genres, The Eagle Rock Gospel Singers get hands clapping and toes tapping.  Formed in 2010, the band of eleven has worked tirelessly to complete a new EP of uniquely original material.  They are celebrating their album release this Saturday, February 16th along with LA-based blues powerhouse, The Record Company.  The project is an old-time gospel record at heart, but the instrumentation covers electric blues, bluegrass and soul, with a roundup of beautiful group harmonies, banjo picking and a horn section fit for a New Orleans second line parade.  The Situation caught up with Will Wadsworth (guitar, vocals), Kim Garcia (vocals) and Jasmine Terán (guitar, percussion, vocals) to discuss analog recording, LA audiences and how to rock the gospel spirit.

One typically doesn’t expect to see a “gospel singing” group play venues like Satellite, Bootleg, Troubadour, etc., yet your fans have given you rave reviews and the word is spreading.  How would you describe these live performances and the reaction you’ve received?

Jasmine:  I think what people in the LA ‘indie’ scene are always craving is authenticity, and ours is one that people seem to respond to. Our gospel singing isn’t ironic.  We truly believe what we’re writing and singing about, and people are definitely respecting and reacting positively to that. We’ve gotten positive reviews from self-proclaiming atheists and been told that we ‘f****** rock’ and we’ll take it! Our songs aren’t meant to be exclusive by any means and we’ve been fortunate enough to play our music at some amazing dream-worthy venues in LA like the Troubadour in front of crowds that usually haven’t heard of us.  But, I think we’ve converted quite a few into fans. Our performances are inherently grand because there are a lot of us (at last count, 11!) so right off the bat that makes an impression and we try to bring the party we’re having on stage down to the audience. Lots of tambourine shaking, kick drums, slide guitar… we like the down-home nature gospel music has always had, and we try to recreate that energy during shows. My personal goal is to get everyone to clap along to a song at some point during the set.

Your songs are obviously full of biblical references.  But the lyrics are accompanied with elements of bluegrass and traditional rock n roll.  What else inspired your songwriting other than the Bible?  How much does religion play into your music?

Will:  Honestly, pain is a huge inspiration. If I don’t feel like I am crying something out and relieving myself of some kind of burden in a song, then I don’t usually bring it to the band. That may be why I gravitate towards early 20th century Gospel music. It is often about shouting trouble out of yourself. Many types of 19th and 20th century secular as well as Gospel music have inspired me/us. This includes things like Howlin Wolf, Miles Davis, Johnny Cash, Washington Phillips, Woody Guthrie, Sister Rosetta Tharpe, Hendrix, Motown, Mahalia Jackson etc. Our music aims directly at saying thank you to Jesus Christ for what we believe he did/is for us. The music that we play either tells a Biblical story or echoes a Biblical message, but we’re not shaking a finger at anyone and saying that they need to believe what we believe. We’re saying, ‘Hey, many of these old stories are really fascinating and whether you believe them to be fiction or historical truth shouldn’t stop you from being encouraged by them.’

What is your ideal performance setting? Venue? Audience?

Kim: Ideally, for a performance setting, the stage would have to be big enough to fit all of us comfortably. Currently there are 11 members in the band, and it’s possible that we could grow into something bigger. It would be great to be on a stage big enough for ALL of us. In LA, the best sound acoustically (with a big enough stage), is Disney Hall. The sound in that place is amazing! It would be great to perform there one day. However, if we’re getting loud, and we do, then I would say the Greek Theatre. Such a great atmosphere there for live music! It would be a dream to perform there. As for an audience, I’d say we like to see people being filled with the spirit! If we see anyone that’s clappin’, stompin’ and dancin’ wildly, in the audience, then we know we’ve done our job.

Tell me about the recording of your EP- the choice of songs and your decision to go analog.

Will:  The songs that we recorded for the EP were chosen by our producer, Matt Wignall. He visited a couple of our practices and selected the EP songs after hearing us play them. We wanted to go analog from day one because the music that we are trying to play is sort of a hybrid of music that is heavily influenced by really old recordings. The overall recording process was a lot of fun.

Jasmine:  Matt’s name kept coming up specifically because we were looking to go analog with the recordings and he’s kind of a go-to guy for that. He doesn’t work with too many artists (his main thing is photography and art design), but we had some good friends vouch for us after realizing he was a great fit. Our original keyboard player Jojo Lorentz and I met with him initially and Matt got our vibe and had ideas right off the bat. Plus, he secured an awesome studio/barn in Long Beach called Compound Studio that gave great warm tones and made the kick drums sound really nice.

Your kickstarter campaign page featured a video with the band describing your sound as ‘twangy, punk, metal, indie rock, blues, folk, gospel music…’  Do you think the EP covers all these genres?

Will:  Any time that anyone asks me what we sound like, I have a bit of a tough time answering. I usually just play them something or send them something to listen to because it is hard for me to tell what or whom we could be compared to. The punk/metal side of our music is probably not as clear on this EP as they are in our live performances. I would describe us as Heavy Indie Gospel Blues Rock with country and folk influences.

What can we expect at the EP release show along with The Record Company?  What are you most excited to bring to the stage?

Jasmine: This EP is basically a year in the making and we can’t wait to get it into the hands of our friends and fans, so that excitement we have is definitely going to be present on stage. We’ll be playing every song on the 6 song EP plus some new ones we’ve written in the last few months that no one has heard yet. Our last show was in November 2012 so we for sure have some pent up energy to release! Plus, we have two new members who’ll be joining us for the first time: Michael, our new fiddle/mandolin player, and Nathan, a young Brit joining us on keys. We’re stoked to be playing with The Record Company who we’ve seen play around town for the last couple of years, and we love their bluesy music. They’re awesome guys in general and we’re planning to share the stage with them and get really into our blues-gospel combo. It’s going to be a party!

Where do you see Eagle Rock Gospel Singers a year from now?

Kim:  I’d like to see us finishing up a full-length record and touring. And playing at festivals, like Stagecoach, SXSW, Bonnaroo, etc. The response we’ve received so far from people online has been amazing. It makes me think, ‘OK! We’re doing something good, we’re doing something right.’ I think it would be great to get out on the road and meet some of these people outside of LA. Maybe these are big dreams, but I think we can do it. I think we just need to keep puttin’ one foot in front of the other ’til we get there.

Jasmine: We’re just really super encouraged by everyone who loves our music. We started just playing living room shows and it was so fun to have all our friends come and watch and to have them still coming to shows when they have to pay!  And telling friends and spreading the word about us virally… it means a ton. Having our record backed through Kickstarter has made us feel really humbled and we hope they like the output because we’re really proud of it. It feels really wonderful to have a growing fanbase to go on this ride with us and we can’t wait to see what’s next.

Join The Bluegrass Situation and The Eagle Rock Gospel Singers celebrate their EP release at The Satellite this Saturday, February 16th.  For more information, check out www.theeaglerockgospelsingers.com.