On ‘Smoke From the Chimney,’ Tony Joe White’s Storytelling Lives On 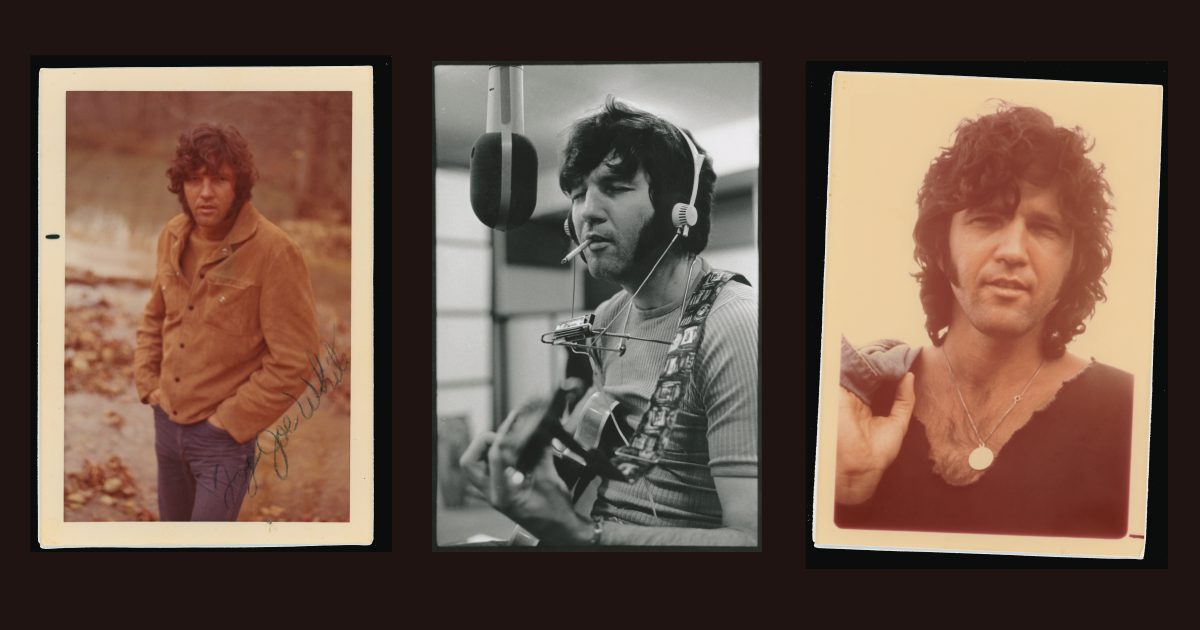 There’s some serious sleight of hand going on with Tony Joe White’s new album, Smoke From the Chimney. Well, sleight of sound, really.

Listening, you can easily picture the sessions: the musicians playing together with White, taking cues from him as they spin out a tableau of characters and scenes that flow as if they were chapters in a book. It’s the latest volume in a legacy of witty, gritty songs stretching back more than 50 years to “Polk Salad Annie,” “Willie and Laura Mae Jones,” and “Rainy Night in Georgia.”

And leading it all with a sly grin is the Swamp Fox himself, as he’s known, with his still-strong, speak-sing baritone voice echoing his origins in the tiny town of Goodwill, Louisiana — a barely-there dot on the map a bit east of Shreveport.

These sessions were done in the summer of 2019, a year after White died of a heart attack at age 75. Producer Dan Auerbach built the record around basic vocal-and-guitar demos that White had made over a period of years before he died. The illusion, though, is by design.

“I approached it very much the same way I would have any other album we do here,” Auerbach says from his Easy Eye Sound studio in Nashville. “I hired a band and we played live. And instead of Tony being in the room, he was in the headphones with us. You are hearing performances.”

“I’ve had people in the room that were less ‘there’ than Tony Joe was!” he says, laughing heartily.

The results are vibrant, a lovingly made set bringing out the full richness of White’s signature storytelling, steeped in his singular brew of soul, blues, rock and backwoods boogie. It’s the kind of stuff that over the decades led to his songs being recorded by dozens, from Elvis Presley to Waylon Jennings to Dusty Springfield to Tina Turner, but which had something extra when sung by White himself.

It’s not the only bit of deception going on in the album. There’s the matter of some of the most moving, affecting songs in the set. Take “Over You,” a heartwarming-turned-heart-wrenching ballad of love and loss. White sings touchingly of a relationship that started as friends at 7 years old, later growing into romance and a wonderful life together — until the woman, his soulmate, became ill and died.

Only one thing. Again.

“That’s not true,” says Jody White, the son of Tony Joe and, if you would have it from the song, the woman who died.

“No,” he says in a separate interview from his Nashville home. “My mom is still alive.”
In fact, Tony Joe White and Leann White were married in 1964, raised three kids and were together until the day he died. “And they didn’t meet when they were 7,” Jody says. “There’s nothing true about ‘Over You.’”

It’s as big a whopper as the record-size widemouth bass that mercilessly taunts its would-be conqueror in “Bubba Jones,” another highlight of the new album. But even Jody, who at 46 has spent his whole life surrounded by his dad’s work and became his manager 20 years ago, could get sucked in to the depth of the song.

“That’s the great thing about Tony,” he says. “He’d write these songs and you’re like, ‘Oh man. Poor guy!’ Like he must have been going through it now.”

This is nothing new. There’s a lot of did-it-really-happen running though his vast, vaunted catalog. “There was a ‘Rainy Night in Georgia,’” Jody says, noting at least some truth behind the song his dad wrote, which was a big hit for soul singer Brook Benton in 1970. “But a lot of his best songs are just fictional tales. Sometimes you can’t differentiate. ‘Polk Salad Annie,’ is that a real girl or not? And ‘Over You’ is kind of the same thing.”

Smoke from the Chimney, in both the songs and sound, builds on a resurgence that started in the early 2000s when, after laying low some, White had resumed touring and recording, finding enthusiastic receptions among both older fans and new ones. Auerbach, now 41, was among the latter. “I was a little bit of a latecomer to his music,” Auerbach says. “But as soon as I heard his original version of ‘Rainy Night in Georgia,’ I was hooked.”

Having established himself both as half of the Black Keys and as an in-demand producer (his extensive credits include Yola, Valerie June, Ray LaMontagne, Lana Del Rey, the Gibson Brothers, and dozens more), Auerbach started pushing to produce a Tony Joe album years ago.

“Dan and I met probably 15 years ago,” Jody says. “And he said, ‘For the last 10 years I’ve been wanting to produce a Tony Joe White record.’ And it just didn’t happen. He only co-wrote with a few people, like Jamey Johnson. They would come out to the farm and sit by the fire with him. That sort of thing. He wasn’t going to go to a studio and collaborate with someone. It just wasn’t what he did.”

Even after Auerbach moved from Ohio to Nashville a while back, it still didn’t work out. “We did get a chance to meet, though,” Auerbach says. “We were on tour with the Black Keys and we were both on a festival in Australia. Hung out backstage. I played his Strat. We hung out and talked. Pretty awesome, actually.”

When Tony Joe White died, Jody’s job changed, he says, “from ‘What are we going to do next?’ to ‘What did he leave behind?’” What he found was daunting. “I discovered that there was probably more unreleased music than there was released music,” he says.

Sorting through the archives, Jody found hundreds of songs put down on tape over decades of time — experiments with electronic keyboards from the 1980s among them. Some will surprise even the most devoted fans. But he was drawn to several reels from a few years before his father’s death.

“There was really no rhyme or reason why he recorded all those songs in that period of time,” he says. “Some are old, some were new. It’s all over the place. But it was weird how they all lined up.”

In July 2019, he texted Auerbach the demo of the song “Smoke From the Chimney.” Auerbach loved it and asked for more. “I sent him probably 11 songs and he said, ‘They’re all perfect.’ My dad knew what he was doing when he recorded those songs together.”

The timing was perfect, too. Auerbach had an unexpected break in his normally crammed schedule, and about four weeks later he told Jody he had most of the songs finished. “I’ve never seen anything happen so fast,” Jody says.

Auerbach says it was simply a natural fit for him and his label, Easy Eye Sound, which is releasing the album. “He embodies everything I’ve tried to do, and everything Easy Eye is,” he says. “It’s steeped in what he was about — diversity and the love of music, of all kinds. He so obviously loved so much music. Diversity and soul. That’s what he had. Boy. Some people just got it, you know?”

It’s a mission for him.

That’s played out through the wide emotional and musical range of the nine songs he picked. From the wistful title track to the swamp-voodoo chooglin’ of “Boot Money” and the campfire-side “Scary Stories” to the border ballad “Del Rio You’re Making Me Cry.” The achingly evocative “Someone Is Crying” is arguably the album’s sentimental peak, with strings swelling over the story of a young girl walking into the sunset after seeing her village burn.

With the band he assembled, Auerbach threaded that diversity of material together, consciously connecting, or transcending, genres. There are slide guitars (some by him, some by Marcus King) and steel (Paul Franklin) — a little touch of George Harrison here (the title song), Duane Allman and Dickie Betts there (“Listen to Your Song”). There’s Ray Jacildo’s Hammond B3 organ, a foundation for a wealth of Southern traditions touched on throughout.

On that ensemble he hangs such touches as the background vocals by Mireya Ramos and Shae Fiol of the all-women mariachi ensemble Flor de Toloache and evocative fiddles by Ramos and veteran Stuart Duncan on “Del Rio You’re Making Me Cry;” the strings on “Someone Is Crying” are the work of Matt Combs. Ultimately, it’s all there to illustrate the stories White tells.

Speaking of… there’s the closing “Billy,” a farewell to a life of drifting and to a lifelong friend “just like a brother to me.”

That has to be real.

“Didn’t happen,” Jody says of the song that’s the oldest on the album, having been recorded by Waylon Jennings back in the 1970s. “My mom and I were laughing about that. She came over and listened and she is like, ‘I don’t know how he makes this stuff up.’ She and I were speculating over who Billy could possibly be. And he was never homeless, walking the streets. None of it happened. None of it ever happened.”