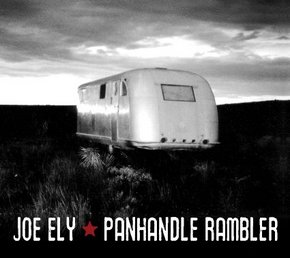 Death, taxes, and good songs from Joe Ely: Those are the three things you can count on in life and, with the release of this new set of a dozen tunes, the latter becomes more and more apparent. The central theme here is movement … of time, of people, of the restless heart. The songs are filled with references to Greyhound buses, women just out of reach, music coming from the mind and from the radio.

The opening cut, “Wounded Creek,” is a Spanish guitar-laced narrative of brambles and brush and scraggly Spaniel dogs. Ely beckons the biblical woman, “Magdalene,” to move with him to Mexico while Spanish guitar again informs the peyote bloom and lonely howl of “Coyotes Are Howlin’.” More allusions to coming and going, of music and men, on buses and in stock cars, are at the heart of “Early in the Morning.” “Southern Eyes” is a catchy crooner with a hillbilly gait while “Four Ol’ Brokes” spins a new yarn around an old cautionary tale of dealing dirty cards.

There are times when the production sounds a little too glossy and sterile for the material — we love music grown organically — but that’s a small criticism of a record of excellent songs that are well-played and well-sung.