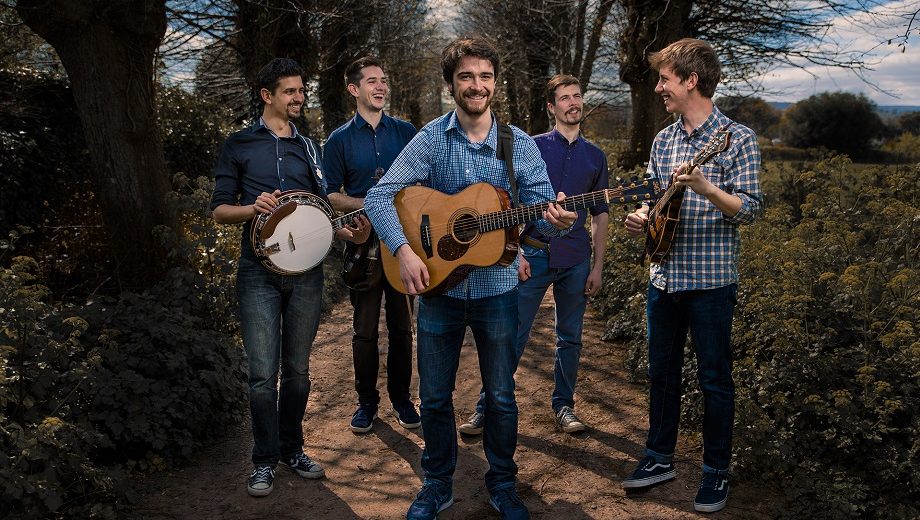 Pet Yeti is a UK-based bluegrass band made up of some of England and Northern Ireland’s finest pickers. Their debut album, Space Guitars, is a collection of original tunes and reimagined takes on classics like Michael Bolton’s “Said I Loved You…But I Lied” and Ola Belle Reed’s “I’ve Endured.”

The band includes Benjamin Agnew on bass, Reuben Agnew on guitar, John Breese on banjo, Kieran Towers on fiddle, and Joe Tozer on mandolin. In an email interview with we learned more about the group, what they hoped to achieve with this album, and where they’re headed.

BGS: Was there anything particularly memorable or special about making this album? What was the experience like?

Pet Yeti: The most memorable thing about recording this album was probably recording the Michael Bolton cover “Said I Loved You…But I Lied.” The decision to record that track was very last minute but everyone jumped into it with enthusiasm. Seeing it come together was surprising because we had not really known what a bluegrass cover of such a track would sound like. The result had us really satisfied, such to an extent that I think it suits the album nicely and we would really miss it if it was not included.

It was also a real privilege to record with Josh Clark of Get Real Audio. Not only as a friend of ours but also because he brings a finesse and professional ear for bluegrass music that is hard to find, even with comparisons to great recording engineers from the US. He also took a lead production role in the making of the album, which by itself would usually be big undertaking, so that we can say the album really has been shaped by him.

What was your goal with this album, musically speaking?

The original goal of the album was to be a voice for what Pet Yeti could do to authenticate ourselves in the bluegrass scene. However, it turned into a representation of all the band members’ individual tastes and interpretations. It is not often that a song like “Space Guitars,” based on the story of Doc from the Back to the Future movies, is on the same album as Michael Bolton covers and old-time music! I think the goal became the enjoyment of playing music and trying to put that across in every track that we could.

Do the five of you come from differing musical backgrounds? If so, how do you think those differences influence the overall sound of Pet Yeti?

Every band member in Pet Yeti comes with an appreciation of bluegrass music and we have all been followers of bluegrass growing up, though we all have our own genres that we enjoy delving into — whether that be the likes of old-time to Oasis to gypsy swing. I think it’s a really healthy mix to have a core interest but also to bring in the diverseness of individual interests because it means everyone in the band has a voice, even if we are not all singing. I think it’s this mix that separates Pet Yeti from a lot of other bluegrass ensembles.

You cover a lot of ground with this album, from carefully crafted gems like “I’m Turning Away” to high energy barn-burners like “Drinking Since the Day I Was Born.” Has that wide array of sounds added a new dynamic to your live shows?

While I do think the dynamic of Pet Yeti set list shows off the diverseness in our musical ability, a big aim of the set is that the audience enjoys the music. Not only with the energetic numbers, but also with lighthearted back stories of the originals.

Did you have a plan or idea of how this album should come together, or did it come together more organically while recording?

The album really is a product of a very organic process. We came together shortly before recording and developed how all of us would like the album to be recorded. However, a lot of the best parts of the album came during recording and because of the input of our excellent sound engineer. I think you need to allow this sort of organic process to keep things fresh.

You all have experience playing in other musical projects (Cup O’ Joe, Cardboard Fox, Kieran Towers & Charlotte Carrivick, etc.). What are some ways Pet Yeti is unique and different from your other projects?

Elaborating on an earlier question, Pet Yeti gives everything that you would expect from our other musical projects but with a lot more of each band members’ individual personalities and experience. Not one member of Pet Yeti is the “front man”, which is clearly seen in the album, giving each track in Space Guitars some other member the spotlight. Every band needs teamwork but Pet Yeti really relies on each member to create the overall sound of the band.

How has this album challenged you to grow as musicians?

The album has given us the opportunity firstly, as friends, to develop a unique sound together and have fun doing it. It also let us enjoy recording on a level that’s not as stressful and serious as other projects while maintaining musical integrity and making production enjoyable. Perhaps one challenge we have gone away with is how to put that enjoyment into all the music we produce and play from now on.

If you could perform this album at any venue, where would it be? Why?

While playing at any bluegrass festival in the UK, the US, or otherwise would be a privilege, the possibility to play as part the wider Glastonbury Festival would be a great opportunity and more ideal space for our unique flavour of bluegrass.