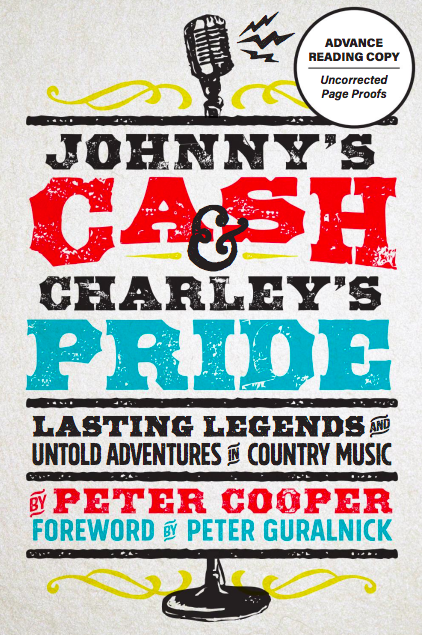 Peter Cooper knows a thing or two about country music. A songwriter, journalist, and current Country Music Hall of Fame writer/editor (among other things), Cooper has spent decades studying country music and picking the brains of the genre’s biggest luminaries. In April, he’ll release a new book — Johnny’s Cash and Charley’s Pride: Lasting Legends and Untold Adventures in Country Music — via Spring House Press. Complete with a foreward from legendary music writer Peter Guralnick, the book is a collection of essays detailing some of Cooper’s most storied encounters, from his time spent with the late Cowboy Jack Clement to trading thoughts on songwriting with Taylor Swift.

“Part of it was inspired by all of these people streaming into Nashville anew who don’t really have an understanding of the people who built this Music City,” Cooper says of his impetus to write Johnny’s Cash. “The book begins with Cowboy Jack Clement, because I think he’s the guy that everybody would be better off having met and been around. He’s just one of the most purely creative souls I’ve ever been around.”

Unlike many books about country music, Cooper’s doesn’t seek to serve as a definitive history of the genre. Instead, he lets his stories do the talking, offering color commentary on some of country’s most colorful characters. He wrote the bulk of the collection in the order it appears in its final published version, with one anecdote or interview lending itself to the telling of another in a conversational, almost stream-of-consciousness style of writing. There are also personal moments, where readers are treated to passages that read more like memoir than encyclopedia entry.

“A lot of things in the book are similar to stories I might tell somebody if I’m sitting next to them on an airplane or at a bar,” he explains. “They ask about Nashville characters like Cowboy Jack, Bobby Bare, Tom T. Hall. Rather than present any sort of linear history — and rather than have straight profiles of people — I just wanted to tell stories about storytellers and offer up what some of my interactions have been with them. A lot of times, when you get to know these people, they’ll trickle out some good hillbilly wisdom, and I was trying to remember those moments. I really want to tell [readers] it’s a self-help book. It’s really good advice from some really smart people, with some funny stories thrown in there.”

He did add one chapter, though — “Don Light and the Impossibility of Unscrambling Eggs” (“Don Light was fond of saying, ‘You can’t unscramble eggs,'” Cooper laughs, when asked about Nashville’s explosive growth in recent years.) — at the behest of Guralnick himself. “[Guralnick] had known Don Light very well and he knew that I had spent some time around him typing down the things that Don Light said,” he explains. “Don Light was this fascinating, kind of creative pragmatist who found a way to get Jimmy Buffett a record deal. He was the first independent talent agent in town. He brought Keith Whitley to Nashville and got him a record deal. He helped found the Gospel Music Association. He started the Jesus business and the ‘my head hurts, my feet stink, and I don’t love Jesus’ business.”

While readers will be hard-pressed to find a selection in Cooper’s book that lacks humor and humanity, one story about beloved country artist Lee Ann Womack has a special place in his heart. “There’s a story about Lee Ann Womack threatening bodily harm upon me that I thought was cute,” he laughs. “Heck of a singer and a wonderful person, as well, but she was dissatisfied with a largely positive review I’d written about her and threatened me late at night on a cell phone. She’s one of the best singers I’ve ever heard. In a room with her without a microphone, when there’s nothing between her voice and your ears, it’s just staggering.”

If there is a theme running throughout Cooper’s book, it’s that storytelling is at the heart of good songwriting, and that sharing stories about songs can’t be done without putting at least some of one’s heart on the page. “If you’re unbiased about music, or objective about music, then you’re not going to write anything good about music,” he says. “If you can’t listen to Emmylou Harris and be moved by it on some level and you stay cold and calculating at a distance, then you aren’t going to write anything of value.”