Punch Brothers’ Noam Pikelny: Getting Inside the Story 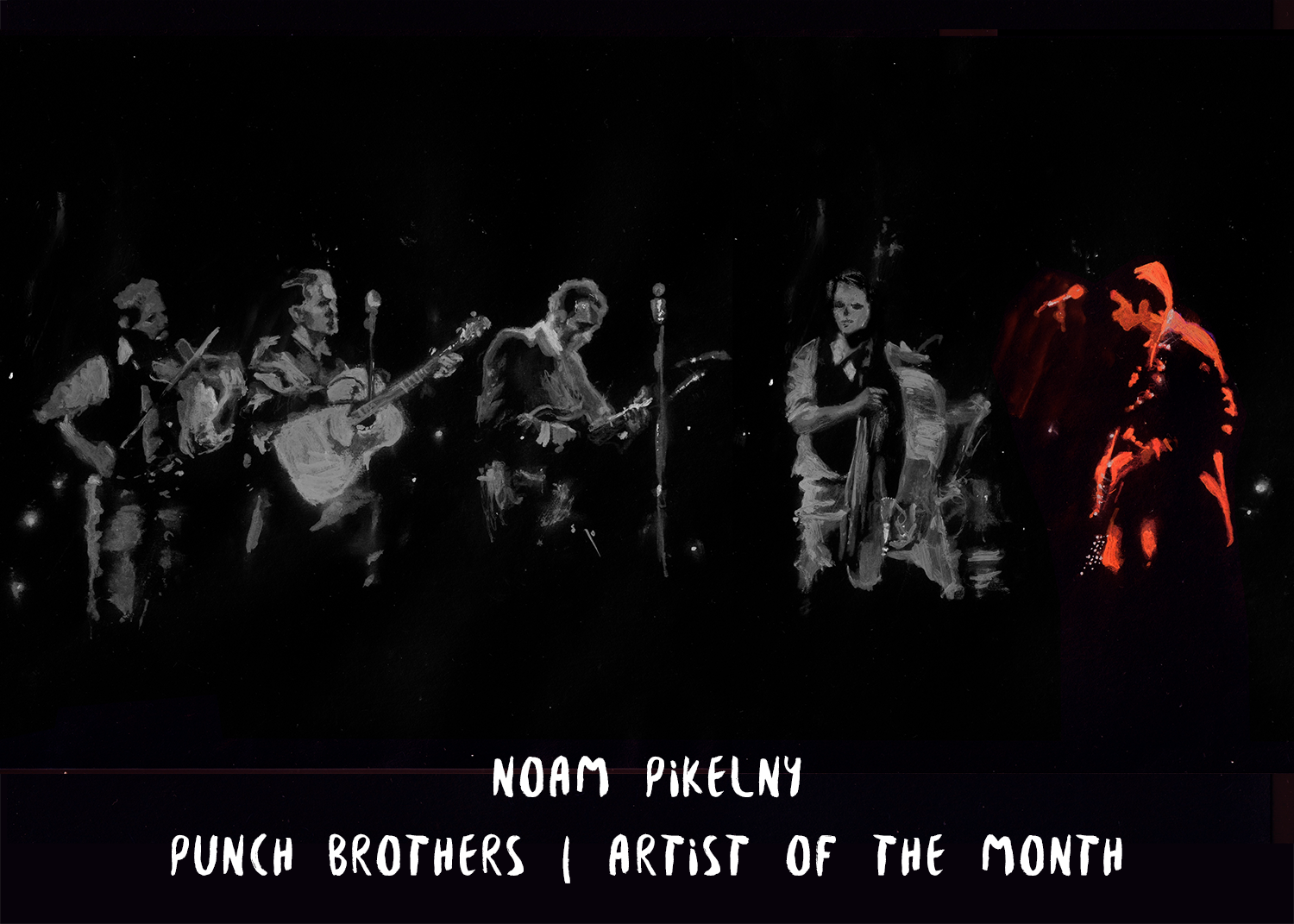 Noam Pikelny has a dry delivery only when he’s joking around. But as banjo player in Punch Brothers, his playing is crisp, inventive, and in step with his colleagues. This is especially true on All Ashore, a new release that explores the personal challenges of relationships as well as the growing political divide in America. This year he’s nominated for IBMA Banjo Player of the Year, while his two previous solo albums earned Grammy nominations. His Twitter bio sums it up: “Widely considered the world’s premier color blind banjoist. Punch Brother.”

This interview is the fourth of five installments as the Bluegrass Situation salutes the Artist of the Month: Punch Brothers.

When I was at your show at the Ryman, you were usually turned toward the band but I could never tell if you were singing. Do you sing with the guys on the songs?

Is that by choice or have they tried to convince you otherwise? Why is that?

Usually, like when I’m singing at all, it’s because we have like five part harmony going on. And I think it has to do with my range. I have the most limited vocal range of anybody in the band. But that was how I was born. I was born that way, it’s not my fault! … And then on the one song I sang on, on the last record, they invited everybody else in the universe to sing on it. On the song “Little Lights” that was on The Phosphorescent Blues. And so I think it essentially the policy that if Noam is allowed to sing, then everybody is allowed to sing. It’s only fair to have a one-hundred person overdub. I can’t hear myself because of all these people.

A couple of you have mentioned what’s going on in the country right now as inspiration. I think it’s on everyone’s mind, but why does it seem like a good inspiration for a song? Like “Jumbo,” for example. Why do you think it lent itself to writing a song?

Well, I think on a more macro level, I think it’s really important to be sticking to your guns. I think a lot of people are demoralized and questioning whether what they’re creating or what they’re doing for a living is valid in times when it seems like a lot of them are under assault. I know for me personally that having an opportunity to make music with musical co-patriots was very crucial. I feel like there’s such division right now in this country. I think people are thriving on families being alienated from each other. You think of the Thanksgiving dinner that becomes so troublesome. Friends are becoming alienated through all kinds of political differences and I feel like our sense of community and our sense of comradery as a whole is kind of under assault.

I think parsing through what’s going on in our lives right now, a solo project can be quite lonely. I think we find strength in working with each other and we have the ability to hone our thoughts with each other around, as far as what’s important to us and what we want to say. For “Jumbo” in particular, why does this make for good music? Or why is this musical inspiration? I ultimately thought that these people are like the protagonists that are Jumbo and his cohorts, they spend most of their time celebrating themselves. And we just wanted to get in on the action and celebrate them as well. So it’s really a celebration, more than anything.

It’s a fun melody if you just listen at the surface level. How’s it going over live? It seems like one that people would be responding to?

I think people are responding to a lot of it. [Playing live] is a huge component of the musical journey of this music. Making a record is obviously the most concrete and typical manifestations of the music. But the journey really is just beginning once that’s finished and we start playing it live, getting audience feedback, and shaping the song for the live experience. We’re flattered that people are enjoying it and starting to know the words.

Gabe that told me that you have a good story from being on Letterman. Do you have a minute to tell that story?

Oh, I’m not sure exactly what he’s referring to. I mean we got to go on Letterman about eight to nine years ago and play with Steve Martin. He announced that he was doing this yearly banjo award – it seems like a long time ago, it was nine years ago now. So, it was one of the more surreal experiences of a lifetime, getting to be up there with Steve Martin and Dave Letterman.

You were the first one to get that award. I remember when that started. Since then, a lot of your peers have been recognized. This sounds like a weird question, but is there like a banjo community or like an instant friendship when you meet another banjo player?

Um, there’s a secret banjo cult that meets in a cave in Horse Mouth, Kentucky, on the third Saturday of every month. And everyone’s totally cloaked and in these robes that are covered in banjo tablature… No, there’s no secret society – or if there is, I haven’t been invited yet which probably makes sense. But I think there’s an instant kinship with anybody else who’s pursuing music as their life’s work. And I think any instrumentalist, you always want to pow-wow and talk about their techniques and who they studied with, so I think there’s an extension in that way.

I wanted to ask you about songwriting collaboration. The way I understand is that everybody wrote the music together and then crafted the stories on top of the music. Is that pretty accurate? What was the process like?

We write the music instrumentally first, as a band, and that’s often with the five of us in the room. Oftentimes, Thile will be kind of singing, just gibberish, or a few words he has stuck in his head that associates with that music. Sometimes, those couple words will become the kernel of the song, and we’ll shape it around that. He often goes off and starts writing lyrics and brings it back for collective input, and we’ll help edit and shape the lyrics.

Sometimes we’ll have late-night discussions over cocktails or a drink, talking about what’s going on in our lives, whether it’s our familial environment or what’s going on in the world right now, and he’ll go off and try to capture that collective thought into a lyric. So it’s always different, but interestingly in Punch Brothers, the lyrics almost always come last. We write placeholder lyrics first, then that’s the final but obviously very crucial element.

Are you a good lyricist? Do you enjoy contributing in that way?

I don’t consider myself a true lyricist. I really do enjoy the process of working with the lyricist. And I feel it’s an effective kind of partnership to them to have Thile leading the charge in that way, but then having this kind of counsel for feedback that can be brutally honest.

You just got married this year right?

Correct. A few months ago.

So this album has a song like “All Ashore,” which is about a relationship falling apart, but then you’re a newlywed. In order to get into a character, do you have to set your personal life out of mind when you perform a song like that? How do you separate the two?

Well, no, I think “All Ashore” isn’t about the collapse. It’s more about the challenges. It’s the struggle and the ups and downs, the ebb and flow, to quote the song itself. But you know, when we get up and play a song like “Molly and Tenbrooks,” which is a racehorse song, I don’t feel like I have to identify personally with the jockeys or the horses … but I think it’s really important to get inside the story of the song and as you perform it, you can really deliver the intent of it.

And so there might be a difference of whoever is the lead singer. You’d have to ask Chris how it’s different, whether it’s sung from the first person, or a narrator, or an actor. All of those roles probably come into play on different material and especially on covers that we do. … I think you can emphasis the story even if you don’t see yourself in that story. That’s the case in music and in real life. I think being an instrumentalist, I’m trying to support the singer by helping him deliver the intent of the song. I make the story more vivid through the way that I play it.