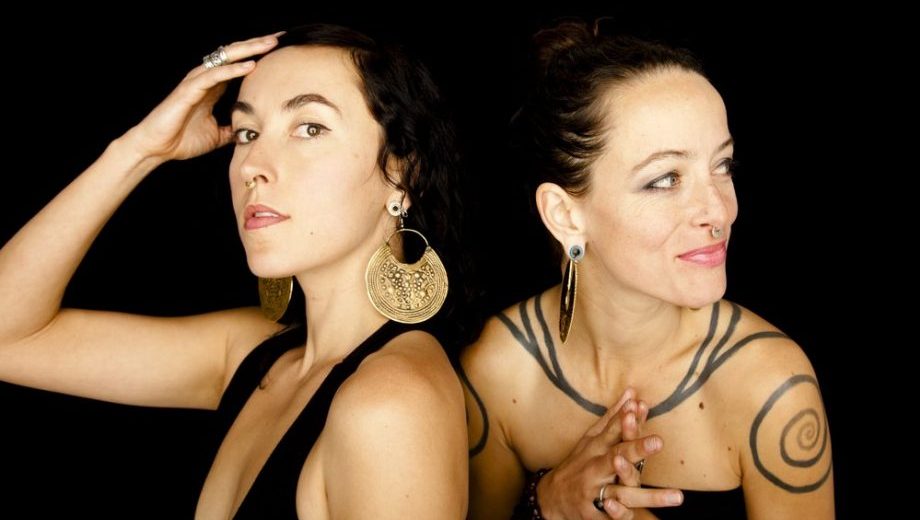 Just weeks ago Leah Smith of Rising Appalachia, the harmonizing duo with her sister Chloe, stood on a high peak and sang the old traditional tune “Across the Blue Ridge Mountains.” She was at the end of a stay in a remote village, and some local women surrounded her for a send-off.

“They circled us up and did traditional music with drums and flute,” she says.

Smith’s song was in appreciative answer, a thank-you for their hospitality. It was a perfect encapsulation of Rising Appalachia, connecting through music with people and the land that nourishes them.

This mountaintop, though, was in the Andes, not the Appalachians, perched above Peru’s Sacred Valley. Leah, Chloe and the four musicians of their band had just finished a six-week concert tour in South America. The others had gone back to the U.S., but Leah stayed behind for a little extra experience. And what an experience it was.

“To close my eyes and receive this absolutely magnificent mountain range in front of me, and these women who are community weavers and medicine keepers around me, and singing this song from my mountains to them in their mountains was a deep offering,” she says, speaking from the Atlanta house in which she and Chloe grew up.

This chat comes on the eve of the release of Rising Appalachia’s seventh album, Leylines. The title is a word for perceived connections and alignments of natural features around the globe, often used in a mystical sense. And that’s exactly what the album, and Rising Appalachia itself, are about.

The South America jaunt has already sparked “Agua de la Madre,” a new song that Leah wrote in Spanish, inspired by water-rights concerns of the region. But the focus now is on Leylines, made in a seaside studio in Northern California with producer Joe Henry. Leylines marks the first time the sisters have put their art in the trust of an outside producer, but it resulted in mutual appreciation.

“Leah and Chloe are fearless artists, as well as fierce activists,” he says. “They arrived with a sharp and committed point-of-view, yet were wildly open to what might otherwise transpire. I felt the same when I worked with Baez and [Harry] Belafonte — as well as when I produced their hero, Ani DiFranco, many years ago.”

In this BGS interview, Leah Smith explores a multitude of musical influences from around the globe and close to home.

BGS: Before we talk about the new album, tell us about South America.

Leah Smith: It was the band’s first time touring there. We’ve always preferred that our music is a vehicle of cultural exchanges. That’s the primary goal of Rising Appalachia. We’re building bridges and learning other people’s traditions and showcasing ours, and using that as a language. I lived for six years in Latin America — not consecutively. I moved to Mexico when I was 18. We have a really amazing fan base in South America and went to some places none of us had been. We learned about the music traditions and farming traditions, a lot of sustainability practices. We did our due diligence of what we think of as troubadours — musical ambassadors and students of the world.

Leylines was made before this trip, but will certainly impact your music to come, as other travels have before.

The name of the band really indicates what we do. It’s called Rising Appalachia. Appalachia is the foundations roots and culture we were born into. Rising out of it, using that foundation to grow wide branches. I always say about our work that we will never run out of material to study, to learn, to be influenced by. It’s impossible to run out. Every conversation on every trip adds to the fabric of our songwriting and goes into the lens that we view music through.

You start the album with traditional gospel in “I Believe in Being Ready.” Was that a big part of your musical life?

We grew up with so much of the Southern music in our home. Everything from jazz to gospel to old-time Appalachian roots music — and everything in between. This album is such a journey and departs in so many directions from the real simplicity that started our project 15 years ago. But we felt it was important for us to get the first breath of the album in the foundation of where our music came from. It’s got that old, archaic sound, very simple sister harmonies and a bit of the apocalyptic sense of the world coming to the end, in the gospel sense.

That’s a thread that runs through the rest of the album?

That’s what we wanted to do. I feel like every album is a chapter in our story, in a book of our lives. This to me is really exciting. Whether you’re remotely interested in the roots of music or not, this album holds all the roots of Appalachian music. We’ve always been influenced by that — the African roots of it, the Irish roots, the urban presence of Southern music, all the ways a very diverse and broad community has influenced Southern music. But we’ve never really presented it like this.

There are a couple of fiddle-tune pieces on this one, drawing on some of your first music experiences.

“Cuckoo” is one of my favorite songs on the album. We learned it from our mother and I just love that. Her version of this old traditional Appalachian song. I feel like we’ve probably known versions of “Cuckoo” since we were little kids. She has a beautiful trio, the Rosin Sisters. They recorded this version a few years ago and we said, “We’re gonna learn that version.”

Your dad is a musician too?

Do you all still play and sing as a family?

We do all the time! Every now and then we get them up on stage, but they are reluctant. I don’t know why. I would love for them to join us more often. I think they don’t want to be assuming that it’s okay.

On the song “Sadjuna” you explore African sounds.

That’s a song that Arouna Diarra brought to us, a traditional West African song. We do several different songs that are Arouna’s. This one had an incredible surreal dreamlike state to it. The song in its origin is very much about people that leave the world too young — when families lose young people in war or strife, or when parents see the passing of their children. So Chloe and I wanted to write two verses to accompany it that held the same space. I don’t like to be over-literal. But we wanted to bring that to people, a balm for people who had that passing in their lives.

For “Make Magic” you cite Erykah Badu and André 3000 of Outkast as influences. It still sounds like folk music, though with some different aspects. How does their impact figure into it?

That is our folk tradition, as young women growing up in the ‘90s in downtown Atlanta, Georgia. That’s where the genre [labels] don’t serve us. Hip-hop and soul are urban folk music, storytelling music.

More expected is the influence of Ani DiFranco, particularly on “Speak Out,” on which she guests.

Ani had such a potent influence on me as a young woman from the urban South. My folk traditions were a lot of underground hip-hop and blues and soul, and the folk music our parents were playing felt very distant to me. Ani was a bridge, this young, folk-rock, righteous babe, but she was playing Woody Guthrie songs and had a banjo in her hands. I was so inspired to see a radical young woman carrying these traditions that I did not have access to. And to top that off, using the stage, using her platform to be talking about really important issues — voting, women’s rights — with no apologies. Wasn’t polite, wasn’t tidy, was in your face and made you think.

What would you consider your mission?

What’s our signature mission? We don’t have one, really. We believe our roles are as public servants. It’s a public service job. We are collecting the joys and sorrows and struggles of ours and of our community. We want to know what the community is talking about and that has to be part of our show. Different every night. Water rights and human rights. Our role is to provide the stage for the people who show up night after night. We have to listen. That is an important thing.