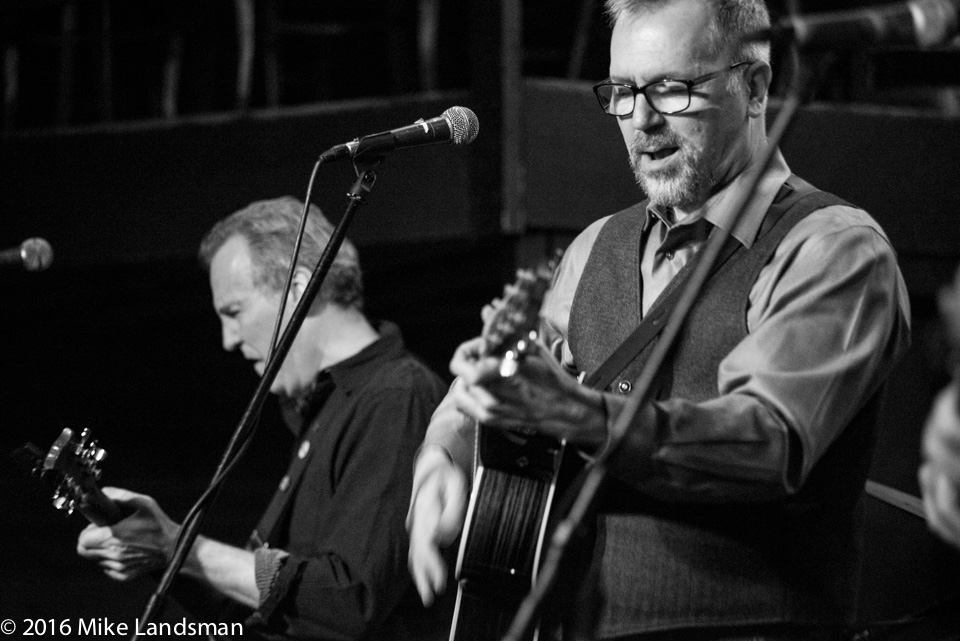 BBQ:
KJ: Jones BBQ, Marianna, AR — More than a bit off the beaten path, serving BBQ like no other for over 100 years.
JG: Hard Eight, Stephenville, TX — In the middle of cowboy country … the exterior serving area is along the side of the building, with a long counter where a guy with a cleaver will cut you sausage by the yard, ribs, chicken, brisket, and two-inch-thick pork chops that they then dip in butter. Nuff said.

Roadhouse:
KJ: The Sunset Grille, Annandale, VA — This has to be my choice, even though it closed in 2012. Beer in pitchers, bikers, and Bill Kirchen tearing it up. Cannot be topped.
JG: Blue Moon Saloon, Lafayette, LA — A venue and boarding house all in one in this magical, sultry little outpost. That extra drink is never a problem when you're playing about 30 feet as the crow flies from where you're going to sleep.

Coffeehouse:
KJ: Red Emma's, Baltimore, MD — The ultimate leftist coffee hang. Not recommended for Trump apologists.
JG: Heine Bros., Louisville, KY — Great joe and a good place to while away some hours, which also connects to Carmichael's, an excellent bookstore.

Dive Bar:
KJ: Mount Washington Tavern, Baltimore, MD — Open after the apocalypse. With mediocre pizza that tastes amazing when consumed at 1 am.
JG: Nick-a-Nees, Providence, RI — In a town with a storied history of dive bars, this place has the vibes and a very game audience to go with the fine music they present. Check out Mark Cutler when he plays there.

Record Store:
KJ: The True Vine, Baltimore, MD — The end of the line for vinyl geeks. If you recognize what they're spinning when you come in, you may be offered a job.
JG: Amoeba, Berkeley, CA — One of a dying breed, a veritable bazaar of waxings of all vintages. You could spend hours.

Gear Shop:
KJ: Appalachian Bluegrass, Frederick, MD — Was told by multiple "certified" repairmen over a 12-year period that my 1969 Martin D35 was beyond repair. These guys said, "It will be ready next Wednesday." And it was.
JG: Guitar Emporium, Louisville, KY — Good stuff at good prices, run by cool cats in a cool town.

Taco truck across the street from 2A in Manhattan. The best in the city. #masterofnone #tacotruck #treehouse2a

Listening Room:
KJ: The Village Vanguard, NYC — Want to know exactly what it was like when Coltrane played there in 1962? It's still exactly the same. Drinks only.
JG: Tom Clark's Treehouse at 2A, NYC — TC's labor of love is one of the hippest scenes in Manhattan on Sunday nights. Great sound, great bands, wonderful host, and no cover.

House Concert:
KJ: Club 603, Baltimore — Have seen everyone from Vandaveer to the Bottle Rockets in this intimate, acoustically perfect safe haven for greatness.
JG: Boudin Dan's, Peace Dale, RI — Dan and his wife are incredibly gracious and dedicated to presenting music in the most agreeable way for both the artist and the audience. I wish there were hundreds more like them.

Highway Stretch:
KJ: I-40 from Memphis to Little Rock — Feel what is beyond the emptiness.
JG: Blue Ridge Parkway, NC — Breathtaking. Just don't drive a vehicle with a commercial logo on it or a kindly trooper will steer you to the next exit.

Day Off Activity:
KJ: Back Alley Dice in nearest back alley.
JG: Practicing. They don't call it "playing" for nothing.

Driving Album:
KJ: Freedy Johnston, Can You Fly?
JG: NRBQ, At Yankee Stadium — There is no mood that America's most underrated band can't improve, "any old time …"