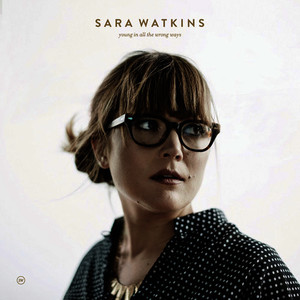 Sara Watkins — at 35 years young — is basically an elder stateswoman in the Americana world, playing fiddle and singing in Nickel Creek since 1989, when she was doing it for tradition, not trend. In all that time, she's only released three solo records: a self-titled effort in 2009, Sun Midnight Sun in 2012, and now, Young in All the Wrong Ways, released this past Friday. When you can count your musical career in decades, and mostly as part of a band or the family business — i.e. the Watkins Family Hour, which went from live revue to recording last year — it's hard for people to figure out exactly who you are, if it's not packaged easily.

Which is perhaps why so much of the chatter surrounding Young in All the Wrong Ways has been about how, after all this time, we're finally getting to know the "real" Sara Watkins — that she's finally "reintroducing" herself to the world. And while it's true that the LP is a thrillingly prescient look at her life, driven by a spirit of experimentation and musical play barely reliant on her signature fiddle, it's also true that, if songs like "You and Me" from Sun Midnight Sun didn't make it clear what Watkins is capable of — or how clear her voice is (in both tone and identity) — then maybe you weren’t listening hard enough. Just because she was more joyous there didn't make the music any less real … fiddle or no fiddle.

Young in All the Wrong Ways is a breakup album of sorts — with her label, with a romance, with "herself," as she's said — so it's darker and more introspective than anything she's done before. But it's the same Watkins, just evolved. Take "Say So," one of the album's most moving tracks: There's none of that aggressive fiddling, but her crystalline vocals are deeply intact, wandering and quivering around pop-rock construction in only the way someone raised on bluegrass can do. It's no reintroduction, just the work of a woman who knows what comes from her lungs, and her mind, is just as powerful as a bow and a set of strings.