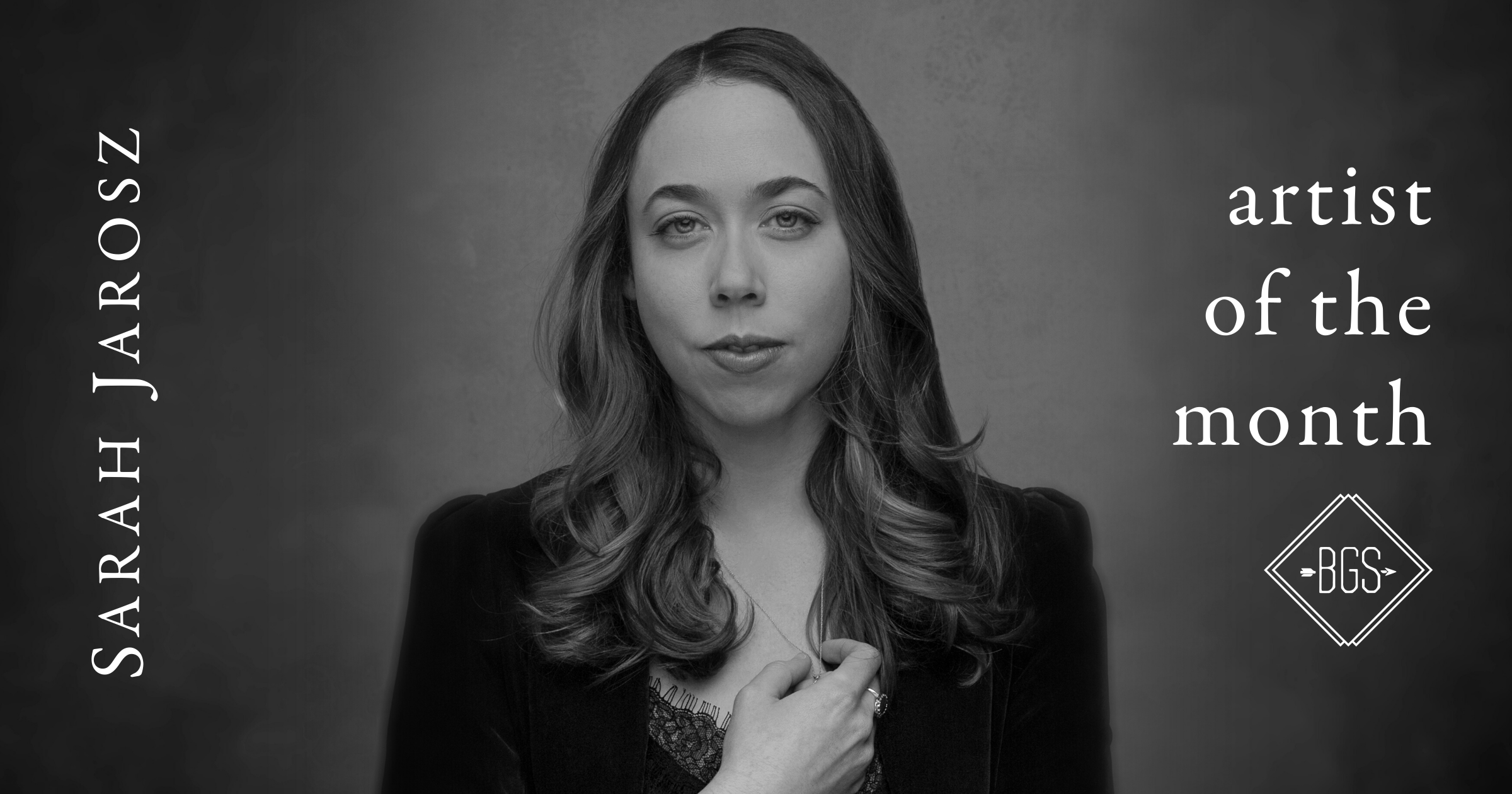 After years spent living in New York City and traveling the world on tour, Sarah Jarosz has turned to a source of inspiration she’s never mined before: her hometown.

With her fifth album, World on the Ground, the Grammy-winning artist gleaned her own folktales from the everyday rhythms of her life in Wimberley, Texas. Her time away from Friday night football games and the shadows of cypress trees allowed her to look on Wimberley’s details with fresh eyes, from the Ford Escape her parents drove and the dusty trails it kicked up to conversations about out-of-reach dreams with old friends (that she examines on “Maggie,” which came from an actual heart-to-heart she had with an old friend at her high-school reunion).

Jarosz found a breakthrough in the most familiar folds of her memory, but this perspective was also molded by the city that guided her as she retraced her steps through the Texas Hill Country in her lyrics. On “Pay It No Mind,” the single that gives World on the Ground its name, Jarosz alludes to this ability to find meaning and movement at a distance: she sings of the frightening, and often destructive, churn of life in our current moment from the point of view of a “little bird stretching her wings” who takes in the chaos from the seventh floor.

“I think being able to write and make this record mostly about my hometown, in New York, from far away, was an interesting part of the process,” she says. “It’s almost what allowed me to take on the role of the little bird on the seventh floor in a way, because I think it took leaving Wimberley and being away from it for quite awhile to be in a place where I could actually write about it in this way.”

In the first half of our two-part interview, Jarosz walks BGS through the little Texas town that became her muse, how her work with bluegrass supergroup I’m With Her left an impact on her creative process, and more.

For some people, going back to their hometown is a traumatic event, a negative, damaging experience. There’s clearly a lot of compassion for the voices you explore on World on the Ground, which was inspired by your own hometown. If you were to visit Wimberley with fresh eyes, how would you describe it?

Jarosz: One of the things that stands out about it compared to other towns of its size in Texas — and I think this would be obvious, even if you’d never been there and were taking a drive through town — it seems like it’s a little more balanced. It has one high school, and one football team, and a lot of the small town culture does revolve around that, around this sort of Friday Night Lights idea of a small Texas town.

But there’s also this incredible artsy kind of community in Wimberley. One of the big draws of Wimberley is its market days, which I think happens once a month — maybe it’s every weekend in the summer, I can’t remember. Arts and crafts and even the fact that there was a bluegrass jam every Friday night, that was why I fell in love with all this music in the first place. It feels a little more balanced in that way.

I truly feel, probably in a biased way, that it’s a very magical place. A lot of people who drive through it, if they’re driving around the hill country in Texas, would agree that it’s one of the towns that stands out from the rest. It has this kind of shimmery quality to it — that’s the word that comes to mind.

I love the contrast of “Maggie,” then, in which you’re singing from the perspective of a friend of yours from high school who can’t wait to leave the small town behind. I appreciate “Maggie” because it’s a real conversation you could be having with anyone who’s stuck where they are. The location is almost insignificant, because it’s about whatever’s holding you — it doesn’t necessarily have to be the town you’re in.

Exactly. The “football games and processed food” line definitely puts it in a place, but I feel like [the song] could also be anywhere. I purposely tried to make that happen. It was such an eye-opening thing for me to actually have this conversation with this friend — we were really close friends in childhood, then just drifted apart over the years, and ran into each other at my tenth high school reunion. She actually didn’t go to my high school, she went to a different school and that’s why we drifted apart.

She was asking me about my touring and my life and everything, and I think I was probably saying, “I wish I could be in one place more. I wish I had more of a home sense at this point in my life.” She was sort of saying, “All I want is to do what you do, travel and see the world.” It’s funny how sometimes the things that seem so obvious take just a simple moment of someone saying it to your face, and then you realize, “Oh! Duh!” That really happened for me there. That song is all about empathy and compassion for anyone who wants their circumstance to be different than it is and might not necessarily have the means to make that happen, but still having the dreams to hopefully one day change.

A lot of these songs feel like gifts, in the sense that I generally feel like a very, very slow lyrical writer. The music comes more quickly to me, but that song and a lot of the songs that I wrote with John Leventhal were similar experiences. If he had the music written and sent it to me, the lyrics seemed to come very quickly. “Pay It No Mind” and “Orange and Blue” were two of those.

“What Do I Do” was another one where it almost felt like a dream to write. It’s similar to “Maggie” in the sense that it’s that same sort of longing for wanting something else than what you currently have, but then it’s also a thankfulness and acceptance in that. It almost feels like a mantra-type song where it’s repeated and it goes to a different place — very simple chords in the verses, and then it opens into this washy vibe in the, “What do I do, what do I do?” It was one of those gifts of a song.

You’ve been collaborating with your friends Sara Watkins and Aoife O’Donovan for years. Now that you’ve written albums and toured together, do you hear, or did you feel, the imprint of your time with I’m With Her going into this record in a new way?

I felt it in a creative way, personally. I think all of us were just so positively influenced by that experience [of] touring and putting out that record. What that allowed all of us — I’m speaking for myself, but I’d imagine they probably feel a similar way — was just the chance to step back and take a breath. Not in a busy sense, because we were just constantly working and on tour, but creatively.

I had never been in a band before; I had only ever put out my solo records. I think after Undercurrent, I couldn’t really imagine going straight into another solo record or album push because I just wasn’t inspired to. I had reached a point where I had wanted to experience something new. There was something so rewarding about feeling like I was a part of a team. We were all on each other’s team and carrying the load together. It was just so wonderful and magical. It definitely gave me the creative juice to just be so psyched about making this record.

With Sarah and Sean making their Watkins Family Hour duo project, and Aoife making Bull Frogs Croon, I love those projects so much because [we] all seem so inspired. I think that is because we all allowed ourselves this chance to step back from our own things, be a part of a team and give ourselves the gift of this renewed inspiration, almost. I definitely felt that. I hope they do, too. I’m so grateful for them.

Editor’s Note: Read the second half of our interview with BGS Artist of the Month Sarah Jarosz here.