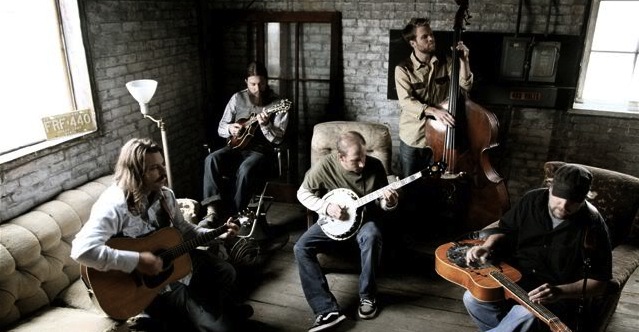 Hey y’all.  We’re back to business here at BGLA.  Thanks for your patience over the past week or two… life has gotten pretty crazy (ended one job and started another!) plus we’re making some exciting changes and additions to the site… the first of which I’d like to introduce right now…

Brian is our newest contributor to BGLA and a welcome addition to the crew.  For his first feature, he’s highlighting Greensky Bluegrass, who play at The Mint on West Pico this Saturday, July 30.  So without further ado, let’s give Brian a warm welcome…

What comes to mind when we think about a bluegrass show? A fiddler dueling with a banjo player? Maybe a classic Bill Monroe cover? How about some Prince or Michael Jackson? That’s right. I’m talking about King of Pop moonwalking with a twist of grassy goodness. I admire the traditional bluegrass concert, but how many bands can transform Prince’s “When Doves Cry” into a joyous, twelve minutes of string-pickin’ jam rock? Welcome to a typical night with Greensky Bluegrass.

The Michigan-based quintet- Paul Hoffman on mandolin, Dave Bruzza on guitar, Michael Bont on banjo, Mike Devol on upright bass, and Anders Beck on dobro- are back in Los Angeles on Saturday, July 30th at The Mint. Playing over 150 shows each year and this current tour hosting stops across the country, Greensky Bluegrass is clearly focused on playing music to diverse crowds. Like many other bluegrass bands, Greensky began their journey performing traditional songs behind one microphone. While rocking the stages of Bonnaroo and Rothbury, Greensky can also entertain the smallest of venues. What better way to preview a show than to take you back to their last performance in LA?

It was warm evening in February 2011, and the boys just arrived for their first show at The Mint. This was an audience that was ready to hop, jump, and get down with the pickin’. While the band opened with a slow but fantastic rendition of “Groundhog”, I pondered the implications of opening a February show with a song about the month’s most famous rodent. Have no fear, Los Angeles. We never get long winters; “Groundhog” only served as the long introduction to a lighting-fast “Wheel Hoss”. This Bill Monroe instrumental, complete with stellar banjo work from Mike Bont, got our feet moving. The set included some originals, including “Better Off” and a ten-minute long “Train Junkie” with flawless soloing between Beck and Bruzza. They ended this high energy set with Bruce Springsteen’s “Dancing in the Dark” leading into Bill Monroe’s “Gold Rush”.

While the second set included some great sing alongs- The Band’s “Shape I’m In” and Prince’s “When Doves Cry”, I’d argue the highlight came at the very end. The traditional “Little Maggie” quickly turned into a “Freebird” jam to conclude the set. For you thousands of Lynyrd Skynyrd fans out there, imagine the classic double-guitar finale with a heavy bluegrass touch. Even the hardest rock fans would be clapping their hands.

Greensky Bluegrass takes the stage at 9 pm on Saturday, July 30th at The Mint. A free download of five songs from their new CD, Handguns, will be available on their website for all to hear and share until the disc release in early October. Check it out!