SHOW PREVIEW: Head for the Hills 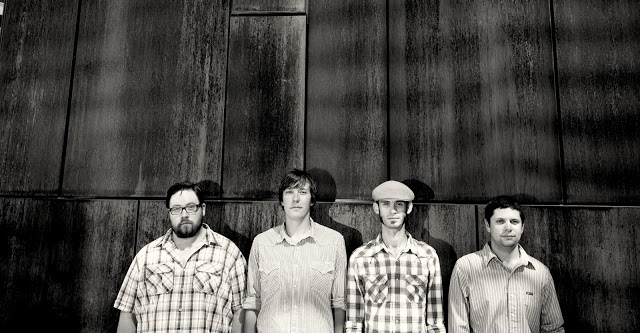 “You better head forthe hills, folks! Or you’ll be up to your armpits in Martians!”  – BugsBunny

The cartoon world’s most mischievous yet beloved rabbit maynot be your stereotypical symbol of modern bluegrass, but I’ll quote that bunnyevery chance I get.  It doesn’thurt to take advice from the same animal that convinced Elmer Fudd it wasalways duck season.  But it’s Aprilin Los Angeles, and the air is still cold and crisp.  Duck Season? Rabbit season?  Put yourfirearms away, Mr. Fudd.  It’sstill Rocky Mountain Bluegrass Season in the Southland.

Head For The Hills returns to Los Angeles for a specialevening of picking at The Mint on Wednesday, April 4th.  The Fort Collins, CO quartet may havetaken its name from the writers of LooneyTunes, but there’s nothing childish or cartoonish about the rising stars ofthe acoustic string scene.  Thepast months have brought major changes into the bluegrass community: thepassing of Earl Scruggs, the return of Howard Levy to the original Flecktoneslineup, the growing popularity of roots-rock groups such as Old Crow MedicineShow and The Avett Brothers, and the list continues.  While America experiences this musical transformation, theColorado scene has always offered top shelf string picking.

I briefly spoke with Joe Lessard (fiddle) and Matt Loewen(bass) last weekend.  Taking notesfrom traditional pickers but also Colorado’s current acoustic genre breakerssuch as Bill Nershi and Drew Emmitt, Head for The Hills gives more than thetypical bluegrass performance. Mike Chappell (mandolin) and Adam Kinghorn (guitar) complete thequartet.  Head for The Hills begantheir journey at Colorado State University and have been pushing forward eversince their days in college.  Thequartet will travel up the coast and through the Midwest with stops atWakarusa, Telluride Bluegrass Festival and Dead on The Creek to name a fewselect dates.  These largerfestivals will result in a bigger audience, but The Mint has never failed tobring a dedicated fanbase.  Lessardand Loewen explain, “LA is certainly a center for music, culture andentertainment.  It’s great to beable to bring our mix of sounds and songs to that kind of audience.”

While we can expect a set of songs selected from 2010’s Head For the Hills and 2007’s debut Robber’s Roost, Head for The Hills takespride in their non-bluegrass influences; We may be treated to renditions ofPink Floyd’s Fearless or Ray Charles’ Unchain My Heart.  Lessard and Loewen claim:

Wetry to make a set list that reflects the atmosphere of a given show. We playour style of music regardless, but we might not play the Iron Maiden cover forthe sit-down bluegrass crowd… We love any show where the audience is returning the energy we’re puttinginto the music. Those seem to be the concerts that best represent our band and what we’re really trying to do.

It’s difficult to pick a favorite cover among such a diverselist of songs, but it’s the instrumental jams that highlight the band’s trueskill.  While the debut albumfeatured gems such as Robbers Roost andHornets Nest, the compositions gotmuch tighter and more soulful in the sophomore release.  The nearly seven minute Nooks and Crannies is arranged with thecomplexity of a Flecktones’ jam that also flirts with the despair of TheAnimals’ House of the Rising Sun.  Bluegrass traditionalists, do not beafraid.  Head for The Hills stillhave a number of songs about cold days, railroads, mountain towns and othercommon themes of the genre, but you surely cannot forget these wildinstrumentals.

The busy tour schedule brings good news at the end of thetunnel.  The band explains:

Weare just finishing a live record that will be coming out in May. Five showswere recorded in Colorado and we’ve culled the best material for what will beour first live record. A new studio album is also in the works; we’ll bestarting on that later this spring/early summer. We’ll be playing some of thosesongs at The Mint on the 4th!

Join the BluegrassLAfamily for Head For The Hills at The Mint on Wednesday evening at 9 pm.