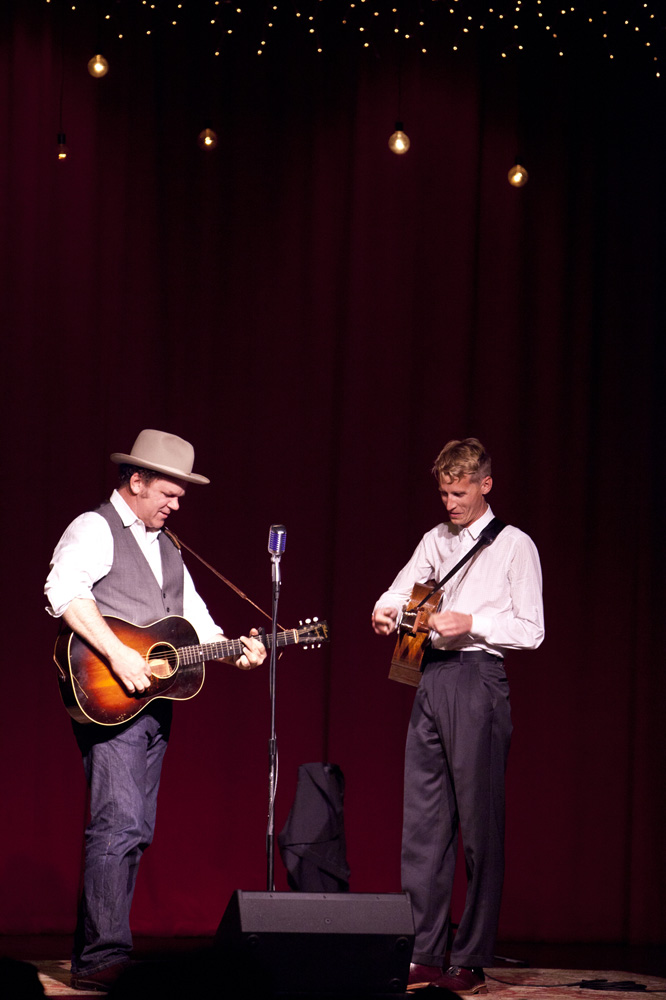 On March 28th, John Reilly & Friends, a collective of artists featuring actor-comedian-musician John C. Reilly, performed a heartfelt set for a packed crowd at Largo in Los Angeles.  Reilly served as emcee, performing most of the songs, making witty comments and introducing his fellow musicians as they took the stage. It was a remarkable evening of music that paired Reilly with singer-songwriter Tom Brosseau, Becky Stark (of My Lavender Diamond), Willie Watson (formerly of Old Crow Medicine Show), Dan Bern (who wrote songs for Reilly’s film Walk Hard) and bassist Sebastian Steinberg.  As the musicians stood on the simple stage, lit by dangling Edison bulbs, and sang into one lone microphone, it was clear that this was the way folk music was meant to be performed – by a group friends playing tunes they love.

In contrast to his comedic persona, Reilly was the musical straight man of the night, allowing the other musicians to color the songs with their own personal style. That’s not to say his own chops weren’t impressive; his pure baritone and acoustic strumming were sterling. Still, his steady vocals and accompaniment provided a core for the other musicians to embellish with their own sound. Reilly and Brosseau’s haunting rendition of “Sinking in the Lonesome Sea” was imbued with the dissonance and melancholy found in Brosseau’s solo work. Stark’s duet with Reilly on the Dolly Parton number “My Blue Tears” showcased her pixie-like personality and lush, emotive voice. Watson’s folk banjo and wailing tenor lent a rollicking old-time feel to his tunes, which got the audience clapping right along.

Reilly’s banter between songs (and occasional jab at his musical costars) was a highlight of the evening. “He’s got a voice like a banjo, don’t he?” he noted about Watson’s signature singing. Later, he teased Brosseau about his hair: “Tom’s going for the full superman curl tonight.” Other times he’d turn his jokes on the setting: “honesty is like a beverage in Los Angeles – it’s a delicious one, but the real stuff’s hard to find.”

Reilly’s comedic candor in this context with the other musicians served another more important role: it made clear that the word “friends” in the group’s title is not just a marketing gimmick. Their camaraderie added a sweetness and honesty to the show, especially in the numbers that saw all six performers gathered together. These group songs, from the slow Celtic traditional “The Auld Triangle” to a raucous interpretation of Woody Guthrie’s “I Ain’t Got No Home In This World Anymore,” featured soulful, tight harmonies in the chorus. Then on each verse a different vocalist would step forward and sing, giving them an opportunity to present their own unique timbre and phrasing. It was a treat to get a feel for the distinct musical styles that merge in this diverse, but unified, community of musicians.

“We’re keeping the old songs alive,” said Reilly early in the show. “That’s the mission of the band.” John Reilly and Friends are doing a hell of a job of reaching that goal. “These songs are your songs as much as they are ours,” said Reilly, “so thank you for sharing them with us.” The pleasure was all ours.