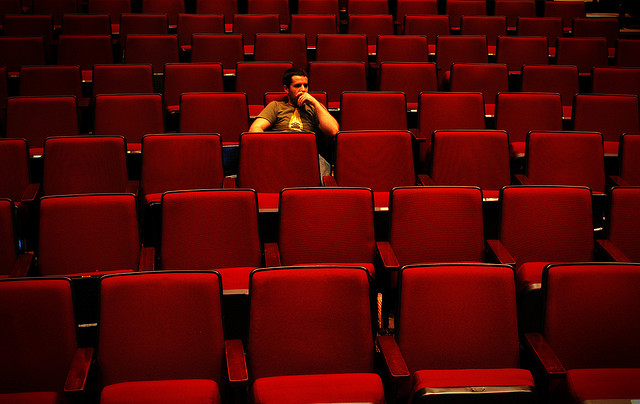 SAN JOSE, CA — After several rewrites of an email that had been sitting in his drafts for a week, area singer/songwriter Dustin Hobbs hit send on the reply to club promoter Gary Shields, reassuring him that the crooner could bring in the minimum 150 people required to lock down a gig at the popular Paddy Wagon venue in downtown Boston, MA.

Doing some quick mental math, Hobbs reasoned that the minimum wouldn’t be too much of a stretch. “Let’s see: I’ve got 90 people on my Boston mailing list, plus another 200 in the New York City area. Aunt Pat lives in Somerville and she’ll bring along a few of her lady friends.”

“There’s that super hot band Lady Steak in Boston,” Hobbs continued. “Last year, the drummer said he liked my stuff so I bet they could get a huge crowd to my gig with one tweet.”

In a previous draft, Hobbs had considered asking Shields if he would accept a draw of 100 since his actual draw is probably closer to 30, but he ultimately decided to “Fake it til you make it,” as he put it, mentally committing to an extra push with his fans to attend the Monday night show between Christmas and New Year’s Eve.

Having checked out several books on fan engagement from the local library since Shields had written back “mabye, whats ur draw” to his seventh follow-up email, Hobbs was sure he had sent the right response. “What would Tom Waits do, you know? Would Gordon Lightfoot undersell himself? Hell no! I’ve got thousands of plays on Spotify. So, no problem, man, I can get 150 people to a show. Plus, I’ve got two months to really get people fired up about this.”

As of the second week of December, Shields had not opened the reply email.