Six of the Best: Weird and Wonderful Bluegrass Covers 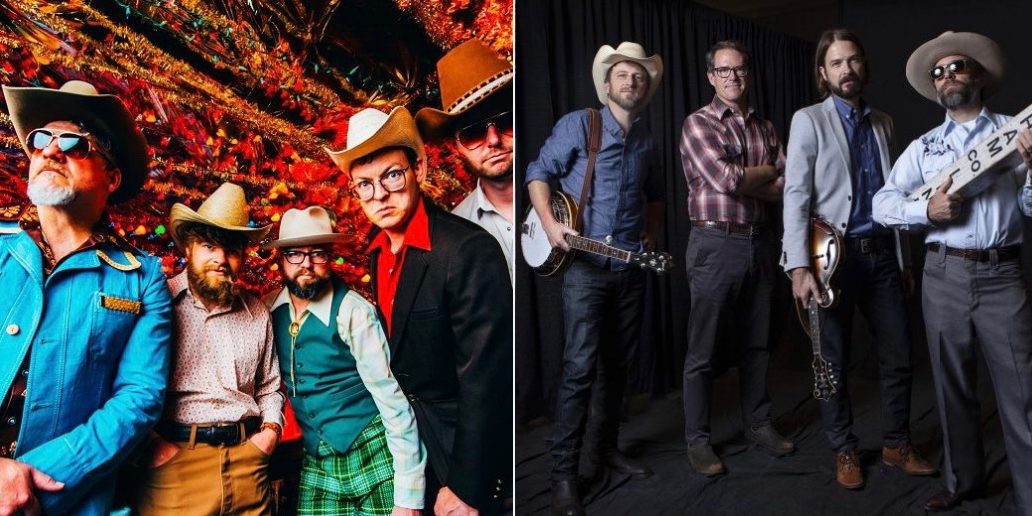 It’s a big month for bluegrass covers. Chatham County Line revealed some of their biggest musical influences (and favourite songs to soundcheck to) when they released Sharing The Covers, their eighth studio album, with arrangements of Beck, John Lennon, Mick Jagger, Tom Petty and Wilco, to name a few. It’s a record that will present the warm glow of familiarity to all those pickers who cut their banjo teeth on Beatles and Stones songs – and which among us has never heard “Norwegian Wood” floating across the festival field at 2am?

Meanwhile The Cleverlys – the reigning kings of the bluegrass pop cover – are putting the Beyoncé back in bluegrass on their latest album, not to mention the Bieber and the LMFAO. Call them a novelty act, call them comedians, but there’s plenty of merit in their musicality – and there’s something about their Ozark twist on Kelis’s “Milkshake” that’s going to stay with you ’til the day you die.

For more envelope-pushing, boundary-breaking, what-were-they-thinking-please-don’t-let-it-stop covers, check out our picks below.

This one’s a winner from the very first line. Sure, Ricky Skaggs has never let his own freak flag fly, but hearing him sing the words “She’s a very kinky girl” somehow gives you hope that one day, the divide in America might be healed. It’s a nice antidote to all those bluegrass songs about dear, dead old mothers, and one you suspect might have brought on their demise in the first place. Hang on in there for the slick modulation in the final instrumental…

Presumably this is a song that resonates with bluegrassers – since no one’s in this music for the ker-ching ker-ching or the ber-bling ber-bling. Plus, if the sound of Jason Carter jumping in on the chorus to sing ‘it ain’t about the money-money-money’ doesn’t flood you with instant joy then you may want to get your frontal lobe checked out. We picture him practicing his harmonies as he bumps along on the bus next to Del, trying to explain who Jessie J is. Actually that raises the question – how the heck did he know?

Notable not so much for its inclusion on Hartford’s 1984 album Gum Canoe, but for the rare music video he later shot to accompany it. The man might have been a creative genius on a par with xxx, but there’s something about his black-box realization of this ’67 soul number that’s creepy AF. The Beckettian close-ups of his lips and eyes are made even more sinister by his customary bowler-hat and vest, which here take on a distinctly Clockwork Orange feel. “Break it! Break another little piece of my heart now baby,” sings the dead-eyed droog, as he contemplates his next bout of ultraviolence.

How can a bluegrass cover be even better than the original – especially when the original is Elton fricking John? And yet this funky upbeat string version was surely what John and Bernie Taupin really heard in their head when they composed the song in 1972. Alan Munde, Byron Berline and the boys were quick to recognize the song’s “redneck” sensibility, recording their cover within the year on Don’t Give Up Your Day Job.

Sure, covering the Bee Gees’ most famous disco number isn’t new. But the mean-and-dirty take Claypool manages to get on it sure is. The Primus bassist manages to turn the ultimate floorfiller – a song as familiar and family-friendly as your dad’s station wagon – into something frantically alien. It’s compelling, unnerving, and completely unclassifiable. Somebody help him please.

If you’re going to parody a major rapper’s already-pretty-nutso music video – one that includes a guy riding a chariot made of four motorcycles – you’re going to have to bring it. But fair play, Laura Bell Bundy did just that. Her loving bluegrass homage to Macklemore’s epic has everything from flat-footing and line-dancing to a honey hanging off a tractor. Even better, when they sing “whitewalls on the wheels like mayonnaise” there’s actually someone eating mayonnaise. Macklemore didn’t have that.