Somewhere Out There, These 9 Songs from Cartoons Stand on Their Own 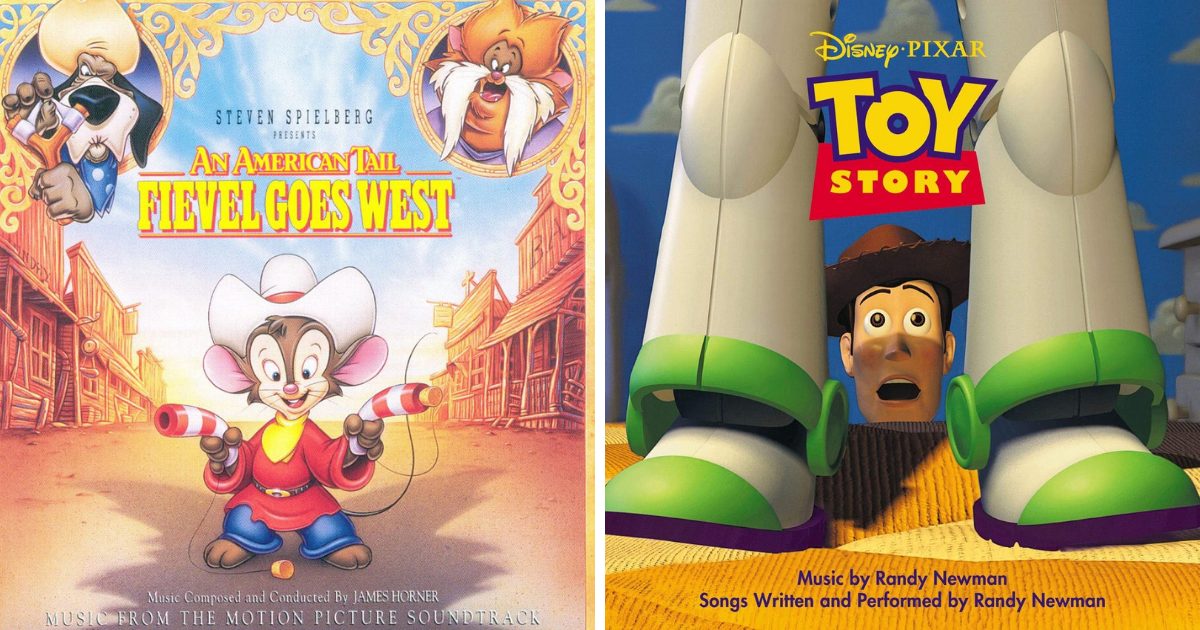 Adults who have happened to spend any amount of time watching children’s TV and cartoons – say Winnie the Pooh, or Looney Tunes, or The Amazing World of Gumball – know that plenty of jokes and gags aren’t written for the kids tuning in at all. Certainly the same fact is true of many soundtracks and scores. Originally intended for younger audiences, these nine songs from popular cartoons supersede their animated film origins. Some have gone on to become modern classics, others popular karaoke anthems, Americana covers, and even a drag queen number or two. No matter the context, each of these songs stands on their own.

Bonnie Raitt: “Will the Sun Ever Shine Again,” Home On the Range

A ragtag group of livestock must save their family farm, “Patch of Heaven,” from a thieving-cowboy-would-be-rancher-and-real-estate-magnate. Along their journey, quite a few problems arise for the cows and crew, and right when you realize all hope is lost, Bonnie Raitt’s voice comes wafting on the Western wind. A nearly perfect, succinct package at 2:30 long, “Will the Sun Ever Shine Again” deserves a spot in the modern country canon. Instead, it’s nearly hidden away on this 2004 Disney release.

Linda Ronstadt: “Somewhere Out There,” An American Tail

Immigrant mice find themselves journeying to America in this 1986 Steven Spielberg-produced classic cartoon, which was so popular a sequel was released in 1991. (Hear a track from its soundtrack later in this list.) The main character Fievel’s sister, Tonya, has designs on starhood, singing “Somewhere Out There” exquisitely and mournfully — and apparently poorly by mouse standards. But her family uses the tomatoes flung at her for dinner. Linda Ronstadt reprises the track on the soundtrack, belting the epic arrangement as only she can.

Randy Newman: “You’ve Got a Friend in Me,” Toy Story

Randy Newman’s soundtrack offerings for all of the Toy Story movies epitomize the central concept of this list: Songs that are just good, whether they’re from an animated film or not. Other soundtracks from the franchise feature Riders in the Sky, Sarah McLachlan, Judas Priest, and Chris Stapleton. All are fantastic, but “You’ve Got a Friend in Me” is certainly the piece de resistance.

Shelby Flint: “Someone’s Waiting for You,” The Rescuers

A haunting, morose, nightmarish — and hilariously entertaining — tale of an orphan kidnapped by treasure hunters, The Rescuers follows two mice from the Rescue Aid Society as they join an albatross to attempt… well, a rescue. “Someone’s Waiting for You” captures the melancholy of loneliness and isolation so well, with a tinge of solemn hope. The classic Disney animation style and southern bayou setting are simply gorgeous and the Golden Age of Hollywood orchestration is decadently nostalgic.

A groundbreaking film for its time, 1977’s Pete’s Dragon combined live action and animation — so we’re sneaking it onto this list on that technicality. Another song from the film, “Candle on the Water,” was nominated for an Academy Award for Best Original Song, but “It’s Not Easy” might be the movie’s best. Helen Reddy, who passed away in September of 2020, had multiple Top 10 hits in adult contemporary and pop. Her performance — on this song and throughout the film — certainly sell it.

Bryan Adams: “Get Off of My Back,” Spirit: Stallion of the Cimarron

Spirit: Stallion of the Cimarron was one of the first feature-length animated films to effectively and seamlessly combine traditional animation with more modern, computer-generated 3D animation. It’s a hugely popular film, but somehow still grossly underrated, and Bryan Adams’ deliciously early 2000s soundtrack is still impeccable. Several songs could’ve made the cut for this list, but we’ve gone with the high-energy, joyfully defiant “Get Off of My Back.”

A ballad and anthem that’s something of a queer rite of passage for Disney millennials: “If I were truly to be myself / I would break my family’s heart….” This rendition of “Reflection” is a rare instance of the score version being better than the credits version. (No shade to Christina Aguilera.) Lea Salonga so relatably embodies Mulan’s longing to live her truth. Just try not to sob-shout along.

Whitney Houston & Mariah Carey: “When You Believe,” The Prince of Egypt

All epic cartoon powerhouse ballad duets must be second to this one, a smash hit from Dreamworks Picture’s The Prince of Egypt. How blessed are we to have Whitney and Mariah trading runs on this loosely Bible-themed melodrama-via-song? If you didn’t start out at the beginning of the song as a believer in miracles, by the end you will. “When You Believe” reached number 13 on Billboard’s Hot 100 chart and was released by Carey on her Number 1’s compilation album.

We simply had to include Linda Ronstadt — and the An American Tail franchise — twice. “Dreams to Dream,” another credits reprise by Ronstadt, nearly blows the doors off “Somewhere Out There” with its soaring modulations and Ronstadt pulling out all of the stops. How one voice, one woman, could out-power an entire orchestra and rock band combined defies reason. Except, with Linda, that level of energy, charisma, and raw presence is the norm rather than the exception. Try to listen through to this song just once. It almost begs being played on repeat.