Soundscapes for the Silver Screen: A Conversation with Steelism 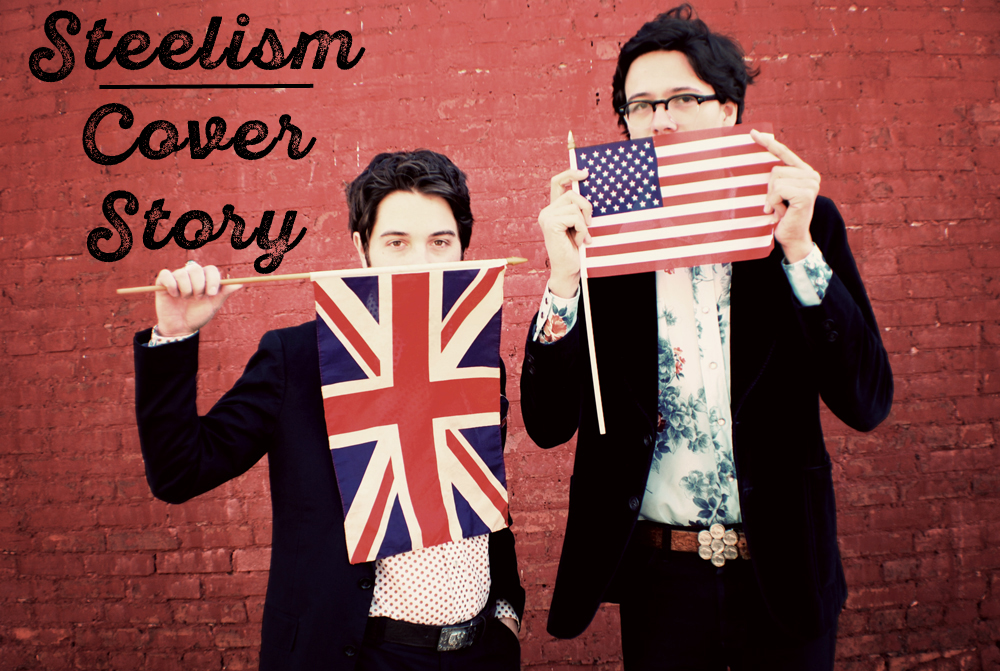 Most music, to varying degrees, conveys a cinematic quality, but for pedal steel player Spencer Cullum and guitarist Jeremy Fetzer — aka the instrumental duo Steelism — their new album ism sweeps across vast film terrain. Influenced by legendary composers like France’s Serge Gainsbourg and Italy’s Ennio Morricone, among an array of classic soundtracks, Steelism’s latest offers listeners a journey through movie genres grounded in and through geographies. Both players are based in Nashville, where they recorded the album, but their travels clearly influenced the resulting soundscapes they explore on their follow-up to 2014’s 615 to Fame. Consider it the soundtrack (of sorts) to a film epic spanning decades, settings, and styles.

Cullum and Fetzer began Steelism after meeting in late 2010 during singer Caitlin Rose’s U.K. tour. Their name came from the fusion of their primary instruments, which both put to use in refreshing ways on ism, pushing past the traditional ideas surrounding each one and fusing a new relationship to the silver screen in listeners’ minds. “Shake Your Heel,” featuring Tristen, conveys the whimsy of a ‘60s British comedy while “Anthem” begins with the forlorn meditation film director Sam Mendes might employ before suddenly shifting into the rippling guitar of a heat-saddled California desert scene. What unites these seemingly disparate threads sits at the nexus of a robust visual sensibility and a lively sense of experimentation. Then, too, there’s the fact that Cullum and Fetzer just so happened to begin recording ism the day after Donald Trump’s election. In an effort to break past the heavy feeling pervading Nashville, they set about chasing a feeling that is emotive, expansive, and vibrant. As a result, their sophomore album offers listeners what many a movie offers viewers: a certain kind of escape-ism.

Let’s talk about the title. You’ve equated ism with bringing together colors and tones like a mid-century modern design, and so the word “prism” springs to mind. But I’m more curious about “ism” as a belief system or ideology. Does that play into the album’s themes in any way?

Jeremy Fetzer: We started recording the day after the election so I think, for all of us, it became an escape, and we did some soul-searching as we recorded the record. So it became our thing that our “ism” was Steelism.

Spencer Cullum: I think recording after the election — and me as an immigrant being rather terrified — there was more feeling involved. I think it helped us, beforehand, having everything demoed and worked out, and then we go in after this terrible election and add a feeling of terrified emotion to it. [Laughs]

JF: I remember driving to the coffee shop the morning after the results, and it looked like everyone was crying. We set up our gear in the studio and were like, “Okay, happy days. Here we go.” 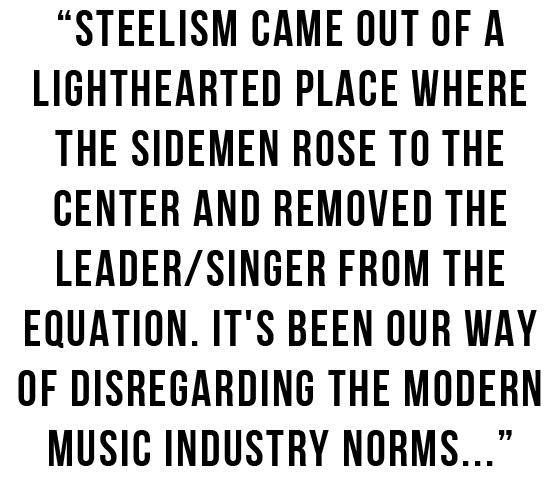 And what does Steelism as an idea or spirit mean to you?

JF: Steelism came out of a lighthearted place where the sidemen rose to the center and removed the leader/singer from the equation. It’s been our way of disregarding the modern music industry norms and seeing how far we can take this project that we all really enjoy.

The cover art especially evokes this ‘70s palette, and you’ve referenced soundtracks from that decade as a particular influence. What is it about the era that inspired you?

JF: I think, with our last record, it had more of a throwback ‘60s sound and, to me, that sounded more black and white. We wanted this to be very hi-fi and colorful, sonically. It’s definitely inspired by ‘70s film soundtracks and Brian Eno productions from the ‘70s, so we wanted that to be part of the cover.

It’s incredibly colorful. On “Shake Your Heel,” you tap into this Italy vibe that reminded me of actor Marcello Mastroianni’s movies and then, on the very next song, “Anthem,” you’re suddenly in the California desert a la Marty Stuart. Was it less about playing with genres and more about playing with geographies?

SC: Yeah, I think it has a lot to do with that, especially with soundscapes of imagining a certain place. There was one song that we wrote called “Let It Brew,” which reminds me of where I used to grow up in the countryside — west coast of England. Every song definitely has a place of where we’ve traveled and how that influenced us.

JF: Right. It’s almost our attempt to create this visual landscape, where it’s like you’re taking a trip with Steelism.

That absolutely comes across in the album. At the same time, it’s undeniably cinematic. You’ve said elsewhere that composers like Serge Gainsbourg and Ennio Morricone influenced you both. What have you learned from them?

JF: So much of their stuff, it’s over the top and dramatic, but it’s also quirky and eccentric. It’s melodic. I think you can hear someone whistling one of their tunes in the grocery store, but then it’s also cinematic and huge in a movie theatre, so it’s trying to achieve both of those things: a pop sensibility and this dramatic landscape that you’re creating.

Do you ever hope to score some day?

JF: Absolutely. I was thinking about that more and more because, in the ‘60s and ‘70s, there were original soundtracks, but nowadays when that happens, it’s rarely ever bands; it’s usually more orchestral, or they’ll have a Trent Reznor soundscape. It’s very rare that there’s original band-style music for films these days.

Right, it seems more common to see an original song added to a soundtrack or score.

JF: Or music supervisors get a bunch of old songs, like a playlist.

So what director would you love to work with?

JF: I listened to a podcast just this morning with Sofia Coppola, and we’re both huge fans of The Virgin Suicides with Air on the soundtrack.

If you had to ascribe your album to a movie genre, what would it fall under?

JF: Some sort of twisted English spy movie, where they fly to America and end up in the desert.

Oh absolutely, but then there’s got to be some kind of Italian villain in there.

JF: Absolutely. Then there’s a layover in Nashville, where they pick up a telecaster for some reason, but it doesn’t totally make sense.

SC: Yeah with the ending in Berlin, sort of vibe.

What do you find so edifying about Nashville?

JF: We’ve both lived here for a while now; I’ve been here for about 12 years, and Spencer how long have you been here?

JF: We both started our careers here as professional musicians, and we’ve seen the city evolve with growing pains, and we’ve both joked about moving away, but I say we’ve come to this point where we love it here and we’ve taken it in. With this record, we wanted to put the whole city into it. We made the whole thing at the same studio in Nashville, and everyone involved with the project lives here.

Right, you tapped Tristen and Ruby Amanfu, such gorgeous vocalists, to come in and heighten what you’ve already created. Do you have a bucket list about who you’ve love to work with?

JF: It’s ongoing. I hope we can make enough records to work with everyone we want to.

Do you see it being pretty Nashville-specific?

JF: As far as Nashville people, we’re big fans of Kurt Wagner from Lampchop, but with each record, we definitely want to do something different. Maybe the next one we’ll do in England or something. We have no idea yet. And we’ve joked about doing a record where we don’t play guitar or steel on it. 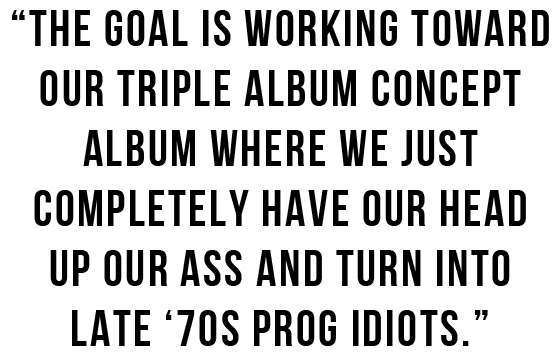 Actually, your sound seems so ripe for a concept album. Have you considered that direction, as well?

JF: It’ll be a triple album.

SC: The goal is working toward our triple album concept album where we just completely have our head up our ass and turn into late ‘70s prog idiots. [Laughs]

There are these statistics surrounding Nashville showing 80 people moving there a day. How have you handled that influx?

JF: I think it’s creating more work and opportunity, but we’re getting more crowded. I live a little farther away than in the shit downtown.

Flashing back to the origins of this duo, how did you know this was going to be a more substantial project than just two musicians getting together and jamming?

SC: We were touring so much with Caitlin — three months straight and then 11 months off. We recorded an EP together, and enjoyed it so much it became the monster.

JF: Yeah, we did an EP as a test run just to feel it out and then, when we started to play shows, people were into it. We found that people weren’t really missing the singer, so we kept it going.