South of London, Broadside Hacks and Others Radically Reinterpret Folk 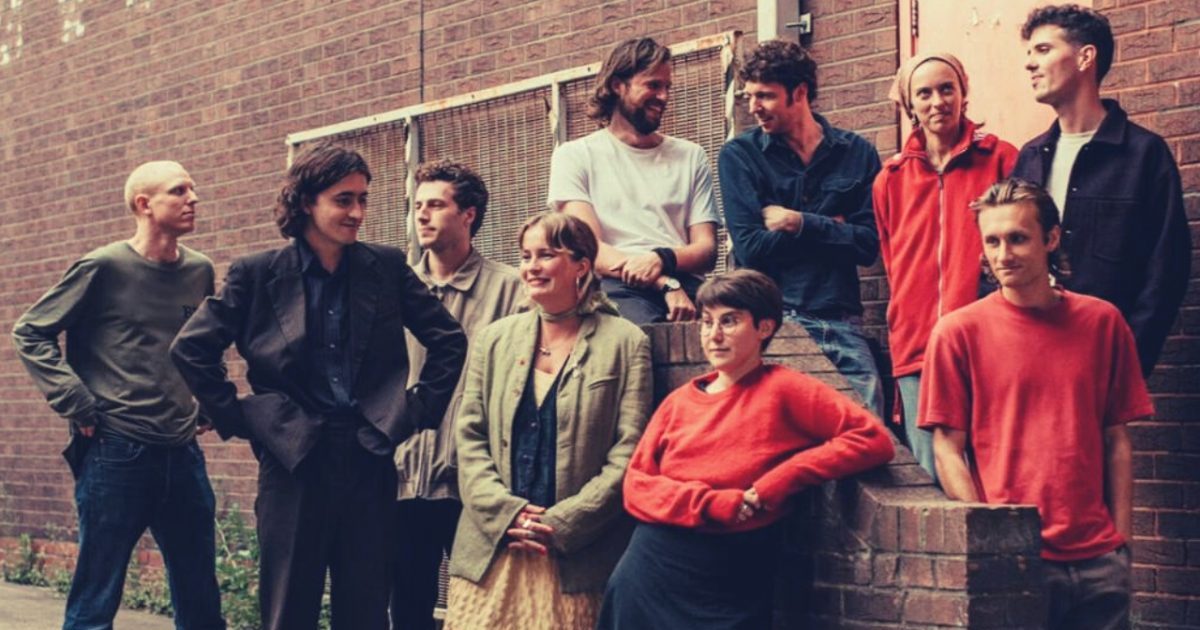 The day before Broadside Hacks flew from Britain to the US for their first-ever SXSW appearance last month, their drummer tested positive for Covid. By the time they played, they had not one — not two — but three separate replacements. “We only had 24 hours to find someone for a 50-minute set,” says Campbell Baum. “So we assigned three different drummers three songs each, and just switched them over on stage.” It was, at least, very much in the spirit of the act: Broadside Hacks is not so much a band as an idea, an ever-shifting collective of musicians formed not to spotlight talent but to bring new life to old songs.

Last June they put out their first album, a compilation of unaccompanied folk songs titled Our Singing Tradition, Vol 1, which ranged from 17th century love songs to Ewan MacColl’s 1949 tribute to the city of Salford, “Dirty Old Town.” The tracklist featured 22 different artists who had recorded their contributions on their phones in tribute to the field recording tradition that has preserved so many of these songs. Three months later, Broadside Hacks put out another compilation, Songs Without Authors, Vol 1, featuring songs whose authors are long lost to the march of time.

What’s fascinating about their commitment to the project — which began life as an informal club night — is that the artists collaborating on it have little background in folk music whatsoever. Baum, for instance, is bassist for indie rockers Sorry, a south London band described by The Guardian newspapers as “the febrile sound of city-dwelling, broke 22-year-olds, whose nights are dominated by hook-up culture and casual drug-taking.” His own parents actively steered him away from folk as he was growing up (“they were jazzers”) and he’d never played it before — “I don’t think many of us had,” he admits. “It was because of lockdown we had an opportunity to dive into something brand new, because you suddenly had the time. It’s really hard in an indie band to make time for anything, because you’re just keeping up with the gigging.”

Naima Bock has known Baum since her teens, playing bass for the all-female post-punk outfit Goat Girl. When he came to her suggesting a Friday night folk club to alleviate the ongoing gloom of cancelled tours and creative malaise, Bock was quick to say yes — she’d been quietly nurturing a yen for folk music since her stepdad introduced her to the proggy delights of Fairport Convention and Steeleye Span. Joining them at that weekly gathering were a number of other indie musicians from London bands like Caroline, Pixx, Maudlin and Modern Woman.

The music they made was exploratory, and not necessarily primed for public performance. “I was a bit sceptical it would work as a live show,” says Bock, and laughs. “When Sam [Fryer] joined he said, ‘Yeah we can’t play Scotland until we’re really good.’” But after their debut gig was warmly received, the project developed a firmer footing — albeit with a fluid lineup that mutated as the various participants resumed their regular gigging. “It was never going to be a traditional band,” says Baum. “It was just easier to call it a collective.”

Broadside Hacks are part of a musical scene emerging in the south of London which might never have existed but for the pandemic. Around the same time as they were coalescing in the borough of Lambeth, one of their contributing acts, The Shovel Dance Collective, was forming in nearby Lewisham. It began with three friends performing some home experiments with folk tunes, mixing Irish jigs with free improvised drone. “Some of it was weird and terrible,” admits Dan Evans, remembering their first gig. “But it was formative. And we had this vision that it would be good to play with more people, so we did a Facebook call-out.”

The nine members of what is now The Shovel Dance Collective are drawn from a rather different pool than Baum’s crew of professional musicians. They share a decided intellectual bent: a mix of academics and artists drawn to the music by its history and its anthropology. For Mataio Austin Dean, who sings and plays shruti box, their mission to rediscover, reanimate and even repurpose traditional songs is “a very political project.” It’s about engaging with the history of the working man and woman — and recognising that those histories are very different from what we’re taught in school.

For instance, when they sing “The Four Loom Weaver,” an economic ballad from the early 19th century, they are very aware that this is a song about a man losing his job to industrialisation — and that its sentiment is just as relevant to many weathering the post-digital world today. “It’s history done through conversation,” says Dean.

Evans nods in agreement. “It connects you through a chain,” he says. “It seems so archaic but you can still be really moved by it. With contemporary pop music, you have so many big songs authored by a single person that are vague in their specificity, about a general emotion that people can connect to. With a song like ‘The Four Loom Weaver’ we don’t know who wrote it — but we know very specifically what happened. It’s a song about a specific event on a specific day at a specific time, but it’s authored by generations, hundreds of people.”

Despite their early forays with Irish jigs, the group have found a unified cause in English folk song: “for me, it’s a way of understanding colonialism and imperialism throughout the last few hundred years,” says Dean. “It’s a decolonial act to sing English folk song.” While the musical culture of Ireland, Scotland and even Wales continues to flourish both at home and among the diaspora, English folk can sometimes be perceived as more austere, less vibrant, and unfairly linked to the grand narrative of imperialism. England is, after all, the dominant nation of the United Kingdom. “But this is also music about people by people,” says Evans. “We don’t push it aside because it’s connected to the terrible associations of what Englishness can mean.”

Bock, similarly, has found her collaboration with Broadside Hacks helping her “to identify with England in a positive way.” Having grown up in Brazil til the age of 7, she found the country “a horrible dark place” in her youth. “I was living here, but not very much enjoying it, always wanting to leave,” she says, struggling with the country’s “disgraceful history” and idealising her Brazilian home. “But because I was born in Dorset, I would love going back there and sitting on the Tor. It was the only place I felt connected.”

She’s since found a deep fascination with the land through the study of archaeology, which has helped bring some perspective to her view of history. “The first dig I was on, in Kent, we were digging up a Roman site, and I realised that to them, they were living in an eternal empire. And now it was just dust, pieces of broken pottery.” She’s since begun reading thick tomes of British folklore and wading through a collection of ballad books in the library. “There’s the history we hear about in books — colonialism, the slave trade, all done by people right at the top — and then there’s the history of working class people who made the land and communities that we have remnants of today. Singing these folk songs is honouring them and their history, rather than the history of the elite, their money and their wars.”

If there’s a charming earnestness about this new movement’s stated aims, it should also be pointed that they are a bunch of precocious talents. Bock is still only 24, and most of this scene are in their mid-20s. Thrysis, one of the acts that forms part of Broadside Hacks, are still in their teens, but their choral classical background lends an unexpected maturity to both their abilities and their musicality.

Of course it’s not just their youth that informs their music — it’s also the fact that they come at folk song from such oblique angles. Their great respect for the singing circles and the songs that they themselves have only lately discovered mean that they are quick to distance themselves from any suggestion that they are, themselves, a new wave of the folk tradition itself. They’re more of an offshoot, creating something new, a radical reinterpretation of songs and tunes that cheerfully carries its own influences with it, whether that’s metal, Americana, or Indian indigenous music. Of course, a stated aim is to elevate the queer histories of the music, and to grapple with its racial and gender politics in a modern way.

You’d worry for them that such big issues, among a wide collective of artists, could lead to disagreement and internal strife. But so far, they’ve managed to avoid conflict. “I’ve been in so many political groups,” says Dean of The Shovel Dance Collective, “but I’ve never been in a group where people are so caring of each other’s opinions and feelings and want to make things work.”

“For me it’s less of a lonesome solitary endeavour as writing songs alone,” says Bock. “And because everyone has their own projects, people aren’t so worried about having their say or being a star. There’s not much ego involved.”