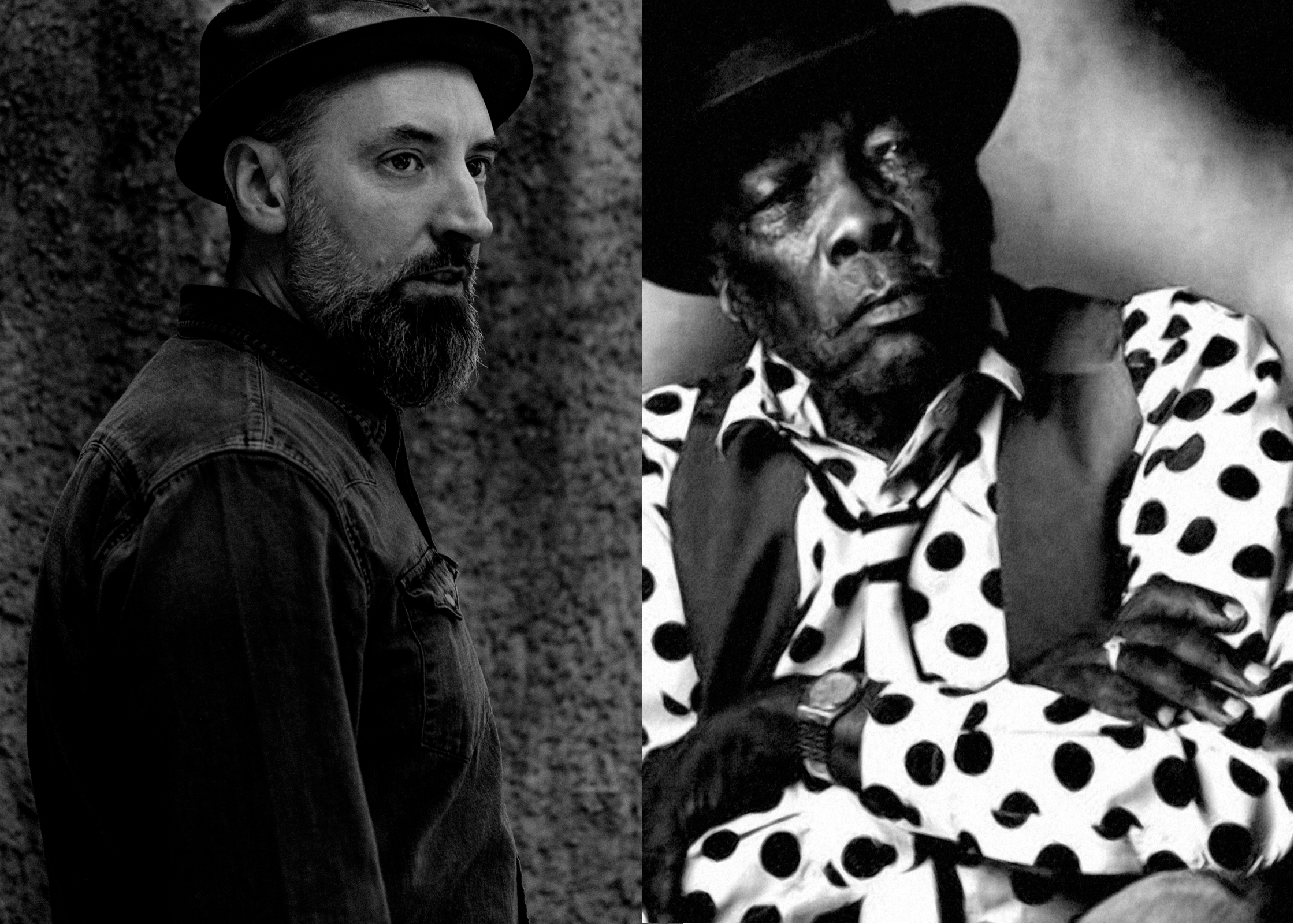 John Lee Hooker, by any other name, will still be the King of the Boogie. And he certainly went by a lot of names — a necessary ploy to make money whenever and wherever he could. The blues legend came from Mississippi and made his way to Michigan, by way of Memphis. In Detroit, he was a janitor by day and a blues man by night, slowly building a sound, a following, and a reputation. A local record store owner took notice and introduced him to a producer, and Hooker took it from there. His career spanned more than 50 years, and he was still at it when he passed away in 2000.

Fink, the stage name of Fin Greenall, is the British phenom who has worked as a DJ, a producer, a guitarist, a singer, and a songwriter over the course of his career. But the thing he always wanted to do was to make a blues record. With Sunday Night Blues Club, Vol. 1, that dream has been realized.

Let’s talk about John Lee Hooker, who I had the pleasure of meeting once in the early ’90s.

Oh, wow. I did some press in Paris, recently, for this blues record. A lot of journalists met him in the late ’90s and they’re all very, very happy that they did, at that point in his life. Just to meet such a legend.

Yeah. For me, it was 1992 or ’93, when I was working at Virgin Records and we were putting out one of his albums. He came through and met everybody. Nothing like shaking the hand of a legend.

Oh, I can’t imagine! I mean, I can imagine, really, especially the hand of someone who’s just been in the business for forever and hasn’t changed his business model one tiny bit in all that time … as a performer, a little bit, but … wow. What did he sound like, when he spoke?

You know what? He didn’t really talk much. He just kind of smiled and said “hi.” It was so striking to me because, at the time, I was working in the legal department and we had filing cabinets full of all the old contracts from Point Blank Records and stuff like that. All the old blues cats had literally signed their contracts with an “X” because they couldn’t read or write. I would read through those things and … they were paid, quite literally, pennies for their work.

Yeah. That’s the thing … I mean, when you try and put together like a retrospective, you’re just diving through filing cabinets of deals whether there are just rights floating all over the place and signed away. Oh my goodness, it just sounds so incredibly complicated. Especially John Lee Hooker, the way that he would also, in the early ’60s, just make up names and sign deals and record albums under other names in different states. I guess just thinking no one’s ever going to know. [Laughs] Which is probably true for most players, but not if you’re John Lee Hooker. It’s almost pre-dating sampling law, in a way. Someone else owns the copyright, but you’re just going to steal it, do it for another label, put it out. No one’s going to know. He just needed $500 or $100 or whatever it was, at the time. I can’t imagine untangling that stuff.

No kidding. So, considering how many different variations there are in blues, what is it about John Lee Hooker’s style and playing that captures you?

Well first off, I can’t believe no one’s picked John Lee Hooker before for your column, so I’m pretty lucky about that. Maybe if I tell you the story of how I got turned on and hooked on John Lee Hooker, it might explain what it is about his stuff that I find so magnetic and resonate so completely with what I think about music. Just to put a background on it, I was a trendy DJ into skateboarding and punk and metal and dance music and electronica, and I was in that period in my life when I asked my parents to buy me a John Lee Hooker record. Actually, I didn’t even say John Lee Hooker to my dad, who is a bit of a music dude. I was getting into blues. I think I’d listened to a bit of Stevie Ray Vaughn, a bit of Jeff Healey, and a few bits and pieces that had been floating past through dad’s mates. I said, “Buy me a blues album because I think I really like the blues.” He bought me a French reissue of That’s My Story by John Lee Hooker which is his second album for Riverside, I believe. And I think it’s from 1959 or 1960 or 1961.

The first thing that really resonated with me, like it resonated with everybody who’s a fan of John Lee Hooker, is just the voice. It’s just so rich. At the time, with the technology and the speakers and the format and mono … that voice will cut through anything. It’s so dark and deep and full that, in the mix, as the producer, there’s not much space for anything else. When he did his Canned Heat records — the Hooker ‘n Heat stuff with the band going on — I can hear the producer struggling with how to EQ everybody else because John Lee Hooker’s voice is 75 percent of the mix. It’s a miracle of a voice.

So, first of all, that gets you. Second of all, the fact that he’s not attempting to, on the album That’s My Story, he’s not really adhering to any songwriting structures. He’s not rhyming. He’s not verse-chorus-verse-chorus-ing. He’s not referencing anything that I’ve heard from before him. He’s not copying Robert Johnson. He’s not showcasing a band. It’s a very intimate experience between you and him.

It’s the fact that he’s got almost no skill as a guitarist and that really, really, really doesn’t get in the way of his journey. It’s kind of like the opposite of Jimi Hendrix who’s got no skill as a vocalist, but it doesn’t get in the way of what makes his music so fucking awesome. So, with John Lee Hooker, it’s like passion over skill to the maximum extent. So the voice was what it was all about and the guitar playing is just a vehicle it’s traveling in. That record changed my world.

Do you think one of the reasons contemporary blues is what it is is because the oral tradition of the blues played such a big part and maybe that skipped a generation or two generations and it just got lost?

That’s a very intelligent way of posing the question, for sure. I mean, that’s almost like saying well maybe possibly what happened was the Rolling Stones and everybody got a bit sidetracked, possibly. And I love the Stones. In fact, “Little Red Rooster” was probably the track which got me into the blues before I even knew what it was, by the Stones. As sacrilegious as it is, I actually prefer the Stones version to Howlin’ Wolf’s version. Sorry! [Laughs]

Oops! There’s my blues Grammy out the window.

Okay, the honest answer from me is “cowardice.” That’s the answer. The emotion has been filtered through lots of different genres since then. Disenchantment, you know the isolation of disenfranchisement, and city life isn’t always hard and is not all it’s cracked up to be so you reminisce about the old days, even though they were terrible, there were some nice things about it. You hear the same sentiments in punk and the Laurel Canyon when they were getting a bit folky and a bit bluesy. It’s been expressed in lots of different ways, but I think maybe the desperation is different. Maybe there’s less tragedy and death is further away from us than it was in the early ’50s, or even in the ’30s.

But the simple answer, to me, is just cowardice. Modern artists in these genres are a bit lazy and spoiled and flabby. They’ll take a bit of blues and sing any old bollocks over the top of it and get a tight band together and got to L.A. and spend $20,000 on a record and wear a hat. That’s not the blues. It just isn’t. [Laughs] I’m definitely fucking my blues Grammy shit up now, but it’s true. It’s so true.