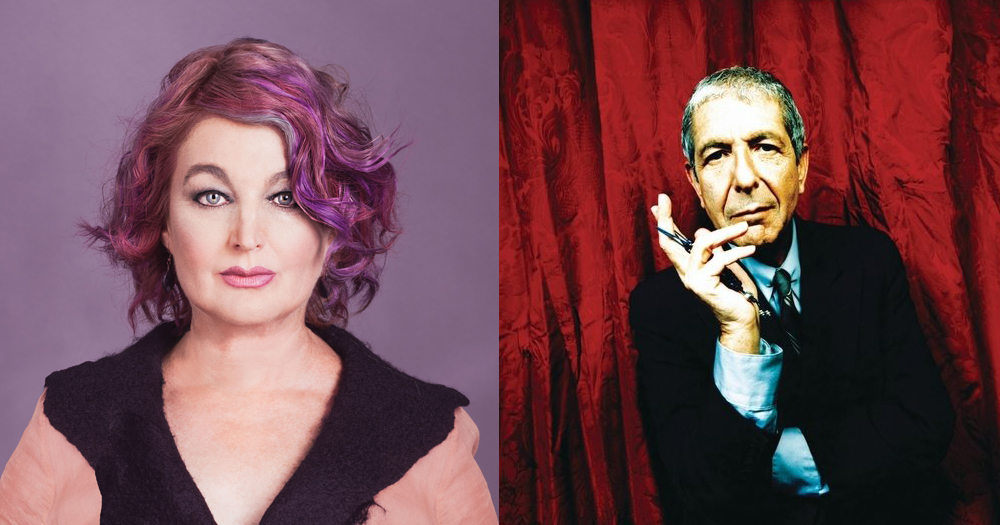 True songwriting heroes are a rare breed and, in roots music, a few names take up more space than all the others combined — names like Hank Williams, Woody Guthrie, Townes Van Zandt, Dolly Parton, Bob Dylan, Joni Mitchell, and John Prine. For artists on the darker end of the spectrum, from Jeff Buckley to Amanda Shires, Leonard Cohen would also make that list, if not top it, because of how Cohen's incredibly mystical and oddly majestic way with a pen burrowed its way deep into the souls of his listeners. For proof of how the song is often bigger than the singer, look no further than the power and proliferation of "Hallelujah," his best-known composition which has been covered by dozens of singers over the past few decades. Tenderness and thoughtfulness pervade Cohen's work, winding their way around and through his sometimes eccentric, always captivating perspectives.

One of the singer/songwriters who came up in the wake of Cohen is Jane Siberry. A fellow Canadian, Siberry has also blazed her own artistic trail littered with mysticism. Reaching back to songs like "Bound by the Beauty," "Love Is Everything," and "Calling All Angels" all the way through to her latest release, Angels Bend Closer, Siberry never shies away from life's big questions and contemplations. Rather, like Cohen, she pours herself into them, exploring every nook and cranny through song and serving as a docent for those willing to follow.

As folks have reminisced about him since his passing, it seems like almost everyone has a Leonard-related tale to tell … either a personal encounter or a meaningful musical moment. You taught yourself guitar with his songs, right?

Yes. When I was 16, I moved away from home. I had played piano up til then. So I bought a cheap guitar and started learning from my sister's guitar songbooks. She had Leonard Cohen's, which had a very clear tablature. It even showed the rhythm of the finger-picking, which was fantastic and easy, so I learned to play his songs. The only songs I learned were from Songs of Leonard Cohen — “Sisters of Mercy” and “Suzanne” and all of those.

Did you have any interactions with him as you were coming up in music?

No, I didn't really. I just always really respected him, when I'd hear him speak in public. I think we met once or twice.

What do you think it was that made him not just so great, but also so special?

Well, I think there are great artists, but there are also ones who are really special in terms of who they are and how they affect people. To me, it seems like many of the ones we've lost this year — David Bowie, Prince, Sharon Jones, and Leonard Cohen — they were all both great and special. And I think their passings have hit people especially hard. Does that make sense?

Yeah. I think it's pretty simple. It's not just about being great. We love them. We love ourselves through them.

In addition to both being Canadian, you are both more than just musicians. Authors, poets, performance artists … was he a bit of a role model for you?

A role model, as a musician, yes. I really thought he was underrated as a musician. I found his chord changes really beautiful and his phrasing beautiful. I think there's a similarity in what we draw from in the musical atmosphere, in that some people say he used a lot of “church chord changes.” That really isn't what it is. It's that there's a completion at the end of the song or at the end of choruses, like Irish folk songs. Like “The Water's Wide,” I think a lot of people would call it “churchy” in the way that the chorus lifts and the way you're allowed to draw out the end like a soft touch on a cheek when you say goodbye to someone.

There's also the similarity in that you both explore deeper emotional and spiritual themes in your songs. Neither of you are afraid of those. So, even a simple-sounding song isn't necessarily simple-minded. It feels like, to me, with both of you, that music is always sacred or has the potential to be. Is that maybe part of that church-sounding potential?

Most of the world, other than the First World, uses music as a way to pray. I think it's natural and organic. Drawn up from our primal selves. I consider music as one of the few ways to connect in a way that's meaningful to so many people. If it works on a lot of levels, it's generous and people can draw more from it — as much or as little as they want because it works on a lot of levels. To me, a good song should sound good, even if you don't know what it's about. It should feel good, whether it's the chording or the rhythm that you tap your fingers to. But, if you look deeper, it's also … I guess I'm saying that a song can be as rich as life is or humans are, if you want it to be. That's multi-purpose, so I guess that's why I said “generous,” if you're offering something in that way. I also consider humor as sacred. Those are the only two places where I go slightly bonkers. Humor and music are sacred to me.

Thinking of those layers of what a song can do … “Hallelujah” feels a perfect song. And not just due to its technical structure or melodic beauty, but also because it can be interpreted so differently depending on who is singing and who is listening.

Yeah. The first time I heard it, I loved that he was describing what he was doing musically — “the fourth, the fifth.” I thought, “Oh, yeah, that's how they do that. Amazing!” [Laughs] Then I started listening to the words … I remember being in Belfast and the opening guest was a choir from Belfast and they sang “Hallelujah.” They all had smiles on their faces. After I said, and I didn't mean to make people feel embarrassed, but I said, “That's the best version I've heard of a song about erotic requests and orgasm and its manifestation.” Because it is about that. And it's like, “WOW. You sing 'hallelujah' and it becomes” … [Laughs] He must have had a good laugh about that, too. Maybe people in the choir knew that and were having their own laugh about it, too. But it's very funny, I think, to hear a choir sing it with a smile on their face. [Laughs]

[Laughs] It was interesting to read up on the song. Different people who've done it have different interpretations of what it means to them. Jeff Buckley agrees with you, but k.d. lang has a slightly different take. But, I mean, he wrote more than 80 verses for the damn thing.

Yeah! Different people have picked different verses to sing and I think maybe the Jeff Buckley version has become a bit of a standard model.

That makes so much sense. I think that's the real way to operate as a musician. You offer different verses to different people and they make it their own. I think that's great. People get so precious about the right words. That's so cool.

I feel like your “Calling All Angels” is also a perfect song.

Someone took the publishing rights to “Suzanne,” so he never got money from it. But, later, his understanding was that that wasn't the kind of song he should ever benefit from monetarily. I see “Calling All Angels” the same way. But, every now and then, when it's in a film, I benefit from it, which I really like. [Laughs] But everything I make goes into more music.

I do feel like there's a constellation of musicians wherein our stars are a bit closer. And I feel that about me and Leonard Cohen and the people who influenced me when I was young, like Joni Mitchell and Neil Young — people I really trusted when they spoke to my 15-year-old ears. I trusted them. There was a connection.

I do connect with Leonard Cohen in that way. I know he talks about how everyone's “in service.” The first temptation is sort of getting the word “service” clear. It's not, “I'm gonna go out and fix the world.” It's more like, “I think I need to clean up my own backyard before I ever use the word 'service.'” I feel so lucky in my life. I always feel rich and that I need to give back. I want to spread the wealth, so to speak.