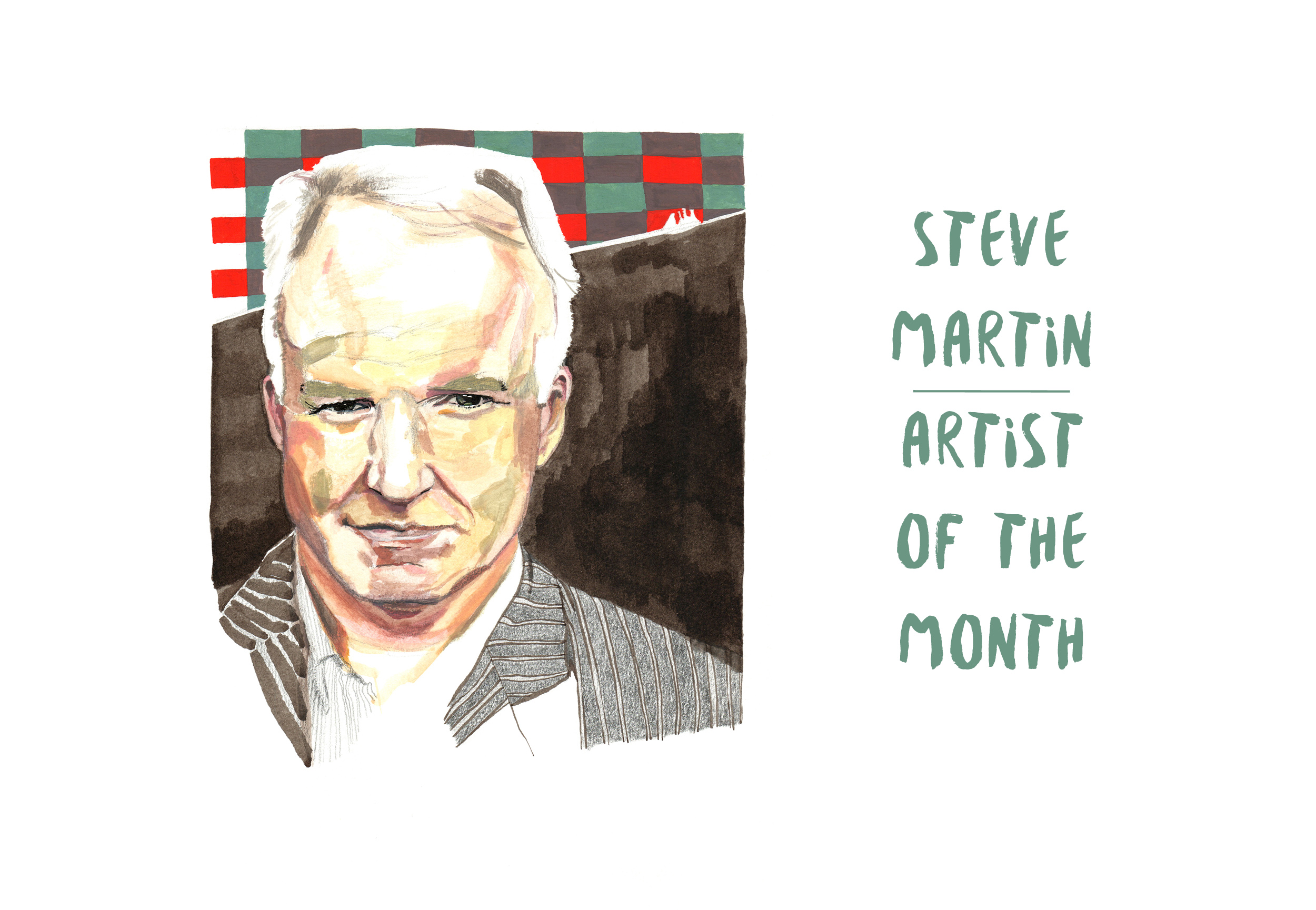 The sound of a five-string banjo has a cosmic pull. When Earl Scruggs first took to the Grand Ole Opry stage with Bill Monroe and his Blue Grass Boys in 1945, his rapid-fire, three-finger picking style shocked and stunned the Ryman Auditorium audience and radio listeners across the country. The standing ovation he received shook the entire building to its rafters with hands clapping, boots stomping, and hootin’ and hollerin’. It was the Big Bang of bluegrass banjo.

Almost every banjo player could tell you the first time they heard the instrument, the first time they encountered its cosmic pull — a personal, introspective banjo Big Bang unique to each person who is struck by its irresistible, joyful, magnetic sound. Steve Martin describes the first time he heard a banjo as his “What’s that!?” moment. “I kind of pin it on the Kingston Trio,” he remembers. “But I know there were earlier things. I fell in love with the four-string banjo, too. When I was 11, I would go to Disneyland to see the Golden Horseshoe Revue, and there was a four-string banjo player. When I worked at Knott’s Berry Farm, there was a four-string banjo player there, too.” His voice shifts to a whisper, as he adds, “But, we all know that five is better.”

He continues, “I do believe it was kind of the Kingston Trio or folk music, in general, that really made the sound like, ‘Wow, what a happy, wonderful sound!’”

He picked up the banjo as a teenager, taking on three-finger, Scruggs-style picking with the help and influence of his friend John McEuen. But, unlike most banjo pickers, who choose one style — Scruggs’ namesake method, or jazz and ragtime on tenor and plectrum banjos, or any of several types of frailing — Martin also had a “What’s that!?” moment with the old-time form, clawhammer: “It was a record called 5-String Banjo Greats and another record called the Old-Time Banjo Project. They were both compilations. So I don’t know who introduced me to clawhammer. When I was learning three-finger and I was into it about three years, I started to really notice clawhammer, and I go, ‘Oh, no. I have to learn that, too.’”

He is a master of both three-finger and clawhammer to this day and, on his brand new record, The Long-Awaited Album, he shifts effortlessly between the two — sometimes within one song.

Through his career as a comedian and actor, the banjo was ever at Martin’s side. It was a part of his stand-up act, it was peppered into his comedy albums, and it made cameos on his TV appearances. It would be cliché to assume that the banjo and bluegrass were a byproduct of Martin’s comedy career, but the instrument was never an afterthought, an addendum, or a prop. In fact, bluegrass and folk music showed him from his early show biz days working at theme parks that humor was an integral part of these musical traditions.

“When I first started hearing live music, like the Dillards or folk music of some kind, they all did jokes,” he says. “They all did funny intros to songs. They did riffs. They did bits. And then they did their music. That’s essentially what we’re doing now.” The silly, whimsical, comedic elements of the music Martin makes with his collaborators, friends, and backing band — the Steep Canyon Rangers — are just as much a testament to Martin’s history with bluegrass as they are a testament to his extraordinary comedy career.

During the seven years that elapsed between their last bluegrass album, Rare Bird Alert, and The Long-Awaited Album, Martin and the Rangers wrote, developed, and arranged the project’s material during soundchecks, band rehearsals, and downtime on the bus. Barn-burning, Scruggs-style tunes and contemplative, frailing instrumentals are sprinkled amidst love songs and story songs, silly and earnest, all steeped in quirky, humorous inventiveness. The album is centered on a solidly bluegrass aesthetic — but bluegrass is not a default setting.

Musical and production choices for each song were pointed and deliberate, with producer Peter Asher, Martin, and the Rangers keeping each song central and building out the sound around any given track’s core idea. “I love the sound of the five, six instruments that are traditionally bluegrass,” Martin clarifies. “That’s all we need. The Rangers, they say bluegrass is five musicians playing all the time. Other music is five musicians not playing all the time. In bluegrass, they have breaks, but there’s always the backup going. There’s always everybody chopping. So I thought, ‘What if we left out some of the instruments? What if we were not playing all the time?’ It really made a different sound.”

By leaving out an instrument here or there, adding in a cello or, in the case of the lead track, “Santa Fe,” an entire Mariachi band, the album’s sound registers immediately as bluegrass, but refuses to be lazily or automatically categorized as such. First and foremost, it sounds like Steve Martin and the Steep Canyon Rangers. “I’ve always loved the idea of the sound of the banjo against the cello, or viola, or violin, because you have the staccato notes against the long notes. The cello or viola contribute to the melancholy and mood of the banjo. But mostly, it’s just us, the seven musicians, including myself. We can reproduce it on stage … except for the mariachi. But the song called for a mariachi band, you know?” He laughs and adds, “There’s almost no way to avoid it.”

Where many bluegrass and folk writers eschew modern vernacular, places, and topics, Martin leans in, embracing contemporary scenarios and themes that don’t necessarily fit the stereotypes of train-hopping, moonshine-running, field-plowing folk music. The Olive Garden, nights in a biology laboratory, a gate at an airport, “Angeline the Barista” … the timelessness of roots and folk music isn’t lost in these themes and settings; it’s enhanced, it’s relatable, and it’s damn funny.

“I’ve written a song about a train, and I’ve written a song about Paul Revere. I think it’s got to be specific for people. They’ve got to go, ‘I know that!’ If I’m writing about a train, I know that 99 percent of people that the song will be heard by won’t really have that experience. But if I write about the Olive Garden and a girl busting up with you, I think a lot of people can relate to that, even if they don’t have that exact experience.”

The relatability and visibility of Martin’s music have brought bluegrass — and the banjo — to countless ears that may have never heard it otherwise. In 2015, the International Bluegrass Music Association awarded Martin a Distinguished Achievement Award with this visibility and outreach in mind. With The Long-Awaited Album; the Steve Martin Prize for Excellence in Banjo and Bluegrass that he awards annually; a national tour of his banjo-forward, Tony-nominated Broadway musical, Bright Star; and a heavy touring schedule criss-crossing the country with the Steep Canyon Rangers and his longtime comedy partner, Martin Short, Martin is poised to continue bringing the banjo to many first-time listeners.