Stuart Duncan’s Coffee Is a Disaster, But His ‘Goat Rodeo’ Fiddling Is Sublime 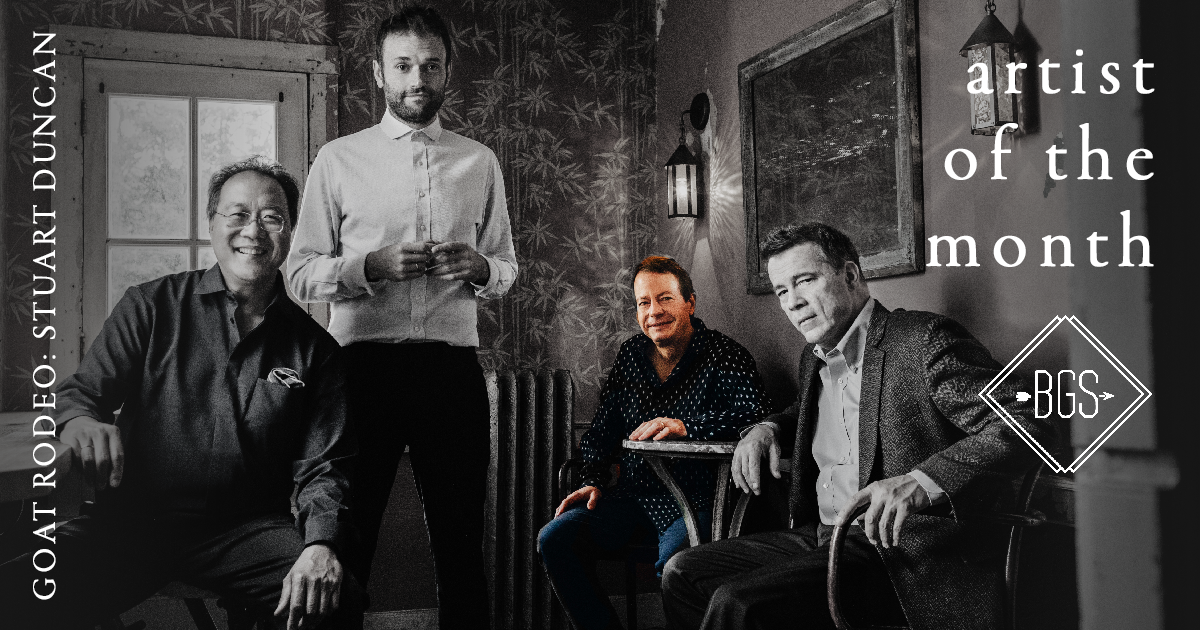 Stuart Duncan, speaking by phone from his home outside of Nashville, is at a loss over how to describe the beautiful dissonance of the just-released collaborative album, Not Our First Goat Rodeo.

“I think all of us have — even if it is nebulous — some sort of idea in the back of our mind of how we’ll sound performing any given piece of music,” he tells BGS. “As soon as a little bit of rehearsal happens, the glue starts to come together within a very short period of time – 10 minutes, whatever – of rehearsing and talking. ‘Here’s where the emphasis is.’ ‘Make your note a little shorter, Stuart.’ Those things come together really quickly. Then it is just capturing the best performance of those ideas and moving on.”

A multi-instrumentalist who’s perhaps best known for his sublime fiddle playing, Duncan has racked up awards and accolades for his work in the Nashville Bluegrass Band and as a highly sought-after sideman for acts ranging from Garth Brooks and Robert Plant to Diana Krall and Panic at the Disco. The final piece to the Goat Rodeo quartet — which also encompasses Yo-Yo Ma, Chris Thile, and Edgar Meyer — Duncan’s virtuosity contributes crucially to the group’s category-defying sound.

This Artist of the Month interview is the first of four installments as BGS salutes the incredible and iconic musicians of Not Our First Goat Rodeo.

BGS: Your first album together (The Goat Rodeo Sessions from 2011) was described as being partly composed and partly improvised. Was that the same approach this time?

Duncan: I would say even more composed, [although] all the material has some improvisation in it. Certainly for me. But there are things that I have to do the way they are written or else it won’t arrive at the proper conclusion — which is what the whole “goat rodeo” name means. Everything has to go just right or catastrophe happens.

This album’s studio session was only ten days for the ten songs, so there wasn’t a lot of time to fool around.

The writing and the sheet music had to be together before we even arrived at the studio or any kind of first rehearsal. The first album involved at least a day or two of rehearsals, and more time for writing. We had like nine months to get that together. This one was more like nine weeks. It came together fast.

We were staying at a nice home in the Berkshires. We had all of our sheet music laid out. Edgar was taking notes. He was the primary copyist — doing the notations for Yo-Yo’s parts, because he was more familiar that sort of bowing. Last-minute tweaks were happening up until the night, even the day, of the first session.

Were there particular musical pieces you brought to the table?

I arrived with little stabs of things for both projects. The most obvious one this time was the pizzicato hammering on thing in “Your Coffee Is a Disaster.” That’s something I had been working on for a long time. It is something that I sort of arrived on while holding my violin in a recording studio waiting for something to get finished in another room. Just noodling around. Holding the instrument like a mandolin and playing it that way on my lap rather than a bow. It took Edgar hearing that and realizing it was the same tempo — or could be played at the same tempo — as one of his other intros. Playing those together kind of started Edgar thinking: “Hey, what if we sandwiched these two ideas?”

So there was a good deal of puzzle piecing the arrangements?

When Edgar’s bowing his bass, and Yo-Yo’s bowing and I’m bowing, we’ve got a lot of bowing. Lots of sustained possibilities. We like to use this to our maximum potential. Like having the violin go down and the cello go up at the same time — and they cross each other in a moment of dissonance. The bass comes in and provides a counterpoint underneath that strengthens that dissonance and comes to a resolution, we hope, at some point.

The middle part of “Your Coffee Is a Disaster” has some of that — counterpoint of violin and cello not arriving at the same note at the same time but a half a beat staggered from each other.

With the minds of Edgar and Chris on compositions thrown in with what I have to offer, as far as improv, it’s a thick soup — it’s a chowder.

Were there instances of too many ingredients in the chowder?

Oh sure, it’s way easy to go too far. Some folks, even some folks close to me, have said that we should have thrown out a few more things than we did. Other people, you know, are perfectly happy. It is an individual thing. I just want to get comfortable enough with what we did in the studio to perform it again live at some point.

Despite the limited time you four have had together, you all seem to have a great camaraderie.

We had to stop each from telling jokes so we could get some work done, or it would be Story City where we could sit there all day and tell stories. It kept people focused on the job at hand. We were so glad to be together again. It was really great, and we hope for more.

And has some communication shorthand developed too?

There were times when little nuances of translations had to occur between something that Yo-Yo would say to Edgar because Yo-Yo would know Edgar knew what he meant, but maybe wasn’t so sure he knew that Chris would know. Some deep Latin term from the classical world. So, Edgar would then translate the question to Chris, although Chris would probably know a lot about classical music. There were a couple times when Edgar had to reframe the question to ring Chris’s bell, then Chris would have to translate it to me. It would have to go around in a circle before I would understand what was being talking about.

There were some bowing things that happened where I was equally as frustrated at getting it right as Yo-Yo. I remember one time Yo-Yo said, “Why is the bowing so different for this [song]?” It was a piece that I had started writing on the mandolin. And Chris said, “It wouldn’t seem weird to you if you ever wielded a flat pick.”

Is everyone’s very broad musical interests a key factor to Goat Rodeo being such a unique collaboration?

Completely, definitely. Not just because we all have wide interests musically, but also you are dealing with two monster composers who can weave all of that information into something believable, however unlikely the premise might be.

I’ve also heard Yo-Yo say in interviews that he’s listening to everyone else at the same time he is concentrating on playing. His ears are open; he’s not just using his eyes and his musical abilities. That’s a huge important thing for all of us. Because of what other people do, it influences what we do.

We are completely used to that in the bluegrass, jazz, swing worlds where we are trading licks. Someone plays a lick and you echo what they play. Then make it your own and it goes back around. But when you’re dealing with a written piece of music, that is played the same way each time, there are other things you can listen for with each other. Where the note lands. Where someone else is feeling a flourish or a cascade of notes.

Also, you have someone like Edgar, who can write something into a piece of music that sounds like improv. He know to leave a space as if someone was thinking of the next thing to play rather it being right there. He’ll leave a few rests in there as if someone is playing off the top of their head. Leaving space for the listener.

Apart from all of bluegrass, old-time, jazz, swing, and blues that I grew up playing, loving and still worship, one of my favorite recordings is the Bach: Complete Sonatas & Partitas for Solo Violin by Arthur Grumiaux from the early ‘60s.

You can spend decades appreciating different kinds of music and then you think you don’t like classical music that much or it doesn’t hold your interest. Then somebody hands you something like that and says, “Check this out,” and it blew me away. I’ve been a fan of that recording ever since.

My sensibilities of how to perform a piece of music with Yo-Yo Ma were changed by hearing that recording. I became more sensitive to what was required from a violin to play that kind of music. The more aware, the more you can immerse yourself in what your instrument is capable of doing.