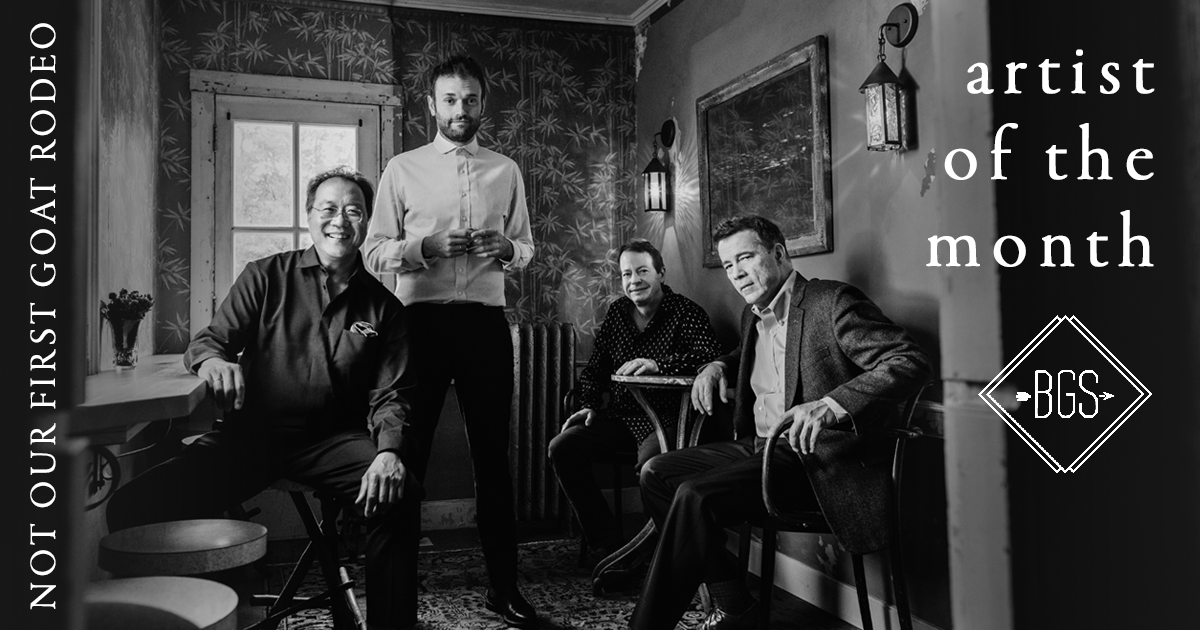 A remarkable blend of improvisation and composition, Not Our First Goat Rodeo is the just-released second volume of music from four American acoustic icons: Yo-Yo Ma, Stuart Duncan, Edgar Meyer, and Chris Thile. The eclectic group chose their name based on the aviation term “goat rodeo,” indicating a delicate situation in which 100 things need to go right to avoid disaster.

That intricacy is apparent throughout Not Our First Goat Rodeo, and so is the band members’ mutual respect and sense of joy that stems from collaboration. One such example is “The Trappings,” a cinematic piece featuring Aoife O’Donovan, who lent her talents to the first collection and returns as a guest vocalist for the new project, too.

Sharing the story behind the track, Yo-Yo Ma recalls: “‘The Trappings’ came out of a question of aesthetics. I believe Edgar was talking about pop music, how he used to think, ‘Oh, if something’s too poppy, I’m not going to like it.’ But that’s like saying ‘classical music is boring,’ or that jazz, rock, rhythm and blues are one way, or even ‘people from different countries are’…. You know that as soon as you make a general statement like that, it’s not true, because you can think of hundreds, thousands of exceptions. ‘The Trappings’ is one of those.”

The group’s initial set, 2011’s The Goat Rodeo Sessions, is a classical crossover masterpiece that won Grammy Awards for Best Folk Album as well as Best Engineered Album, Non-Classical. The critically acclaimed project also spent 11 weeks at No. 1 on Billboard‘s bluegrass albums chart. Nine years (and many other outside projects) later, the group’s camaraderie and undeniable chemistry remain intact.

Yo-Yo Ma observes, “What is so amazing about playing with Chris, Edgar, Stuart, and Aoife is that when I’m working with them, I’m almost not a full participant, because I’m actually a fan. I’m such a big fan that I approach what they’re doing with a mixture of wonder and awe at these fellow musicians whom I feel very close to, but who are doing things that are almost beyond my imagination.”

This month BGS will conduct interviews with each of the ensemble’s members about Not Our First Goat Rodeo as well as their individual inspirations and insights. Check out our Tunesday Tuesday featuring “Voila!” and enjoy this brand new Essentials Playlist featuring music from Yo-Yo Ma, Stuart Duncan, Edgar Meyer, and Chris Thile.